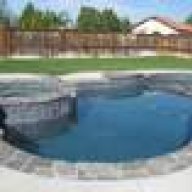 Thanks Paul. If I win, I'll give it a shot and see what happens.

I ended up cancelling my bid on that incorrect transformer and I got the correct one in the mail this afternoon. After I hooked it up, the system now turns on. Great!!

BUT... I don't seem to be generating any heat! More pictures...

Can anyone tell me why? I have the gas flowing and the heater igniter button in the on position, so what's up now?

You need to push the remote button on the heaters front panel. This tells the heater that your automation system is controlling it to turn on/off. Also the LO tells me that maybe your pump isn't running or you have no flow due to the valves not in the right position.

Yep. I was able to figure it out Paul. I didn't realize that killing the main breakers would set it back to default. I had it turned on from inside the house at the remote panel, but didn't have it turned on at the heater itself!

You can't really see it from the picture below, but I finally have a HEATED Jacuzzi again!! Thanks for everyone's help. Thankfully it was only a $40 part and VERY easy to replace. I had nightmares this was going to cost me a fortune.

Okay, update. One thing I noticed last night is that the temperature indicator on the front of the heater itself shows 10 degrees hotter than the temperature indicator on the remote inside the house. It never used to do that (they were both within a degree of each other), so is there a way to synchronize the two? Last night the heater indicated 103 degrees after it heated all the way up, but the remote only showed 93 degrees. Not really a big deal since it really is heating up to 103, but it's just one of those things that's going to bug me!

The heater and the remote use two different temperature sensors. The heater uses a sensor internal to the heater, while the remote uses a sensor that is typically somewhere on the equipment pad plumbing and is wired to the main automation box. The two sensors often disagree with each other a little, but not normally by that much.

One possibility is that the wiring on the automation system temperature sensor has been disturbed and is no longer making a solid connection.

I believe the automation system will allow you to calibrate the temperature reading.

I think I found it. On the remote there's an advanced section where you can calibrate the air and water temperatures. The next time I turn on the heater, I'll calibrate it then.