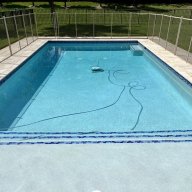 I currently have no automation but the previous owners had the pool built with Pentair Globrites. Four in total with two of them in the bubblers. They are currently all wired on the same transformer with a basic wall switch. I will be eventually adding full automation with Intellicenter as I move the rest of my equipment to pentair over time starting with a variable speed pump to replace my 2 speed.

My question is can the Color Sync Controller work with Intellicenter later on if I add one now or does it not work once I migrate to intellicenter? It would be nice to have a physical switch for people to enable without app access. I looked through both system manuals and couldn't find anything.

In the future I might run the bubblers on a separate circuit than the main pool lights to allow different color groups. In that case I would need 2 physical switches for each group.
Last edited: Oct 6, 2021

What would you want the IntelliCenter to do with the lights if you keep the Color Sync Controller?

I am not sure if things will conflict if you tell the IC the lights are Globrites and both the IC and the Color Sync Controller try and change their colors. I think the two systems would get confused and lose synch with the colors set. You can give it a try when you get your IC.

Looking at it more there would be conflicts of control.

I might look into building an interface into nodes-poolController to control it through Lutron Pico remotes with my RA2 system with the intellicenter. I could also have it integrated for other things like valves to enable the bubblers. I hate the remotes they sell for Intellicenter. They look so dated. A nice sleek panel that can be wall mounted would be so nice.
R

nodejs-poolController sends the correct number of on/off sequences to IntelliBrite protocol lights without IntelliCenter or ColorSync. You simply set up a circuit and tell it the light protocol and it will flip a relay the correct number of times for the light shows and colors. The connection to the lights are typically done using a relay hat on the pi such as

Now that being said if you have an IntelliCenter the ColorSync controller is not required or desired since the light control is done via software on the IntelliCenter board.
Reactions: MyAZPool
You must log in or register to reply here.
Thread Status
Hello , This is an inactive thread. Any new postings here are unlikely to be seen or responded to by other members. You will get much more visibility by Starting A New Thread