We are considering laying this river rock-like tile down on our entire Baja shelf (8x18, 18" deep) I have searched and searched but can't find any photos or examples where others have done this. We have never had a pool before so we don't know if there is an obvious reason not to use this kind of tile. I realize it is on mesh instead of paper, but I think there should be plenty of grout to keep the rocks from popping out. Am I missing something? TIA! 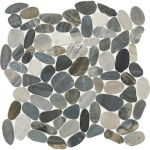 as long as the tile is under water rated it will work, if not I would not put it in.. get with the company and ensure it can be installed in a pool... You not going to find many pictures for this type of install as not many do it... there are "some" all tile pools (I am doing one soon) but not many..
D

That's what I was afraid of. I figured there would be one or two but I can't even find that many! We are only doing the Baja shelf, not the whole pool. We may do a border or a frame on the deeper section; haven't decided yet. Thanks for responding.

@Dirk has that has his waterline "tile" and it is so pretty! IF I were building a pool and putting in a shelf I would think about using this on the shelf IF it is not too slippery. Can you get your hands on some to test out how it is when it is wet?

Works underwater in my pool! It's not tile, or any sort of composite material. It's actual slices of river-rock, so I would think it would be as "pool proof" as it gets.

This would be my only caution. My step markers were set in mortar a few days before the pebble went in. I think maybe the combination of the tiny pebbles, the very thin spaces between some of the rocks and the skill level of the guy working that section of the pool left things a little less than desired. The rocks are not perfectly even with the pebble, they're a bit low, like indented a bit. Which is not that big of a deal for step markers, but you wouldn't want a whole shelf like that, where all the pebble "grout" was raised (or lower). So either you need to keep an eye on that, while it's going it, to make sure the guy does a good job, or have them do grout, and a perfect job of it, so that the overall feel is nice and even.

The grout (or plaster or pebble) lower would be worse, because unlike most tile that has a slightly rounded edge, the rocks are sliced very square, so their edges are "crisp," almost sharp. Perhaps that's why my guy made them a bit recessed. If they were above the grout, you'd definitely feel the edges on your skin (feet or backs of thighs or whatever). If you have tile elsewhere in your house, you can get a sense of this. Look for a tile that was cut, one that is smaller than the others. Run your finger across the cut edge and you'll get the idea.

Either way, be sure to have a conversation with the PB and the tile guy to make your expectations well known about those aspects...

Definitely not discouraging you from doing this. I think it would look fantastic, and very unique. I have river rock in a few other places in the landscaping around my pool, and while I doubt anybody else notices, I love the way they compliment each other.

That is so nice! Thanks for sharing your photos and your experience. They do look beautiful and I love the natural look.

We are deciding between the river rock and the lightstreams tiles, admittedly two wildly different looks. Our final decision is going to rest on what finish we choose; our PB is not a fan of any of the aggregate pool finishes -- he thinks white plaster is the least problematic and therefor the best. His finisher can color the plaster (we are looking for a dark look, just like yours), but they caution against mottling and bleaching back to white within several years. His finisher does seem to like the Hydrazzo product, which is of course at the top of the pricing spectrum.

So whether we go with the river rock or the lightstreams tile, depends on which finish we choose.

No telling what motivates a PB, just be aware that a lot of them "recommend" things based on what they know how to do, not necessarily what is best. And of course, what they can make the most money on surely can come into play. Researching here is good. Broaden your research even further out, if you can. Ask anyone in the industry you run into. I like a dark pool, dark water. White plaster will make for light blue water. To each his own. My previous plaster mottled. This newish pebble is already mottling. They all do. While would show it the least, if any, I expect. But wouldn't it show all sorts of other discolorations, too? I wouldn't know. I just know I can't wear white shirts!!

Whatever you end up with, it'll be fantastic, because it'll be what you like!

I will say I LOVE how the lightstream looks but and this is a big but be very careful with picking them. Make sure you check with your tile setter that they know HOW to set them as they are very difficult to do correctly. Timing is VERY important. Go to their web site to see what I mean. THe shell has to be cured ?? long before they are installed and they have to be installed just so.
D

S
Stressed out over choosing tile for back pool wall - newbie!

B
Infinity edge... tile, epoxy, and other thoughts

Feb 7, 2021
biggreydog
B
H
What waterline tile to pick for the natural look?