I've searched and searched but for some reason I'm not having luck finding what I thought would be simple.

Currently, we have an Amazon Echo out on covered back porch. We stream Amazon Music and playlists we have created, and it's awesome if you are on the porch. However, when you are in the loungers a little further out, it's hard to hear unless you bust eardrums on the porch....SO, I thought I'd just buy a couple of outdoor speakers that could "pair" with the Echo. Surely those exist. Right? RIGHT?

I definitely want a solution outside that is amazon friendly because that's the only thing we listen to. I don't really want to spend a ton, because I don't think I should need to (how about that for reasoning?). In a perfect world I'd have a speaker on porch (like now, with the echo), and it would also play in two spots on either side of the pool. One of those spots has a plug, the other would need to be wireless.

Can someone make a suggestion? I don't really care that the speakers sound perfect....just want them to be waterproof by the two pool ones (patio is covered and protected, so that one doesn't have to be).

Thanks so much. I'm hoping I just haven't seen the perfect solution yet. I've tried the solution of just a portable bluetooth speaker out by the pool that connects to my phone...don't like that at all. They have always had connection problems and I really prefer something that is permanent and self sufficient.
J

you can get a second echo and run the two as a group. then you’ll have separate volume controls
C

jmikeb said:
you can get a second echo and run the two as a group. then you’ll have separate volume controls
Click to expand...

I'm worried about a second echo on the outside location because they are not weatherproof. The outside speakers won't have any protection from the elements.
K

You have a lot of options. If you can wire speakers you can run them from an Echo Amp. If you dont want to do that you can buy battery packs for the different types of echos. Here is on for a dot.

Amazon.com: GGMM D3 Battery Base for Dot3 to Make Dot3 Portable, Black (Not Include The Speaker): Electronics

Amazon.com: GGMM D3 Battery Base for Dot3 to Make Dot3 Portable, Black (Not Include The Speaker): Electronics
www.amazon.com

They are not waterproof but for the price you cant beat it.
G

You probably want the Ultimate Ears Blast or Megablast. They are waterproof, wireless, rechargeable, and you can pair two of them for stereo sound by the pool if you want, or up to 8 in mono if you just want the same music playing from multiple places.
C

Ultimate Ears may be best bet...I was hoping for more in the way of responses and that I was missing something. Can't believe Amazon hasn't developed an outdoor option for Alexa. 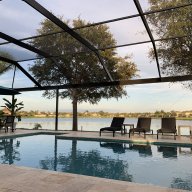 You need a speaker that is compatible with Alexa. Also it needs to be a wifi speaker if you want to use it at the same time as your echo on the porch. If you don't care to use the echo then a bluetooth speaker will work. This is what I'm working on now. Here is a few examples.
Let's say you have a regular wireless/outdoor bluetooth speaker. You open up the echo on the alexa app, set your speaker to bluetooth pairing and in the app sync the echo with the speaker. Now you have the speaker by your pool. But this eliminates the sound coming from the echo on the patio.
Here is another example, If you have a wifi enabled/smart speaker that is compatible with alexa you can create a group in the alexa app. Add your echo on the patio, your new speaker and whatever other speakers or echo's you want to that group. Name the group, open the alexa app and play your music, send it to that group.
Sonos just released the Move speaker. It's a waterproof wifi enabled speaker. That could work. Or maybe try the UE Blast, since they are wifi capable.
Right now I only have echo's in my house and I have them in certain groups. I have one group called First floor, this plays music on the echo show, the echo on the patio and in my garage. But I have another group called backyard, that will play the patio echo speaker, and the echo show. If I want to I can add another echo dot and just add that to the group but sync it to the bluetooth speaker and take it to the area I want to play it.
Hope this makes sense,
Jason
M

If you can wire some outdoor speakers you can connect to them with either the Echo Amp as suggested above, or you could get a small cheaper amp and take the output from an echo dot. I'm doing this with Google Chromecast audios, but it would work the same way.

I bought a couple pairs of these speakers, Dayton Audio IO655W, a couple of these amps, Lepai LP-2020TI, and some speaker wire. Connect the speakers to the amps, plug the chromecast audio or echo dot into the 3.5mm input on the amps. I grouped the Chromecast Audio devices in the Google Home app and have a google home mini in our pool box that we can give commands to, and the default playback device is set to the group of chromecast audios. It can get really loud - the amps are only turned up half way with the volume on the chromecast audios set to 30% most of the time. Usually turn it lower in the evening. The most difficult part was running the wire through my attic, but once I got that done it has worked great.

You can install the Alexa app on your iPhone or Android. Then any Bluetooth speaker will work with your phone providing the source material. That's what we've done.

BowserB said:
You can install the Alexa app on your iPhone or Android. Then any Bluetooth speaker will work with your phone providing the source material. That's what we've done.
Click to expand...

I second this, except I use the Amazon music app, which supports Alexa. There are some great, inexpensive Bluetooth speakers available.
C

I went with the Ultimate Ears Blast...bought two of them so I can pair them with one on patio and one out by pool. They have built in Alexa so I just play our Amazon Music playlists. Got them on amazon, and bought refurb units to save a little. Love them....great sound!
Reactions: JayRi

Cody said:
I went with the Ultimate Ears Blast...bought two of them so I can pair them with one on patio and one out by pool. They have built in Alexa so I just play our Amazon Music playlists. Got them on amazon, and bought refurb units to save a little. Love them....great sound!
Click to expand...

Cool, you can link your alexa with Pandora, Spotify etc. Then create playlists there and play through the alexa app. I find I always play music from Spotify. If you get the subscription it plays higher quality audio and no commercials. Well worth it. We have the family plan and everyone enjoys it.
R

Insulation and venting for an outdoor kitchen.