New to solar cover, no reel yet, a few questions

We just cut the solar cover to fit the pool. Half of the stairs are exposed, also with gaps between the cover and pool wall due to the cutting. We do not have the reel yet, and have been just dragged up the cover when not using it and put it on the deck, and put back after swimming.

I've seen the pool school reading suggest against leaving the solar cover on deck under direct sunlight. My question is, without reel, where do you guys normally put the solar cover when it is off? I have enough deck space, but it is surrounded by plants and stuff, and difficult to keep it clean, and I do not want to drag a lot of dirt and other stuff into the pool afterwards. I do also have fence, but the cover is almost 17 by 36 ft, so would be difficult to unfold and hang it on the fence. We put it on the circled out space now when it is off, not sure if that is ideal.

Another thing is how frequently do we need to open it to let pool "breathe"? I read quite a bit threads on solar cover here, and have been trying to maintain sufficient FC level to avoid algae (cya 30, and I've been keeping the fc at 6.5 every evening, and with cover on during the day time, it consumed about 1-1.5ppm in a hot sunny day, compared to my previously 2-4ppm without cover). We only put it on since Saturday (opened it up on Sunday for an PM swim, and back on. It was lifted up partially when adding LC at dusk for about 30-45mins every day).

Any tips/tricks dealing with the solar cover in my case would be highly appreciated. 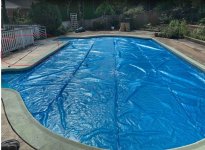 For your setup I would get a reel as it becomes easy to remove and put back on... I cover mine only when it is going to be on the reel for days or weeks during the summer... When it is on the reel for an hour or 2 I do not cover it... I use a white drop cloth to cover mine

We leave ours on except when swimming, then we just bunch it up (fan fold it) on the deck. Sometimes we only pull enough off for a quick dip or a few laps. On occasion we have cut iit n three peices to make it easier to get off or just pull one piece off. Never had a reel, 30+ years, but an automatic one would probably be nice.
S

Another question, how to clean debris, leaves and rain water accumulated on the cover?
You must log in or register to reply here.
Thread Status
Hello , This is an inactive thread. Any new postings here are unlikely to be seen or responded to by other members. You will get much more visibility by Starting A New Thread

A
solar cover without reel

Everything Else Nov 2, 2021
JasonParker
J