My solar install went in over the last couple of days (with massive bonus points to the company for also moving some PV electric panels elsewhere on the house to make room), and today is the first full day of use.

I noticed it immediately during the walkthrough yesterday but wanted to give it a few more hours to be sure, but I am pretty sure I have a vacuum issue. When the pump flips into low speed, I can hear the VRV pulling in air, plus lots and lots of large bubbles in the down pipe from the roof, and coming into the pool.

A few notes:
- The panels are installed on garage roof (first story). Lowest end is probably 10ft, and highest point is probably 16-18ft.
- I asked them to plumb it 'opposite end' style instead of send/return on the same end to absolutely make sure that the water is forced through the entire array and won't try to sneak through the shortest path (even though the Fafco recommendation is for same-side)
- VRV is installed at the very top of the system, on the send side.
- Freshly filled pool (last weekend), with clean filter (also cleaned last weekend).
- Pump pressures read: High Speed: 16psi, 27psi with solar on. Low Speed: 0psi (needle does not move), or 7psi with solar on.
- Low speed pre-solar runs a combined 18gpm or so to the pool. I haven't measured yet post solar, but the water speed at the return eyes feels much lower.

I will attach a picture of the plumbing in the next post. Based on my reading of all the threads here I think everything looks ok (except arguably the SWG being before the panels). Since I have a robot vacuum I have bypassed the booster pump (the hose) and I plan to cap that off soon.

Any thoughts? My first idea is to move the VRV from the top to a lower elevation (so maybe the lower end of the panels) to see if that helps. Ideally I'd like to avoid having to switch out the pump for a variable speed, and I definitely don't want to have to run the whole thing on high all day long. 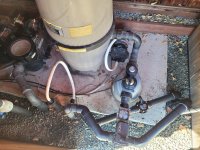 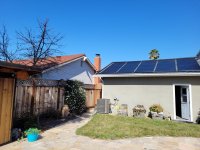 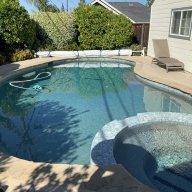 If the vacuum breaker is partially opening on low speed then you are not moving enough water through the panels. Typically you want around 5 gpm per panel and the panels get more efficient with higher flow rates.

Your flow rate of 18 gpm is low for the 5 panels that you have. You don’t have enough pressure at the top of the array to keep the vacuum breaker closed. You may have to run the solar on high speed.

I have the same problem if I have my solar running and have the variable speed pump too slow. 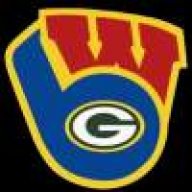 BenB said:
Any thoughts? My first idea is to move the VRV from the top to a lower elevation (so maybe the lower end of the panels) to see if that helps. Ideally I'd like to avoid having to switch out the pump for a variable speed, and I definitely don't want to have to run the whole thing on high all day long.
Click to expand...

This is what I did. I moved mine from the top header to the lower, and it works great. I was getting air with a single speed pump.
S

What they said, not getting enough flow through the panels. Also, a couple of additional thoughts: 1) some panel manufacturers integrate the VRV into the bottom panel header, so moving to lower header may help 2) when I replaced my panels, the integrated VRV leaked due to manufacturing defect 3) I have a VS pump and had to tweak the RPMs to ensure VRV seated but also a control system that only ramped up pump speed when there was solar heating demand

I had a productive morning! Fertilizer and weed the grass, removed a Ring camera we don't need anymore, and.... swapped the end cap and VRV from the top to the bottom. Immediately fixed it - no more constant sucking of air on low speed!

I realize that the reduced volume of water going through will reduce the efficiency of the panels, but that in and of itself wouldn't cause the VRV issue - that's all about the pressure differential in the system where the return side from the roof was draining faster than the feed was providing.

This weekend I'm going to cap off the 2nd return going to the old cleaner outlet, which will increase the back pressure a little bit more, and lastly am looking into some new return eyes to further increase back pressure and increase exit velocity of the water.

Thanks for the input folks!
You must log in or register to reply here.
Thread Status
Hello , This is an inactive thread. Any new postings here are unlikely to be seen or responded to by other members. You will get much more visibility by Starting A New Thread

Everything Else May 4, 2021
Jknelson65
J
W
Large bubbles/low flow in Solar Pool Heating after Relocation