I only wish/hope you have a pic of where the barefoot print is before the water went in.

Keep working with OnBalance and let us know how the face to face goes. I would make sure I had a note pad and take notes. Let him see you writing down what he says. THEN follow up with an email along the lines of "Here is what was said at the meeting on xx date" and lay it all out.

Kim those pics without water sure looks good to me for him regarding the marks. U see those a few posts up?
R

Have a meeting with the PB set for Wednesday at his office.

That will give me a few days to get everything organized so I can go in with all the facts needed. Already started printing out pictures and backup information.

I am beyond thrilled and relieved that I have those pictures before the pool was filled. Really just puts to rest any water chemistry debates. Going to push for a complete chip out and pebble upgrade, after all I have been dealing with this for 3 seasons now.

jimim said:
Kim those pics without water sure looks good to me for him regarding the marks. U see those a few posts up?
Click to expand...

I saw them but was really wanting the barefoot one BEFORE water went in.

rccarps2 said:
Have a meeting with the PB set for Wednesday at his office.

That will give me a few days to get everything organized so I can go in with all the facts needed. Already started printing out pictures and backup information.

I am beyond thrilled and relieved that I have those pictures before the pool was filled. Really just puts to rest any water chemistry debates. Going to push for a complete chip out and pebble upgrade, after all I have been dealing with this for 3 seasons now.
Click to expand...

Dirk said:
OK, if there is a creek involved, and your pool water would not absorb into the ground, that is another matter. Though I still contend waiting until spring will not make a significant difference to the environment. As I said, chlorine and pH are a non-issue. But the salt would be the problem. Local or state authorities might have something to say about dumping a saltwater pool into a creek, which means some lake downstream. Do some research, for sure. Fines could fall into your lap, ultimately.
Click to expand...

Chlorine is an issue. Apparently a big issue. My local water supplier was fined $893,000 for dumping tap water into creeks because of the Cl content of tap water.

Rocket J Squirrel said:
Chlorine is an issue. Apparently a big issue. My local water supplier was fined $893,000 for dumping tap water into creeks because of the Cl content of tap water.

Oh, I was a little vague there. I didn't mean to imply that it was OK to dump chlorine into a creek. It's a non-issue because, unlike salt, ph and chlorine can be neutralized before pumping the water out of the pool...

Regardless, before you empty a pool "into nature," you need the local authority's blessing. This is not a case of "better to ask forgiveness than to ask permission." Not only do I hate that stupid saying (made up by someone who thinks it's OK to do whatever you want, and then just say "Uh, sorry!"), but because we all have our civic duty to protect our environment, and if that's not reason enough, because the law enforcement agency that would levy a fine for such an action won't be interested in the least whether you were sorry or not!

Regulations are dictated by state, not fed.

Disregard any input & check with your builder / municipality & only listen to them.

100 feet over soil FC is non detectable per EPA...

& values are measured at the final destination, not the vessel’s point of discharge.
R

Big thanks to OnBalance for information he provided to me over the past few days.

As mentioned before, meeting with the PB at his office on Wednesday.

Another thing I found during research and looking back the past week at pictures/notes/texts/emails from the past few years. The PB starting filling my pool from my well the afternoon after the plaster co finished. They couldn't get tanker trucks in time, so they paused the filling process that evening and then completed it the next day via tanker trucks. I have pictures/texts that are time stamped to prove. Just so happens, the giant light colored bowl shape in my deep end is right where they stopped filling for the night.

According to the NPC startup guideline. "fill the pool to the middle of the skimmer or specified water level without interruption as rapidly as possible with clean potable water to help prevent a bowl ring.". http://www.nptpool.com/sites/nptpool.com/files/NPC_SwimmingPoolStart-UpProcedures.pdf

Yup stopping a fill is a big no no. You can actually see that in each pic. Good find.

Well, you already had your "smoking gun" photos, this other set of images is like the second barrel of the shot gun. We've seen pools that develop a very pronounced ring when the fill was stopped. Yours looks more like the cure for each section developed differently, as you'd expect it would when subjected to water a day apart.

Another glaring example of the incompetence and negligence associated with your build. I really shouldn't paint too sinister a picture of your PB. Maybe he's a decent enough guy, and has probably built many a nice pool. But obviously this one got away from him somehow... stuff happens, and now it's time to pay the piper. He'll make it right, one way or another...
R

Meeting with the PB went well. Very cordial and professional. I have a good rapport with the PB, so we spent some time just BS’ing. I went through the whole timeline, and laid out a dozen plus pictures. He claimed he didn’t realize that it had gotten that bad (although previously he said he was out last year to look at it).

He kept going into how the white deep end bowl could be fixed with an acid wash. Never was pool chemistry brought up, other than when I told him how he filled from my well one evening and didn’t fill the pool with tankers until the next day. Thus not following all new plaster guidelines. Showed him time stamped pictures to prove.

He completely agreed that the finish was unacceptable, and that he would need to talk to the plaster co to determine a course of action. I stressed multiple times that I paid for a new plaster finish, not one that would require repair or acid washing. Also stressed that nothing was to be done this year that would shorten the swimming season or leave the plaster in a compromised position over the winter.

I mentioned that I was working with a professional for their opinion of the damage (OnBalance). That seemed to show him I wasn’t playing around. I provided him a copy of OnBalance's reports and opinions (with OnBalance's prior approval). I am sure that was shared with the plaster company behind the scene.

Left the meeting in good spirits. The ball was in his court to work with the plaster company.

Found out late yesterday that they are going to re-plaster the pool early next year. Haven’t ironed out the exact details, but I do have in an email from him that they will re-plaster. He is also working with the (NE Pebbletec Rep to see what they can do in terms of an upgrade to their product. There would be a cost associated with an upgrade at a to be determined price. I can't imagine that would be a massive number, as the water, chipout, prep, re-plaster, water fill, chemistry management costs are already accounted for.

NICE! AND with written follow up!!! WELL DONE! Make sure to print that email out!! 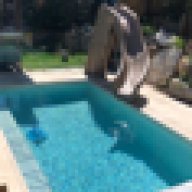 What a great outcome. So good to hear that your pb was able to discuss the situation in a professional manner.

I’m pretty sure I know this PB..

OP - it would be good for to remove name from the above post. (Got it! Kim TFP MOD)
R

Quick update. Pool was drained a few days ago. Hydro plugs were pulled. So much rain over the past few months that water is pouring in at a steady clip.

Going with PebbleTec, Tropical Breeze color. Should be done in a few weeks. I requested they wait until the beginning of May to keep from running the pump all April without being able to swim.

You can see from the pics how bad the plaster job was.

There are not enough words to express just how bad that is!!!

Chip out-will it be a FULL chip out or only around the returns, lights, and such?
R

Sorry for the delayed reply. Been traveling a bunch the past week.

Was a full chip out. Here are the updated pics. The pebble was started yesterday and finished today. Went with the tropical breeze color. Wanted something a little lighter than the old grey plaster, as we had some concerns with visibility in the deep end during daylight and nighttime.

Fill water was just added. Took about 4.5 tankers plus about 3 hours off my hose (well water) at the start.

PB will be managing startup over the next few weeks.

I will try getting more pics once I get home.