Found the site a bit late, but I guess I am still in the "under construction" phase as the pool just started filling today and they come out to form the deck and patio for the concrete pour in a couple of days.

We broke ground July 13th and it has been a bit of a ride. The pool was formed a couple of days later on the 15th and sat for over a month. During the month the rain filled in part of it for us, then they came back out and re-formed the parts that collapsed.

Rebar and plumbing was done on August 19-20 and they came out to shoot the pool on the 26th. They got started and after numerous issues with clogging hoses and the mix being wrong, they left after shooting about a third of the pool. They came back on the 31st and finished the job.

The PB brought the equipment out on September 17th, which is the topic of another thread over in the Pumps, Filters, and Plumbing forum, and did the finish plumbing and got the lights installed. Long story short, contract said Pentair but we got First Choice pool equipment.

Yesterday, 20 September, they came out and prepped the pool for plaster and came out today and finished the plaster job in about 4 hours. The results, I think, are amazing and the crew did a great job. As they were finishing up the electricians showed up to run the power and connect the equipment.

The pool is a 15X30 Roman style 3.5 to 6.5 ft. deep. 1 skimmer and 2 drains with 4 returns. Nothing fancy, just a simple, functional pool to enjoy during these Texas summers.

We went with the marble dust plaster in turquoise with the meridian 6in tiles and 2in meridian accent tiles along the stairs and swim out. We have travertine coping and will have a 6ft concrete deck all the way around tying into a 15X26 patio from the house to the pool.

Looks great, glad you got through it all!

Been a interesting week...Had a leak at the pump that ran all night and led to a partial collapse of the backfill. Got that fixed and refilled the pool and got the lights working. Still can't get them to work with the Bluetooth, but I think that is operator error.

Also, the concrete folks started framing out the deck and hopefully, depending on weather, will get it poured this week.

That's a very small filter, and was your original chosen pump a higher hp? Did the PB ask you if he could change your chosen brands to this one? 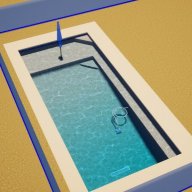 Love the pic with the colored light! Are the four lights the same size (wattage)?
T

There was an interesting situation with the equipment that ended in a bit of a bait and switch due to inattentiveness on my part.

The PB and I discussed Pentair products pre contract but never specifics. When the contract was written it literally said "Pentair skimmer, vs pump, filter, lights, etc. leading me to believe that all Pentair gear...well, I have a Pentair skimmer. The rest is "First Choice" and I have a thread about it over in the equipment forum if you want the details. I'm a little put out by the way it went down, but my fault for not asking for specifics on manufacturer, model numbers, and sizes and getting caught up in the excitement of finally pulling the trigger on the pool. Hopefully someone will see this and learn from my mistake!

I was a bit concerned about the pump size myself, but it seems to be doing a fine job turning the pool over and it is super quiet. Granted, my comparison comes from a 10 year old Pentair single speed, but wow.

As for the lights, all the same lights, First choice, that have a bunch of settings, colors, and light shows. Thy look a bit off in the picture as the pool was just filled and seriously cloudy when it was taken. I'll have to take another now that it is clearing up.

They are run by a XG controller which works great except I can't seem to get the Bluetooth to connect. Hopefully I will get that figured out as they are really something.

Your 1.4 HP pump should be fine, I think Maddie was commenting on the filter itself (100 sq ft). But hey, I got the same single cart when mine was installed (Hayward C-1200). As long as you keep the water balanced and TFP clean it will do fine. You will have to rinse the cart every 2 - 3 weeks or so depending on wind in your area, but a single cart is fairly easy to pull out and spray off. I'm over on the Marion side out in the country and the wind does a number with dust and evaporation. Keep your TF-100 or Taylor K-2006C test kit nearby and be sure to add which one you have to your signature. Use the PoolMath APP as well.
Reactions: TXBob
T

The 100 sqft cartridge is pretty small. I have discussed it with the PB and he said to give it a try but he would swap it out for a larger one if I didn't like it. With that, I'm willing to give it a try.

We definitely have the wind over here. We are south east of San Antonio in La Vernia and have a ton of sand in the yard. As a matter of fact right now the pool has a nice sandy bottom. Brushing and daily, for the new plaster as well, and cleaning the cartridge every couple of days. I am pretty sure that is due to the yard being torn up for the deck and patio so hopefully once that is settled I can get it under control.

Still need to upgrade the test kit. I have been using a K1001 or equivalent since I can remember, but I guess it might be time to upgrade! Reading all the articles has really been interesting and a wonderful resource of what is out there now.

Bob
You must log in or register to reply here.
Thread Status
Hello , This is an inactive thread. Any new postings here are unlikely to be seen or responded to by other members. You will get much more visibility by Starting A New Thread