I've never had a pool before. now I have a little over 18k gallon pool and it's a fresh fill. Running Pentair intelliflo and intellichlor and my pool hasn't had any chemicals added except salt yesterday. I put 400# of salt in and my screen logic numbers are confusing me this morning.
I don't know what other details you all might need so please go easy on me. 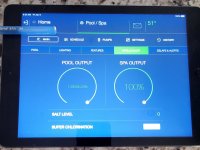 As you added salt just yesterday it is not advisable to run the SWCG yet.

The screen shows 0 for Salt Level so it appears the chlorinator is offline for some reason.

Go to the equipment pad and see what the lights on the chlorinator show.

mknauss said:
Go to the equipment pad and see what the lights on the chlorinator show.
Click to expand...

Are you sure the salt is well mixed into the pool. what is the salinity from your tests? and I think the first thing I would do is power cycle the beast.
N

Fiveflat said:
then there is a row of green lights along the bottom and I can't remember what those represent
Click to expand...

Production runtime. 20/40/60/80/100 %. Sounds like it’s producing chlorine. It’s best to leave it off for at least a day while it mixes like Marty said. Too high of a content can damage the unit if some salt sludge makes it through.

Newdude said:
Too high of a content can damage the unit if some salt sludge makes it through.
Click to expand...

It is a good practice but the IntelliChlor is not as susceptible to damage due to high salt levels as other brands.

The OP added salt yesterday. By now he is good to run the SWG.
Reactions: Newdude

From what I was told that Intellichlor should just stay on all the time and it will generate as needed. I don't even know how to turn it off if I needed to. It switches on and off with the intelliflo pump

Fiveflat said:
From what I was told that Intellichlor should just stay on all the time and it will generate as needed. I don't even know how to turn it off if I needed to. It switches on and off with the intelliflo pump
Click to expand...

Turn the IntelliChlor down to 0% to turn it off.
Reactions: Fiveflat

Obviously that is a bogus number.. The first thing I would want to know is... Is the IntelliChlor connected to the com port in the EasyTouch??

When you adjust the % button does the % of output actually change on the cell itself???

Jim, I think you are spot on here! I gave some details about this in the "introduce yourself" forum but my pool start up guy really dropped the Ball on me. My Intelliflo pump wires were broken underneath the pump display and I had to fix those to get the easy touch to communicate with that. I will bet The Intellichlor is something similar! I should have figured.

Interesting thing to note though, I never saw those crazy numbers until I added the salt yesterday and looked at it this morning.
Reactions: Casey

Must just be a coincidence, as the % of output settings, really have nothing to do with the salt level.

Well something odd about my iPad vs my cell phone. But suddenly my iPad is even reading it correctly this evening. Salt level is 3450 and it's showing 75% pool and 3% spa.
So do I have to manually lower the intellichlor to keep proper chlorine levels or does the intellichlor make adjustments on it's own?

Hi Five (I crack myself up sometimes)
You will have to adjust your SWG chlorine output manually. That is why you test for your Chlorine levels and turn up or down the output on your SWG to match this chart:
FC/CYA Chart
Remember to stay on the high side of the target, not the minimum. But, I really can't tell you what FC you should be at without knowing your CYA level. And I don't think the Poolmaster kit has a CYA test ( I googled it to be sure). Did you say you were going to order a TFTestKit? I forget.. I think you mentioned it your other thread.
Reactions: Fiveflat

Correct, the poolmaster doesn't test for CYA. I will be ordering a TFTestKit eventually. I got home last last night and tested it - I was all excited like Jojo the circus clown after learning so much yesterday haha!

Well you need to get a CYA test sooner than later. Here's why. You said your FC is at 2, if your CYA is in the range for a SWG per the FC/CYA Chart then your FC is too low, you should be closer to 5 or higher. But I'm just guessing here, since I only know half the story. CYA protects your chlorine from UV degradation. So if your CYA is too low, your FC will be burned off faster due to the sun, and your SWG won't be able to keep up. If your CYA is too high then you need more FC to compensate.. and you reach a point of diminishing return where you can't keep enough FC in the water to sanitize the pool. And again your SWG won't be able to keep up. CYA degrades very slowly and if you have too much then the only recourse is to drain and refill to get the CYA back in range.

You will not find this information at most pool stores or from most pool guys. They are usually operating on pool standards left over from the 80's, back when mullet hair doo's were the rage. The relationship between the CYA and FC is a relatively new concept and is what the TFP protocol is based on (if you are a science geek, that information is posted in the bowels of the forum as well). That and doing your own testing so you know what goes in your pool and what each chem does. So without a full test kit, you are only seeing a part of the story and are doomed to an eventual green pool.
Last edited: Apr 10, 2021

FYI if you hang out in Lodi much I'm sure you know that mullets are all the rage again amongst young country boys...

But okay okay - I'll order that TFtestkit asap! I'll say though man my pool is looking fantastic now after finally adding the salt and making a little Chlorine! I'm a tech geek country boy myself and not so much a chemistry geek but I'm learning!
Reactions: Newdude

Fiveflat said:
I'm a tech geek country boy myself and not so much a chemistry geek
Click to expand...

I had to go to summer school twice just so I could graduate High School on time... I don't even know how to spell Khemistry, and I can do it..

Fiveflat said:
FYI if you hang out in Lodi much I'm sure you know that mullets are all the rage again amongst young country boys...
Click to expand...

Reactions: Newdude
You must log in or register to reply here.
Thread Status
Hello , This is an inactive thread. Any new postings here are unlikely to be seen or responded to by other members. You will get much more visibility by Starting A New Thread