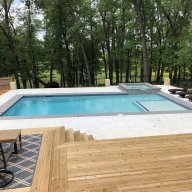 I’ve seen dull pale streaks on my plaster for a while now. (See pic) Any ideas what this could be?
If it helps...When first constructed the pool plaster went without being filled for several days. (don’t ask).
here are current water readings.
I plan on increasing FC and TA today.
FC-2.2
CC-0
CH-140
CYA-40
TA-50
PH-7.4

My pool builder had to cut into the plaster to add some tile to our steps and sun shelf. Now after several months it seems the grout or cement mixture around the tile they used is yellowing. Any ideas how I can fix?

The dull pale stains could be metal stains but more likely deficiencies in the original plaster (mottling?). How old is the pool?

The pool is 1 year old

@onBalance Do you think they used the wrong cement or <whatever> to install these tiles in the steps? This was an after the initial plastering alteration. The coloration of the entire plaster also seems to be another problem.

First pic, That is typical plaster modeling that occurs in all plaster. Yes, some more than others. Some causes are, but not limited to, Available water used to mix the material with. That is the single biggest variable that can affect the severity of modeling in plaster. And the start up procedure after initial plaster. That would be chemical balancing, as well as brushing. If neither of the previous two are addressed, with almost OCD like attention, you are asking for more severe modeling. However, some severe modeling can occur with out reason no matter how much attention you give to the startup.

2nd pic, That doesn't look like tile grout. Maybe its just the picture, but that almost looks like that was poured in or molded, maybe an epoxy? Its probably just the distortion of the water in the pic...

The other two pictures, i cant tell. But it doesn't look like plaster either. My guess would be "bag grout" When i set, or make tile repairs, i always use Portland white cement and white (quartz) sand, the two components of basic white plaster. If your PB used bag tile grout, while it is the correct material, you never know what is really in the bag with relation to color, or quality. Meaning fading or discoloring over time. That's why tile setting after the fact can be tricky to get right, color wise.
When doing tile repairs, it is always best to grout with the same material that the pool was plastered with if at all possible, including the same tap water. Water brought in can have different modeling effects than the original plaster that was more than likely mixed with the available city or well water at the pool site. You may not think thin grout lines would be that noticeable, but as you can see from the pics, they do contrast quite a bit when a color change occurs.

As far as the yellowing stains, not sure. Maybe something that happened when the pool was drained for the tile work. The only fix would either be to drain and VERY light acid wash the area to see if it comes back (not recommended unless the guy really knows what he is doing). And also, part of knowing what he is doing would also be for him to include that there would be "no guarantee that the yellowing/staining would not come back".

Other option would be to chip out and redo.

This plaster has severe mottling, and is not typical with good plaster jobs. The varied discoloration is caused by the combination of late hard troweling, wet troweling, and adding too much calcium chloride (hardening accelerator). That type of discoloration is not caused by an improper startup procedure or type of water used with mixing. Note the non-discolored area in the bottom half of first picture and third picture.

As to the slightly discolored "grout" around the replacement tiles, it appears that they used epoxy (as mentioned by Pool Clown above) instead of typical white Portland cement as was used in the entire pool.
You must log in or register to reply here.
Share:
Facebook Reddit Pinterest Tumblr WhatsApp Email Link

F
Max-E-Therm heater cycling on & off and I'm out of ideas.

Wednesday at 7:17 AM
duraleigh