Pavers - TBD, first choice StepStone
Coping - our option (will probably go with StepStone coping)
Tile - TBD (opinion changes daily - we really like the fish scale patterns but options are limited for a pool safe tile in that pattern)

Lose the Ozone and Nature2- Ozone is wimpy and worthless, Nature2 uses metals in that *expensive to replace* cartridge which can cause metal stains to your pool surface. No bueno!

Insist on the SWG or at least tell them you'll dose with liquid and please plumb the pipe with extra space in it after the filter for a future SWG which you can add at a later date (not terribly hard to do yourself).

Day 1 - start of demo and dig.
Day 1 problem - our posts supporting our patio are totally rot. We knew they were bad, but not this bad.

I am with Maddie-lose the uv and ozone thing. Go SWG.

I have a sad for your wallet with that post

I know the vast majority on this board favor the SWG as much as they hate the UV/OZone/Mineral system (and for good reasons). It's something I'll definitely consider replacing later and certainly wasn't my first choice of equipment. The backstory is I went with the builder I liked the best and unfortunately he basically told me he wouldn't install a SWG due to problems he's seen w/his customers. (He said he'll install a SWG if I signed a disclaimer releasing him of liability - effectively voiding any warranty.) Whether or not I agree with him, I certainly respect that he will only sell what he can stand behind - he's thinking long term instead of just focusing on the sale. My other shortlisted builder recommended chlorine but was willing to go with a SWG, and would go with a Pentair equipment which I actually preferred (really just because I hate how Jandy builders all use the Nature2 mineral setups now). But after inspecting the workmanship of some of their pools, I decided against going with them.

Day 2 of the dig went well. One of the two dump trucks they rotate in and out broke in front of our house by they were able to get it running again. Aside from that, nothing eventful, which is good news. I was surprised that our soil below 2-3 feet was fine sand, like something you'd find at a beach.

I understand and support your decision to not push the SWG with this builder. What you can do is say no thank you to the UV/mineral set up. Just leave that part out all of the way. Save you a bit of money for later.

That is a fine looking dig so far. Do they think they are done yet?

They said they'll finish by tomorrow. They need to do a little bit more digging and then build a ramp to get the Bobcat out. They were a hard working crew - 3 people running back and forth with wheelbarrows hauling the dirt and two Bobcat operators - one in the back digging and another in the front taking the soil and loading it on the dump trucks.

Is that sand moist? Is that why it is holding the shape? That is wild to look at and see such a difference in kind and color of the dirts!

Run out there this morning with the plans and tape measure. Is it wide, deep, long, etc enough? NOW is the time to fix or tweak as needed.

kimkats said:
Is that sand moist? Is that why it is holding the shape? That is wild to look at and see such a difference in kind and color of the dirts!
Click to expand...

The sand is perhaps slightly most, but not much. This surprised us as well. The PB mentioned he wished he had the storage for this, because typically he needs to pay for sand like this. He mentioned he ended up giving it to a golf course instead of dumping it - something like 14 loads worth.

Plumbing went in the last two days. Honestly I don't really know what I'm looking at regarding plumbing. Steel and patio repair is supposed to be done next week and assuming there are no surprises with the inspection, shotcrete the following Monday.

I think I see a pressure gauge on top of one of them. It should read about 30 or so. It shows if your pipes are holding pressure.

I don't care for the red valves They are prone to breakage over time. See if he is willing to up grade them to jandy valves or such. Do a google search for "reabuildable" valves and see what you think.

Thanks KimKats for the feedback!

It looks like the main line where the majority or the larger pipes run too are on a pressure valve currently set to 40 PSI. (It was kind of hidden in the other photos.)

The red valves are made by Jandy, are you referring to their Never Lube valves? I didn't see any in that series for 3/4". I've always liked the brass ball valves - but transitioning back and forth from PVC to Pipe could be a hassle. (I googled for rebuildable valves the majority of the those seemed like the larger type pipes.

If they are Jandy then them me be good to go! Holding 40? OH YEAH! That is good!

Day 1 of Steel and replacing the footings and rotted posts on the patio.

Tile (Elysium Dragon Scale Grey) for the RBB arrived today. The remaining tile (Cepac Continental COS-5) and coping/pavers (Stepstone) are still on order. The longest expected lead time is for the coping/pavers, but we're in no rush for that step given we'd prefer to give the shotcrete time to cure.

Be sure to double check the pool beam elevation and have a clear plan of where the patio will pitch and any drains needed, to include piping for roof drainage if necessary.

Also ensure they are properly compacting any ramp sections or trenches. Running over loosely placed fill with a bobcat tire is not proper compaction.
Reactions: rnakawat 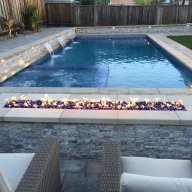 You will be able to swap out the Fusion Mineral with the Fusion Soft and it will be a direct replacement without any plumbing modifications. You can just omit the mineral cartridge and only run the SWG. This is what I did on my set up when my PB put in the Fusion Mineral system.

OGSW20 said:
You will be able to swap out the Fusion Mineral with the Fusion Soft and it will be a direct replacement without any plumbing modifications. You can just omit the mineral cartridge and only run the SWG. This is what I did on my set up when my PB put in the Fusion Mineral system.
Click to expand...

I was considering that down the road... once I'm comfortable that there are no issues with the pool that may require my PB to come out and repair. Was that something you did yourself or did you hire someone else to do the swap for you? I thought I saw posted somewhere else that the pipe layout was slightly different.

Steel is done as is the patio posts. The first inspection is tomorrow. The contract called for 4 #4 bars in the bond beam, which I need to take a closer look on (it's hard for me to distinguish #4's and #3's).

Problem #2 - I looked carefully at the drain pipe and unfortunately I have roots in the pipe. (And that portion of the pipe wasn't part of the contract.) I knew I had a slow drain there, so it wasn't that big of a surprise. The pipe runs under a raised planter bed, but it's nearly impossible to get to due to the limited real estate and having the mounds of excess dirt (actually sand) from my trenches for the pool pipes. More $$$.

rnakawat said:
I was considering that down the road... once I'm comfortable that there are no issues with the pool that may require my PB to come out and repair. Was that something you did yourself or did you hire someone else to do the swap for you? I thought I saw posted somewhere else that the pipe layout was slightly different.
Click to expand...

It’s a direct replacement. No modification needed. The only thing that was added and recommended by the manufacturer is adding a check valve after my heater and before the SWG. I did the swap myself but the PB wired it up to the control panel. This change was done before my build was finished, so he finished the install.
Reactions: rnakawat

rnakawat said:
Problem #2 - I looked carefully at the drain pipe and unfortunately I have roots in the pipe.
Click to expand...

What is that drain pipe for?
Do you know where it went?
It looks like pvc so the most likely reason there would be roots in it is it is perforated without stone or fabric around it.
You must log in or register to reply here.
Share:
Facebook Reddit Pinterest Tumblr WhatsApp Email Link

Sep 23, 2019
pianogineer
P
F
New construction in California - Returns at the bottom of the pool