Need tips for liner repair. Can I DIY this?

Jump to latest Follow Reply
You are using an out of date browser. It may not display this or other websites correctly.
You should upgrade or use an alternative browser.
B

Bought a house with a vinyl liner pool in October, had the liner replaced in the spring, the liner installer messed up and there are 6 small tears in it, and I can't get him to fix it because he died of double pneumonia right after installing it.

Losing about 300 gal per day out of the pool. I tried dye tracing and couldn't find the leak, hired a leak detection company, they came out with a snorkel and found the leaks. There are three tears just below the light fixture ring, each tear below a screw right at the edge of the fixture, and three tears just below the batten (or whatever you call it) that seals the liner to the steps, also right at the edge just beneath the screws. I'm almost positive I know what happened. The liner guy was trying to train a new tech during my install, and the tech was the one who made the cut outs instead of the main guy because the guy was working with pneumonia (and shouldn't have been, quite honestly). The tech was stoned and got fired later that day while I was watching. I'm near positive that the tech probably stepped funny on the liner during the install and pulled the liner away from these locations with his foot, tearing the liner under the fixtures.

So I'm probably going to have to DIY this somehow, because the company is now defunct because the guy passed away. Is this fixable, or do I have to get an entire new liner installed? If fixable, how? Can you patch something that close to the fixtures? I'm thinking about DIYing a simple patch for now with this stuff:

Is that a good idea or will it mess something up longer term?

I checked out the tears myself today after they found them, and the three ones under the light are about the size of a quarter, while the ones under the steps are much smaller.

The leak detection company said not to do it, but that another liner install company may be able to come out and pull the fixtures off, stretch the existing liner up past the tear, and reattach the fixtures and trim around it. Does that sound reasonable and/or possible and if so what would it likely cost?
Last edited: Jun 24, 2021

Can you get some pics?
Let me see if i can call in somebody to help…….

I can't unfortunately, don't have a waterproof camera. Each of the tears is about the size of a dime and they're right up against the fixtures.
J

If you have the stair cutout piece you can cut a support strip amd glue it on. Then reattach. Same for the stairs. It's the only safe way. Stretching it isnt that easy but may be possible on a hot day for experienced installers. Sucks this liner is new. Losing the water sucks too if your not on city water 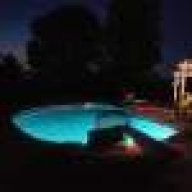 I'm zero help but sorry you're going through this and hope it all works out.
You must log in or register to reply here.
Thread Status
Hello , This is an inactive thread. Any new postings here are unlikely to be seen or responded to by other members. You will get much more visibility by Starting A New Thread

Everything Else May 24, 2022
Pool_Medic
P
D
My Pool is leaking: And Leaking Fast!! Please Help

Everything Else Jun 10, 2022
milesvdustin
M
A
Vinyl liner is pulling away from step area

Everything Else Apr 26, 2022
adunn8
A
J
Vinyl Liner Replacement