Need help - is this a small leak or condensation

Jump to latest Follow Reply
You are using an out of date browser. It may not display this or other websites correctly.
You should upgrade or use an alternative browser.
W

Hi TFP. I am at a loss with what could be a leak in our new build. The builder is convinced it is pipe sweat. I'm ready to accept any conclusion just want it done right. There's a small drip at the top of the elbow on one pipe. Originally all pipes were charged to 25 PSI, and the gauge stopped moving around 19 PSI, took about 1 week. Recently we recharged pipes to 35 PSI.

There is not an immediate drop in pressure so one would think no leak. It takes days to lose a significant amount of pressure. It's about .5 to 1 psi lost per day it never goes back up. So originally we (me and builder) were convinced can't be a leak. However there are a few things on my mind that makes me not relax.

Questions running through my head:
* How could this be sweat? Do pipes sweat for days under pressure?
* If it is sweat why not condesation anywhere along the pipe only at the elbow?
* We are about to slap a deck next to this pipe I don't want to be thinking there is a leak in there why we try to relax and play in the pool.

The builder is convinced it is pipe sweat dripping there. I am confused only because there is no water to the left of the elbow. The drip or wetness is only below the elbow.


They offered to get leak detector out today but of course I've been swamped and couldn't make the appointment. Detector reporting no leak, or undetectable leak. A report is coming for me to review. I believe the leak detector isolated just this pipe which appears to only be going to the water feature. However during leak detection it doesn't appear they capped the feature side as now it's all hooked up. This feels shady to me to wait until there is no cap on the other side of the pipe, just the feature now, so no real way to pressurize the pipe IMO. I've been asking the builder to invesigate this for over 1 month and he waited until the feature was installed.

At the end of the day I want to know what this could be, if it is a leak or not. There will be a deck against this pipe and we'll never see it again. Thanks for any feedback or anything that can ease my anxiety about having a leak! 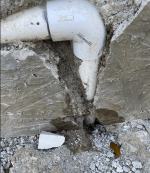 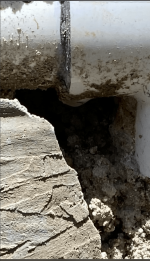 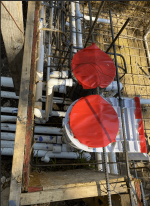 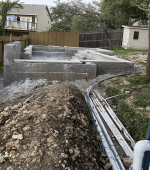 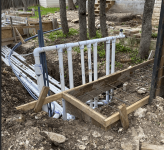 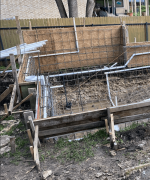 If the pressure only goes down there is a leak in the plumbing... it sounds like a very small leak as when the pressure gets to 19 pounds it stays there... I would use plast-aid over that pipe and make sure there is never a leak again.. I did the same on a pipe 8 years ago and it still is not leaking

Thanks. I just feel wronged by it all. There was a leak when everything was capped. They waited for the water feature to be put on before having the leak detector come out and was like hey look ya no leak.

I guess that is a consellation? With water running through pipe to water feature there is less of a leak now? idk.
You must log in or register to reply here.
Thread Status
Hello , This is an inactive thread. Any new postings here are unlikely to be seen or responded to by other members. You will get much more visibility by Starting A New Thread