Any help in figuring out the issue with my in-ground spa would be greatly appreciated. Our problem is that when we run both the water pump and the blower pump, the air stops and the blower faults out. I’ll describe in more detail below.

We have two pumps and two blowers for the spa jets (separate pump for the filter/heater). A lower set with 4 jets and and upper set with 8 jets. I have listed the equipment below. The blowers were both replaced about a year ago. Everything ran fine for the first two years. The problem seems to have begun when we replaced the upper blower (with Jandy’s new line of pumps) and/or maybe was the cause of the old blower dying.

Some facts about when it does it and what we have tried….

- This situation only occurs on the upper set (8 jets). I switched the air blowers to see if it was strictly a blower issue and the problem continued on the upper lines.

- If you run the blower without the water pump, air seems to blow out the jets well, no faults occur.

- If you are running the blower alone and turn on the water pump, the air stops and the air pump faults out shortly after.

- If you are running the water pump alone and turn on the air, some air comes out for a very short moment and then the air stops and faults.

- If you remove the 8 jet bodies completely the water pump and blower seem to run without issue. Obviously this seems to point to some kind of restriction.

- The problem also seemed to start after we had a leak company do some testing to insure no lines were leaking (separate issue). May be coincidence, but the first blower failed around the time they were here and again, the issue appeared when we put on the new blower. Could they have done something or left something when they were pressure testing??

- If there’s just too much restriction for this distance, etc, why are we not seeing an issue on the lower set of jets, especially since there are only 4 or them vs. 8 up top?

- I don’t think something underground collapsed, but obviously possible. The upper and lower lines run side by side. They were covered in gravel. About half the line is under a slab and the other half under a yard and we have not seen any settling or changes. No landscaping, etc. has been done that would have changed anything (again, it worked fine for about two years).

- Could the old style Jandy blower have had more oomph and thus we did not see this issue? Both were 2.0 hp and seem to be similar specs.

I am attaching diagrams of the water lines and blower lines as well as a picture of the spa plumbing.

Please let me know your thoughts on this issue. 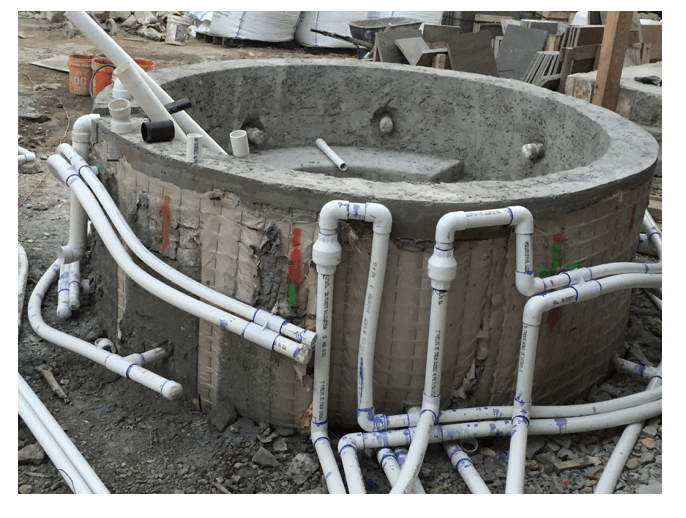 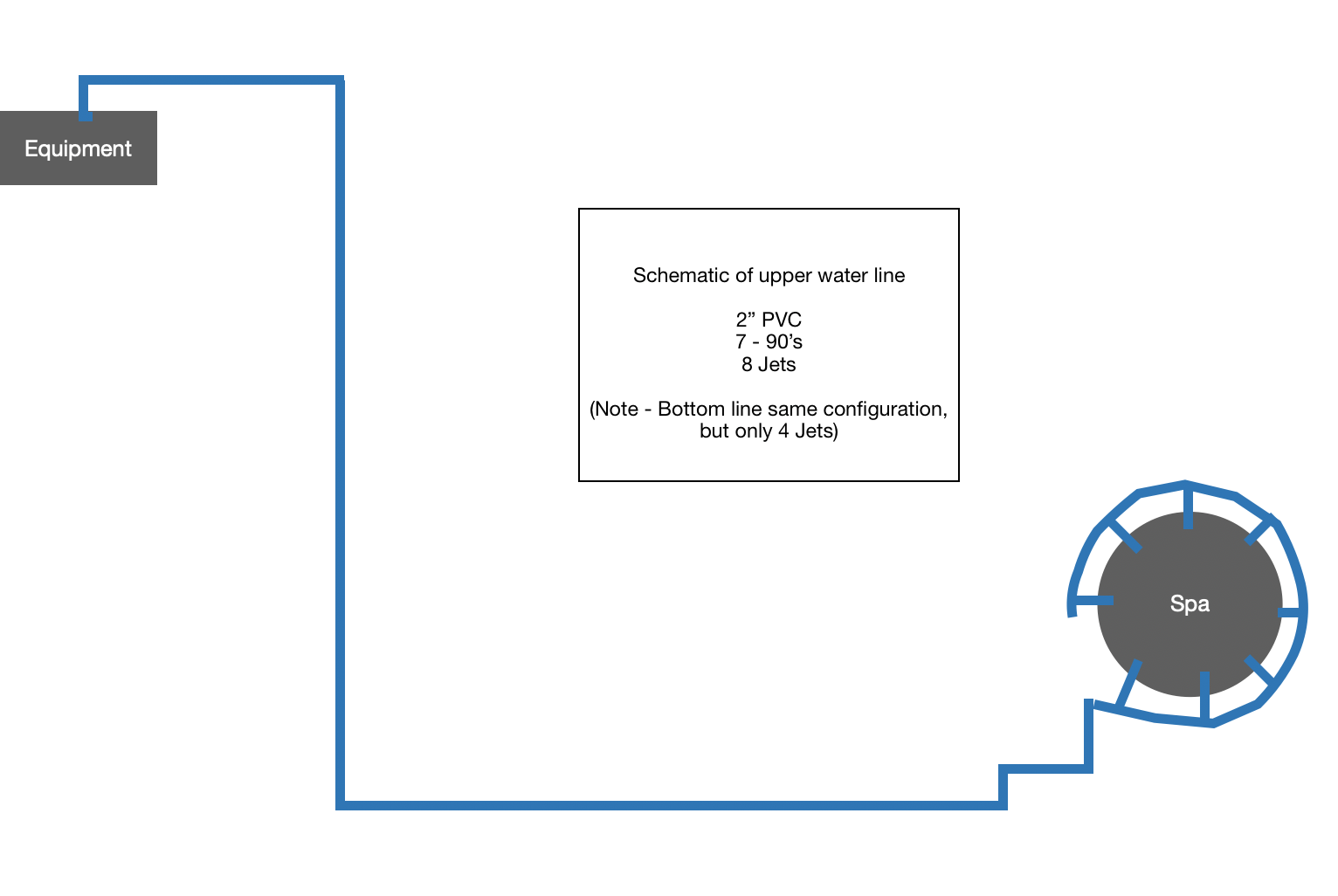 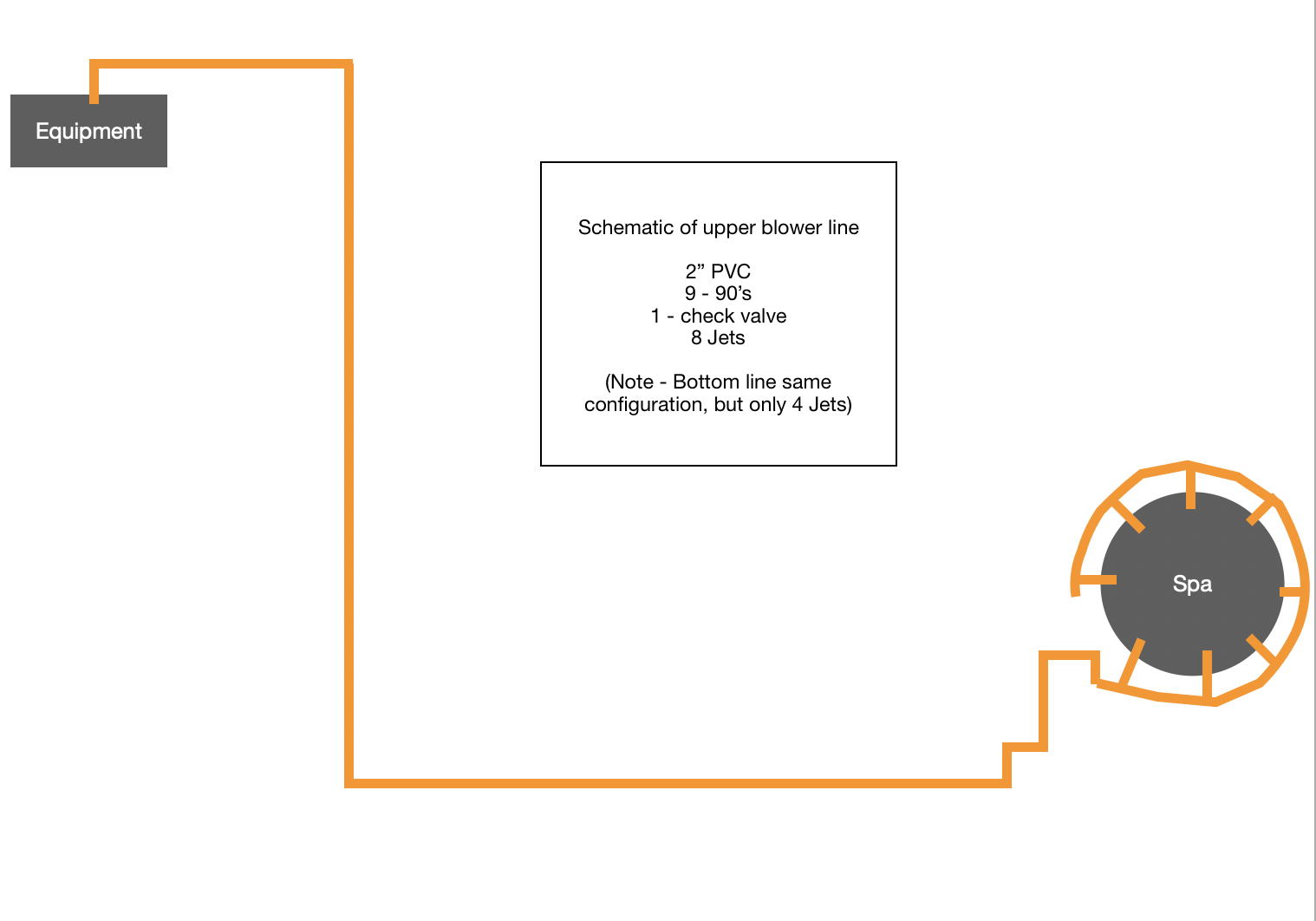 One possibility, there is an obstruction in the water line jets and only shows up when there is water pressure at the tee. You need to remove the jet nozzle located in the venturi tee with a long socket wrench and flush the lines.

Another possibility is that the check valve on the air line has failed. Those types of check valves do not have a very long life. One of the downsides of putting a Hartford loop at the spa is that you cannot replace the check valves easily.
You must log in or register to reply here.
Share:
Facebook Reddit Pinterest Tumblr WhatsApp Email Link

heater blower fan on all the time (uncommanded)