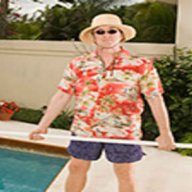 I posted in May about problems with my Dolphin Active 30i after about 5 years, and seven month liffe of my "returned" and resold (to me) Doheny's Mercury. I decided to purchase a less expensive model this time, I chose the Advantage (similar to E20 or Nautilus CC).

Advantages (pun intended):
1. It was $320 less than the next model up, the Advantage Ultra.
2. It seems to clean faster (move faster around the pool) than my previous two Dolphins.
3. It's slightly lighter weight.
4. It has a shorter (50') cord, but it reaches all corners of my pool. It seems to work better when I started the Advantage mid-point on the long side of the pool. I haven't noticed the cord tangling so far. (Even my one swivel cord did not work well, it tangeled like my non-swivel cord.

DisAdvantages:
1. It doesn't use the most common filter basket. The filter basket on the Advantage looks the same, but is slightly smaller. There goes my plan of re-using the two complete sets of fine and extra-fine filters from my first two Dolphins. (The extra fine filter had just been replaced, so was like new.). And the second extra fine is still in the packaging. Looks like I'm going to have to buy the smaller extra fine filters.
2. It doesn't exactly do waterline cleaning. Sometimes it will scrub a bit at the surface, but it's a lot less than my previous (and more expensive) Dolphins did.
3. It doesn't have a real handle to lift it out of the water. It has a built in place to grab in the body, which works fine, but I like the more secure real handle.

Other Comments
1. Advantage has only one brush (on the front). The more expensive models have two brushes. But it appears to me that only the front brush does the scrubbing, as the front brush runs at 2X speed. The rear brush just runs along at the same speed as the tracks and doesn't appear to do a lot of scrubbing.
2. I don't think there is a flashing blue light when it's operating in the pool.
3. As I mentioned above, that basket for this unit is just a little bit smaller. And instead of the black fabric at the robot intake there is a plastic box, with a spring lid.
Last edited: Tuesday at 10:28 AM

Do you think you could sew a tuck or two in the filters to make the fit and stay on the new ones?

kimkats said:
Do you think you could sew a tuck or two in the filters to make the fit and stay on the new ones?
Click to expand...

Thanks for your thought. Each of the robots has four basket filters. The four filters are fixed size with plastric surrounding the filter membrane. My older Dolphins have slightly larger basket, first impressions they were not interchangeable wiht the smaller basket. But perhaps the four filters are the same, and the baskets are different. The whole thing is a bit crazy to me. I will check and report back. Thanks.

EDIT: Measured the #1 filter in each basket. My older, more expensive Dolphins have bigger filters, #1 is approximately 8 1/2" x 6 3/4". The new Dolphin Advantage (less expensive) has smaller #1 filter, about
7 1/2" x 5 1/2". Maybe I can sell the new ones, and even almost new ones. (Picture of four filters attached, these happen to be replacements for the bigger basket.).

It does not look like it cleans the tile line. I say this as the unit has no vents that blow water sideways to move the robot along the tile line.

Thanks for the review,

It does not look like it cleans the tile line. I say this as the unit has no vents that blow water sideways to move the robot along the tile line.

Thanks for the review,

Not pool schooled on Dolphin diagnosis or fix

S
Pentair Warrior SE is tangling and eating my cord.