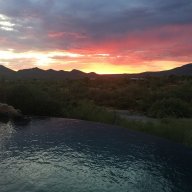 I am at a loss... I am fairly handy but pool equipment is certainly not a strength. My pool repair company is not responding and I use the spa daily - so I am trying to get the heater to run in their absence. Parts may be an adventure this close to year-end but I have to get thru the first problem first...

My MasterTemp heater decided to start playing games the other morning. The spa was heating up to 101 from the low 60's and it stopped heating at 93. I tried to turn off the heater but the iAqualink said that it was in cool-down mode (it wasn't) so I had to turn it off by putting it in Service Mode and then cycling it to Automatic.

I tried to re-start the process but the heater would not turn on. I did not see any error messages. The Heat LED does come on as well as the Set Temp display.

I tried again later in the day... it heated the spa up from the 80s and again stopped at 93.

I thought the 93 was a odd place to stop consistently so I upped the heat limit to 104 and re-started it (by putting it in Service Mode and taking it back to Automatic). This time it heated to 96 degrees - so the limit went up 3 degrees and the heater stopped 3 degrees higher.

I am really not comfortable getting into the bowels of this thing (gas goes boom) but I can/will swap out parts. My thinking is that it is not a pressure issue as it hits the same temp each time, not the high limit switch for the same reason (plus adding 3 degrees to the limit resulted in the water being 3 degrees warmer). My guessing leads to the thermistor or the circuit board is causing the heater to see a higher than real temperature.

Thoughts and better reasoning than I have laid out would be appreciated!
-J

First check the thermisitor using a multimeter and a 10K resistor.

The temperature sensor is a 10K thermistor. You can measure its resistance with a multimeter. 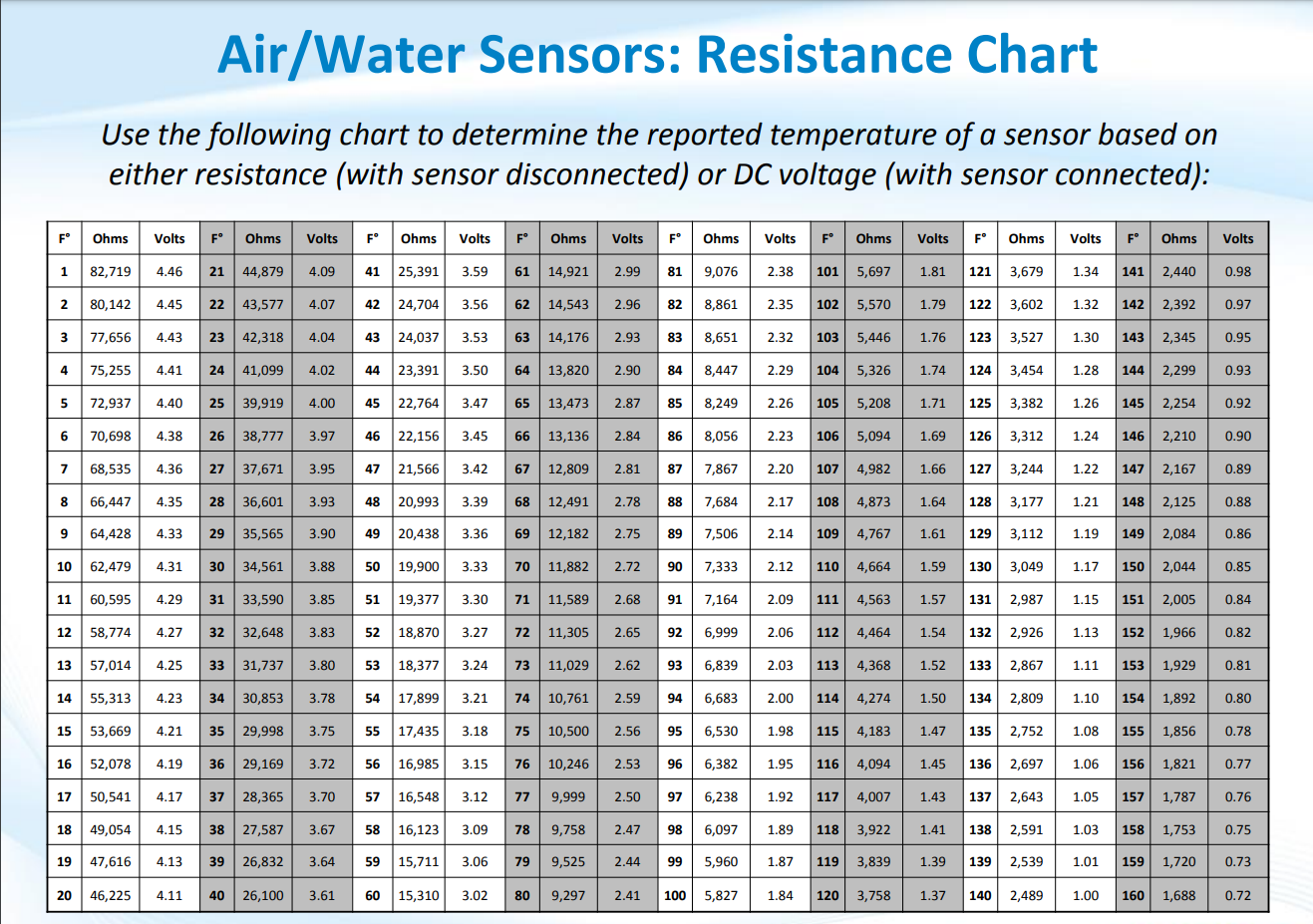 If the temperature stays at 76F while the Aqualink heats the water to 101 then you have a problem with the thermistor.

If the heater still will not heat to 101 then you need to check the thermal regulator or the bypass valve in the header. 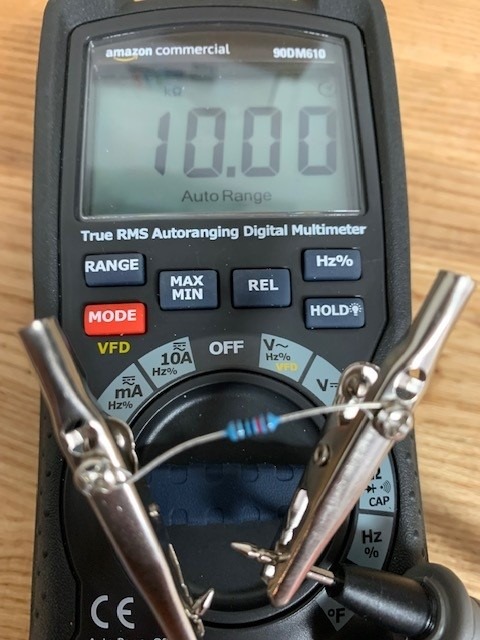 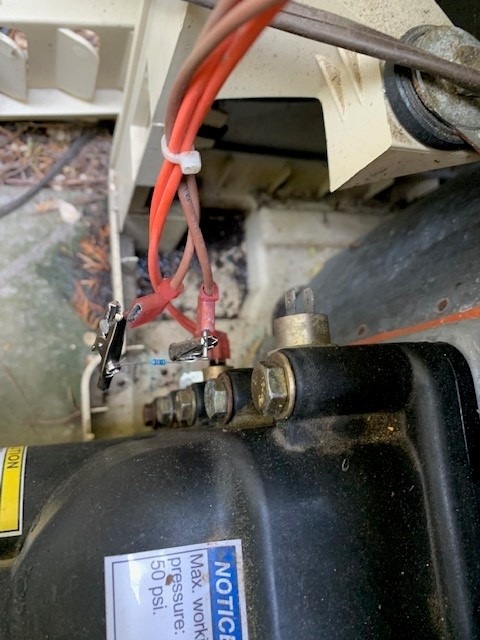 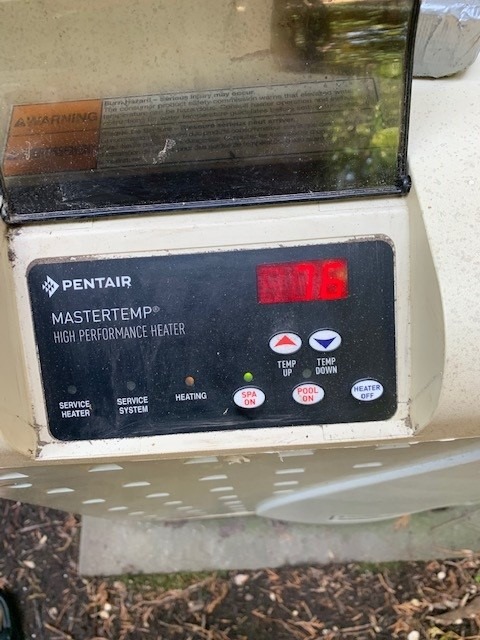 @ajw22 -
You were right - thermistor was the problem. Replaced old and the heater worked! Interestingly, the old thermistor had been replaced (5+ years ago) and visually was in good shape. Learned my lesson (again) - don't rely on how old something is or how it looks!

Update... unfortunately. The new thermistor apparently wasn't the problem - or the full problem - as I once again have a discrepancy between the reported temp on the heater and the AquaLink. @ajw22 mentioned next the thermal regulator. Being the weekend and no local pool supply houses having it, I ordered one online for delivery the next week. I also ordered a High Level switch, both Pentair - at least that is what the ad said.

While I was waiting for replacements, I took out the thermal regulator. It was a little corroded and did not open when exposed to hot water. I cleaned it up and got it to open/close and put it back in. For the next two days it worked so I thought I was on the right path - then failure. Since the new thermal regulator came in the that day I was still hopeful. Denied. The situation did not change. I put the new High Level sensor in... again, no change. Visually I can see the bypass and it appears intact - no bumping or banging has been noted.

I should mention that I can "coax" it to work... sort of. I heat it to where it stops - 97degrees per the AquaLink (105 per the Mastertemp). I turn off the heater (AquaLink says that it is heating but the unit is off) and let it cool somewhat. Then I turn the set point to 96 or so, turn the heater on, then raise the temp on the AquaLink to 104 - (don't worry, it won't get that high). Sometimes - when it has cooled sufficiently - I turn the system to "Pool" and letting it run for 30-45 seconds... both methods have seemed to "reset" the heaters thermostatic control and I can again heat... but it is slow, awkward and doesn't always work.

Hope this isn't too confusing... but it does have me confused.

What are my next steps? I called my pool service guy but he appears too busy to return phone calls after a week...

Check your stack flue temperature/exhaust gas temperature as the heater gets to its shutdown point.

I did not put that comment in... apologies. I tested the exhaust temp (using the 10 sec "ON" button) earlier in the week and it was at about 280 - 300. On getting your response (thanks again!) I ran the heater and the water temp went to 102 without coaxing... and the heater exhaust was at 200 (I got diverted). The spa started this test at 95 because I ran it this morning.

It seems fairly consistent that if I let it cool it will allow me to get past the 97 degree "barrier" - although this doesn't work every time.

I will let the temp drop to about 90 and re-test.

Exhaust stack flue temp got to 326 before shutting off. The temp on the heater panel was 4 degrees higher (at 104 the spa was 100).

JFad said:
Exhaust stack flue temp got to 326 before shutting off.
Click to expand...

The MasterTemp panel was reading 104. That is the maximum temperature setpiint and where the heater will shutdown. It is operating properly there shutting down when temperature hits 104.

Spa was 100 or Aqualink displayed 100? Did you measure actual spa temperature?

Did you replace the heater thermistor with a genuine Pentair part or a 3rd party substitute?

You need to use a IR thermometer and measure the actual water spa temperature. Then figure out which temperature sensor is off.

It is the heater that is off... I used a laser thermometer and a "cooking" one to verify. I set it to 104 to get it past the 98 sticking point.

I bought Pentair - through an on-line pool equipment dealer, so it probably is. The other things that I replaced were also Pentair but through a major on-line retailing site so while the packaging says Pentair there is a possibility that it isn't.

I checked the thermistor at 10k (indoors) before I put it in.

I am thinking (but hoping not) that the control panel is bad. I did not find the troubleshooting section of the manual to be all that helpful - it seemed to say if there are no codes flashed (and I don't have any codes flashing) and nothing else fixes the problem get a new controller... am I wrong?

With the 10K resistor in place the heater should read at 76F while the Aqualink stops it at 102F.

If the temperature stays at 76F then you still have a problem with the new thermistor.

If the temperature drops you probably need to check the wiring from the thermistor to the board, and maybe replace the board.

In this new era, it was easier to get a new thermister than a resistor - no more Radio Shacks on the corners. I got a "generic" and put it in - first time it heated up accurately and didn't stumble on the 97 degree barrier. I know that this isn't a permanent solution but I am going to give it a few days and see what happens... but knocking on wood.

@ajw22 - Thanks for your help and insight!

JFad said:
In this new era, it was easier to get a new thermister than a resistor - no more Radio Shacks on the corners.
Click to expand...

In this era Amazon is a fine substitute for Rad Shack...

But in these broken supply chains not quite as fast! I actually have a few, but my son was working on a project... and took all of them. Some days...

I think it is working... but don't want to jinx it! I ended up with a new circuit board and the problems have gone away...

When nothing else makes sense I guess you have to look at the thing that is supposed to be smart...

Many thanks @ajw22 for your time and comments - without you and this Board I would not have been able to look at this intelligently and would have had a tech throwing parts at it at a far higher rate!
Reactions: mknauss
You must log in or register to reply here.
Thread Status
Hello , This is an inactive thread. Any new postings here are unlikely to be seen or responded to by other members. You will get much more visibility by Starting A New Thread

A
iAqualink and a Pool Heater