Major PebbleTec Issues for Over a Year - HELP!

We are in the Dallas, TX area, and had our 29k gal saltwater pool resurfaced in March of 2020 from plain white plaster to Ocean Blue PebbleSheen. We spent $12k. On the final day of installation, the company called and explained that the final step, the acid wash, should take between 4-5 hours, then we could start filling the pool. One acid wash guy came by himself, and completed the entire pool in less than 2 hours. At the time, we were pretty shocked, but of course didn't think much of it. Within days of filling the pool and the water clearing up, harsh dark blue streaks could be seen on the bottom of the pool (second pic with the vacuum taken about a month after install): 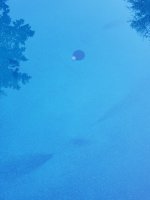 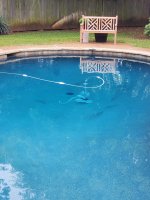 We contacted the company, they confirmed that it was "abnormal" but could not give an explanation of why it happened. I had done the pool startup myself and they tried to blame it on me, despite the fact that the streaks could be seen DAYS after filling, but they tested the water, and all levels were good. They drained & acid washed again to reduce the dark streaks. Immediately upon refilling the pool, patchy LIGHT colored areas started to appear, getting progressively worse over the course of a month. (This time they did the start-up themselves to rule out that it was something that I did wrong.) The light patchy areas were worst in the places where the old dark streaks had been, but also appeared in new spots too: 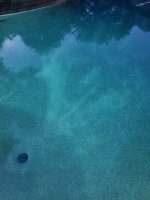 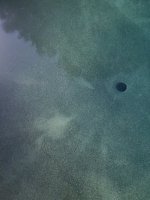 At this point I contacted PebbleTec directly, and they got involved. They sent a rep out twice to take the pool levels and test the light colored areas by pouring acid on it. No issues were found with the pool water (duh--I take great care of the pool) but the whiteness did seem to disappear with the use of acid. She also tested our hose water to see if there was anything crazy there, but it was fine. She said the only explanation is that either the second acid wash wasn't done "well enough" by the pool company, or that our pool salt somehow was causing the accelerated "calcification" (yeah, right, THAT would cause patchy & mechanical-looking "streaks") and she convinced us to have it acid washed again, but this time by PebbleTec reps. She told us to hold off adding salt to our water upon refill to test if that could be the issue. AGAIN, immediately upon refilling the pool, you could still see quite a few of the same light areas. Yes, some had gone away, but a new "ring" was added around the drain, and one of the original dark blue streaks CAME BACK: 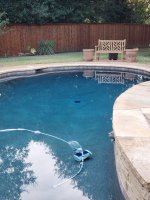 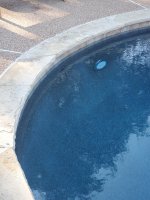 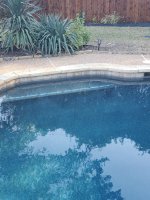 Now, a year after this saga started, PebbleTec came out again to test the flow of our water by adding dye, so see if water "pools" in those light areas. They did the test. The dye didn't pool, but was evenly distributed. Now, they want us to drain the pool AGAIN to cut out a section of plaster from the inside of our drain area (so as not to have to patch a visible area of the pool) and send it to a lab to see if it's "our fault" or "their fault." If they find that it's our fault, they have said in writing that they won't be held responsible for anything, period. Obviously, this worries us!! Who decides what is "our fault" or "their fault"? If it was "our fault," despite using a TF-100 kit, taking great care of the pool, etc, wouldn't the discoloration be even throughout our pool? It only appears in random spots throughout the deep end, and is still super patchy. At this point we just aren't sure what to do. Do we sue? How? Do we have enough proof? Do we go ahead with the plaster test and then sue? Do we contact an independent company to come look at it? Who?

Not only have we not gotten a penny back from the installation company from our original $12k, we also have spent about $1000 on filling the pool two extra times, adding salt two extra times, plus the other chemicals, etc. Now they want us to drain and fill again. All this doesn't even take into account the tens of hours spent on this issue over the past year!!! Help!
Reactions: Apsuhead
K

Please take a look at the TFP calcium nodules thread. The pictures you show don't look like calcium nodules, but the fact that the stains keep re-appearing in the same spots suggest that maybe the root cause is the same, where efflorescence in the concrete shell is causing small cracks due to improper plaster bonding.

I know it's a costly hassle, but I would probably go ahead and drain the pool again so PebbleTec can take a plaster sample. So far they seem willing to engage to solve the problem in good faith, and if they had wanted to blame you then they could have done so already. They know they have a reputation to protect.

If they determine it was the installer's fault, then they'll hopefully fix it and take steps to remedy the issue with the company that made the mistake. In the unlikely event that they say it was your fault, you won't be any worse off than you are now. At least you'll know more. Sure, it will make it harder to prevail in a small claims lawsuit, but your chances of that are probably not great anyways.

Another option, frankly, is to live with it. Post some lousy online reviews with photos and then enjoy your beautiful pool. Nobody else who swims in it will care about the discoloration.
You must log in or register to reply here.
Thread Status
Hello , This is an inactive thread. Any new postings here are unlikely to be seen or responded to by other members. You will get much more visibility by Starting A New Thread

Under Construction Thursday at 11:04 PM
roshanda
R
S
Pebbletec colors on back order?