When we built the pool, I decided against full automation for a variety of reasons including cost, the proprietary nature of available devices, and the fear an expensive system would quickly become obsolete and unsupported. I've seen a few forums members using Raspberry PI and Arduino controllers, but that kind of technology is way above my (retired) pay grade. If your preference is high tech automation or you have programming skills no reason to read on.

I've been kicking around the idea of using a WIFI irrigation controller to control valve actuators and VS pump speeds. Valve actuators require 24 VAC power (same as most irrigation controllers) and draw .75 amps. I purchased four Intermatic valve actuators at a cost of just under $400 and hijacked the Rachio irrigation timer out of the garage. I used Alexa to set up "routines" activated by voice. Routines allow the user to set turn on/off a series of connected devices in succession, with or without pauses. The system worked good, but since an irrigation controller will power only one zone (valve) at a time, transitions between pool, spa, waterfall, and cleaner modes were taking several minutes.

I ended up purchasing two 4-channel WiFi switches at a cost of about $22 each. Through the Ewelink Smart Home app, each channel is recognized by Alexa as an individual device. The module is powered by hardwired 7-32 volts AC/DC or USB 5 volts. Since my system already used a 24 VAC transformer to power the Intellicomm II Interface Adapter, I used this to power both the modules and the valve actuators. When purchasing a power source, choose one that puts out 24 VAC power and can handle the amperage draw of all valves combined.

I've included a photo of the relay board below. Each valve actuator can be run in both directions off one relay. Each relay has three connections: Common (24 VAC power), NC (normally closed) and NO (normally open). The actuators have three connections. The black lead goes to the other side of the AC power. The other two actuator leads (red and white) power the valve in separate directions. One lead goes to NC and the other to NO. When power is shut off, the motor turns one way and when powered up, it turns the other way. A limit switch in the actuator cuts power to the motor when the valve reaches it's resting position.

The Intellicomm II Interface Adapter installed in my system allowed external control of four pump speeds via the Intelliflo VS data cable. I had two inputs wired to mechanical timers and two to rocker switches in the load center. I wired into two of the four inputs and connected each to an individual relay on the second 4-channel Wifi switch. Each is recognized by Alexa as a device (Pump Low Speed and Pump Med Speed). I left alone two of the mechanical timer and switch inputs on the Intellicomm, but may connect them to the open relays in the future.

I named my valves "Pool Return" "Pool Suction" "Cleaner" and "Waterfall". When "Pool Return" is set to ON, water goes to the pool. When OFF, water goes to the spa. When "Pool Suction" is set to ON, water comes from the pool. When OFF, water comes from the spa. Same idea holds true for the two remaining valves.

I programmed four individual routines in the Alexa app, Pool Mode, Spa Mode, Waterfall Mode, and Cleaner mode. I included a screenshot of the Pool Mode program below. The first three modes above are intended for use when the pool is in use. Modes can be changed through Alexa by voice or by buttons in the routines section of the app. I found the system operates flawlessly, so far. I'm gonna work on daily schedules, but for now, the pump will remain on the reliable mechanical timer or an internal pump program.

I used a Rachio outdoor enclosure ($30) to house the switches and mounted it above my load center. The relays have four manual switches which correspond with the relay assignments...something that may come in handy for manual control of individual valves or pump speeds. The WiFi switch I purchased also comes with a remote (a bit of a novelty). Each button can be programmed to control on/off functions of several relays. It won't get much use.

I know this won't be everyone's cup of tea, but it works out great for my needs. Total cost (excluding the actuators) was about under $100. Add to that a few bucks for a 24VAC transformer and you have full automation of the valves. Pump control is dependent upon your own set up. 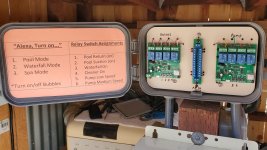 I forgot to thank @Jimrahbe for his assistance in sorting out some wiring on this project in a previous thread.

My Intelliflo VS is controlled by four switches routed to an Intellicom II Interface adapter which receives 24 volts from a transformer. The RS-485 data cable is connected between the Intellicomm and the pump data port. Any one of the four switches connected to the "Prog 1-4" connections...

Pretty neat!! Looks like you did a great job...

Glad you got it all up and running like you wanted..

As someone who only works on pool and spa equipment full time. I must say this was a good looking setup. I've run across DIY setups like this from people who have bought a new home and don't know how anything works, if it does at all. Some setups are extremely intricate and complex with gobs of wiring, relays, switches, etc. A lot of it is downright unsafe. So I always rip it out and use a standard automation box from one of the big three manufacturers.
Anyway, nice setup. I wouldn't have used mechanical timeclocks and you could have used any Vgreen or Neptune motor variable speed pump like a Waterway for direct connection. You wouldn't need an extra adapter like that intellicom.

Now if you could control your heater temperatures via alexa also you'd be doing great!

Thanks for the input. The builder set up the original configuration with two mechanical timers and two rockers switches to control four pump speeds through the interface adapter. It was nice not having to try to program the VS bent over and upside down. Having the interface adapter and the 24 VAC power supply gave me a good start to build on. So far, the system has run flawlessly.
M

Hey Rancho, looks great!
This is exactly what I want to do, but even simpler (for the time being ). I just need to control 1 valve. What 24VAC transformer did you buy? I'm wondering how sticky the specs are for the 0.75A ? I decided to go with the Hayward actuator and couldn't find a spec for it, but figure it is the same as the Intermatic... ?

My system already used 24 VAC transformer, so I didn't have to shop for one. It looks like there are plenty of choices available online. I would try to find one with a higher amp rating so you can use the same transformer to power the module and add additional automation in the future. The relay I found (linked in original post) accepts 24 VAC power for the module itself.
M

Thanks. Yes, the more I dig around the site, I find tidbits.

The system has been running flawlessly since the install. I decided to automate control of the SWG for ease of scheduling and to ensure power outages would not effect clock synchronization. My SWG being was controlled by an Intermatic mechanical timer.

I installed a simple $13 Sonoff R3 WiFi switch. The switch uses line voltage to power the board, so no need to use a transformer. For 240v wiring, line voltage enters on the left side terminals and the SWG control panel wires are connected on the right side. The switch is rated for 10 amps, so no issues with handling the SWG load. There's a manual power button on the switch.

I was going to gut my Intermatic box and install the relay switch inside, but instead decided to buy a new enclosure. I found a $17 box on Amazon. I modified it with spacers behind the mounting plate to accommodate the 240 volt wiring. I had to drill the holes for the conduit fittings. Overall, the box is a good value.

I powered up the switch and tested the system. All works as expected. 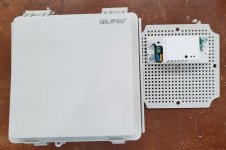 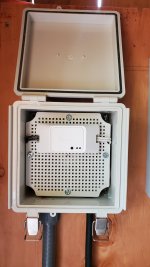 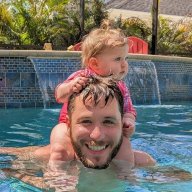 Kinda wish I had thought of this instead. I used relays just like this for my projector lift I built - this would have been so doable! This post needs more visibility, such a great simple idea.

Thanks Matt.
Reactions: matthewsunshineflorida
You must log in or register to reply here.
Thread Status
Hello , There was no answer in this thread for more than 60 days.
It can take a long time to get an up-to-date response or contact with relevant users.

Everything Else Sep 3, 2021
UKjames
U
M
Can I wire my lights individually? Aqualink RS4

Everything Else Friday at 7:37 PM
JamesW
J