Looking for some help with variable speed pump energy consumption

I have the Waterway Power Defender 140 1.4HP Variable Speed Pump PD-140. We have 1 skimmer, 3 return vents, and a Zodiac G3 pool cleaner. The run schedule when I moved in was set at 3450 RPM (max speed) for 4 hours from 8am-noon and 1250 RPM for 12 hours from 8pm-8am. I have found that the automatic pool cleaner works best at that high speed and doesn't do very well at lower speeds (duh). At 1250 RPM there isn't enough power to open the skimmer's weir door so it's more for some very low speed circulation (which I know TFP doesn't really care about). I want to more efficiently run my pump to ideally save some money and/or skim the pool a little bit more.

Sorry for spewing all that math (especially if it's wrong) - but does that all seem correct? Any other suggestions. Thanks as always for everyone's help

It looks in the ballpark.

If you want more precise figures get a clamp on ammeter and measure the current your pump uses at different RPM. Then Volts * Amp = Watts. Divide by 1,000 for the kWh used.

You will probably find it looks something like this... 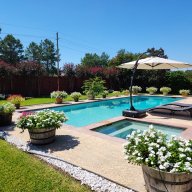 I really want to figure out which each of my valves do. I’m assuming I have one for skimmer, main drain, and vacuum. Can I just turn them off one at a time with the pump running? I also have a jandy valve that I’ll have to figure out.

On my system, it is a three way valve. Flow goes to the pump and you can adjust the amount from 50/50 to 100/0
You must log in or register to reply here.
Thread Status
Hello , This is an inactive thread. Any new postings here are unlikely to be seen or responded to by other members. You will get much more visibility by Starting A New Thread

A
Optimal regime for variable-speed pump?

Pumps, Filters, and Plumbing Aug 4, 2022
sparcel
S
B
How long should a pool pump last?