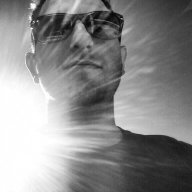 I just took delivery of this spa cover from Roberts Hot Tubs (www.rhtubs.com). Based on at least one other thread I read when doing pre-purchase research, I decided to open up and inspect the vapor barrier, particularly since I paid for a double wrap. On one of the cores, it looks like the vapor barrier split after being sealed and they just closed it up with masking tape.

To me, this just doesn't seem up to quality. Any vapor barrier is only as good as the seal on the closure and I'm not convinced the masking tape either provide an equivalent seal or will hold up long term.

I just wanted to get some feedback here to make sure my expectations aren't way out of line.

Edit: I initially avoided naming the company so it didn't seem like I was trying to shame or pressure them and to give them a fair opportunity to respond but since they haven't replied to me after eight business days I went ahead and updated the thread. 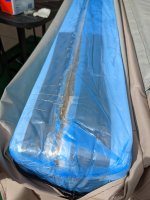 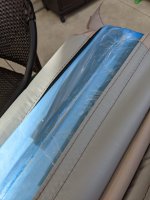 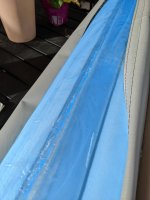 Do you see the double wrap?

Call and complain and see what they offer.

ajw22 said:
Do you see the double wrap?

Call and complain and see what they offer.
Click to expand...

It does seem to be double wrapped. It's the outer layer that's split. I just took delivery Friday so I'll contact them this coming week.

I would definitely contact them - only u can decide what remedy you wish to accept - replacement or discount etc.
Hopefully they have good customer service.
Reactions: 303Michael
J

Send it back for a replacement.

Who did you get it from?
Reactions: 303Michael and Mdragger88

JamesW said:
Send it back for a replacement.

Who did you get it from?
Click to expand...

Thanks. I've sent an email to the manufacture with the pictures. I'll share their name when they offer a resolution. I didn't want it to appear like I was dragging their name through the mud before offering an opportunity to make it right.
Reactions: Leebo, Mdragger88 and JamesW
R

It is common to seal the plastic sheet with tape, so repairing it with tape should not be an issues as long as it has a good seal. Pretty normal from what I've seen.
J

The water is a vapor, which can penetrate through materials quite easily unless they are thoroughly waterproof.

Packing tape is not a waterproof barrier.

In my opinion, it should be an unbroken waterproof seal, not a rip patched with Scotch tape.
R

I hear you @JamesW , it sounds a bit cheesy, but that doesn't change the fact that every cover I have cut up for the trash has taped seams. You may not feel that it is sufficient, but it is standard cover manufacturers practice. Pull the insert out of yours and you will find it taped as well.
I don't build them, just telling you what I've seen in the field.
Reactions: JamesW
J

RDspaguy said:
every cover I have cut up for the trash has taped seams.
Click to expand...

And the reason that the cover failed is usually water intrusion causing the cover to soak up water like a sponge.

So, it makes sense that the covers that fail all have taped seams.

Your sample has a selection bias, which means that the sample is not a fair representation of the general population.

The bias is a failure bias, which is the opposite of a survivorship bias.

Since you are only checking covers that failed, the sample is automatically biased.

Wow ... you'd think these manufacturers never heard of heat sealing plastic. There are all types of heat sealing applicators from bench top models to floor size sealers as well as hand held ones that you can zip along a piece of thermoplastic to create a freeform seal. In the electronics industry, we would routinely send out custom fabricated parts to various vendors for test and approval and we always sealed our devices using anti-static thermoplastic bags that could be purged with dry gas or evacuated and sealed. The equipment is fairly cheap ...
Reactions: Mdragger88 and JamesW
J

The problem seems to be that the plastic gets ripped for some reason and then the rip is just patched with packing tape instead of rewrapping it with a proper heat sealed plastic.

JamesW said:
It seems like they use heat sealed plastic.

The problem seems to be that the plastic gets ripped for some reason and then the rip is just patched with packing tape instead of rewrapping it with a proper heat sealed plastic.
Click to expand...

This is correct. It looks like it was heat-sealed too tight and it just pulled apart after the sealer arm lifted while the seal was hot. I'd have to double-check the other half but I don't believe it had tape all the way across the seam. The seal was what I expected so I didn't take a photo.

I'll respectfully disagree with packing tape making an acceptable seal. It may not be uncommon but It's definitely not an appropriate method to create a vapor barrier. If the tape was sufficient then I can't see why they would bother trying to heat seal it.
Last edited: Oct 13, 2021
R

@JamesW You make a good point. As a repairman I never see the stuff that is working, just the stuff that isn't. It applies to more than just covers, and perhaps explains my negative views regarding certain equipment. Nobody ever calls to say everything is working great, that's for certain!
Reactions: A.O., Mdragger88, Newdude and 1 other person
N

RDspaguy said:
Nobody ever calls to say everything is working great
Click to expand...

I tell my customers this on the daily.

‘Do you guys get a lot of repair calls ?’

‘In repair, miss, Yes. Every last one of them’.
Reactions: Mdragger88 and JamesW

JamesW said:
Who did you get it from?
Click to expand...

I bought it from Roberts Hot Tubs (www.rhtubs.com). I sent them a message on Oct. 11th and received a brief reply later that day stating they'd see what the next steps are. I followed up on Oct. 18th looking for an update and haven't heard back since.

Keep calling until you get an answer.
Reactions: A.O. and 303Michael
D

You probably bought it with your credit card so don't forget you have the credit card company as an avenue to dispute any charges as well. If they're being unresponsive. Just keep in mind there's probably a time limit for that as well.
Reactions: A.O. and Mdragger88
You must log in or register to reply here.

J
Do hot tubs use same chemicals as pools? (For a family member)

All Spa Owners Should read this: Valuable Lesson Learned: ALWAYS Pull hot tub cover cores out and check them when you receive a new cover