Long story short had a liner put in april 2020, and we've been fighting a leak for a while. Unfortunately we were bait and switches by our old pool builder from 20 years ago(3rd liner now) since he had broken arm and the new company is completely useless. Guys would say he would show up and never hear from him, then he would just show up super unprofessional. We found some leaks in plastics Hayward light bucket which is a know issue and he fixed that then fixed a crack in lowest stair tread. We knew there was a leak by stair as that would fill up with water maybe 1" per day(which is a lot and also did bucket test). By that time it was late sept/ oct too late for the step repair so we had to wait until this year and for pollen to die down. We drained pool to below steps and company came to fix the step crack and add support foam that went perfect. The pool guy said we would re-gasket the step gasket. while the water was low.

I didnt watch him the whole time, but noticed that he used a gasket between fiberglass steps and liner(which is correct, but then used a second gasket between the faceplate and liner. This is completely wrong as the faceplate is supposed to dig into the liner and push into gasket behind liner. With two gaskets it would never seal. So we filled pool up($500) and it leaked like a sieve a couple of inches a day. Used dye and found leaks all around the gasket tried tightening to no avail and realized after looking around online that the second gasket was not supposed to be there. This was his first liner pool and my bait and switch guy was there to help but it was a clown show. Again could not get guy to come out for weeks so i loosened a few screws and took one out at a time and removed the extra gasket between faceplate and liner. That stopped the big leak now it was a inch per day. I used pool putty epoxy to fix small leaks in faceplate interfaces plan is in oct ill drain and redo the faceplate gaskets over myself.

Now I can find any big leaks I loosing between 1/4-1/2 a day big issues is water behind liner I don't want anyone puncturing the liner. I suspect there is some leakage at screws so looking for good non hardening silicone i tried pulling all the screws and use regular but that doesn't seem like it will dry. I will need to get the screws out at some point so don't want epoxy.

As you can see on that second gasket i removed that shouldn't be there and the ribs are supposed to stick into the liner. Even the guy who was helping asked why is he using two gaskets. Sorry for the long post i had to vent.... 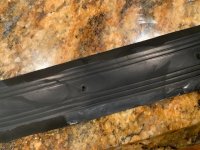 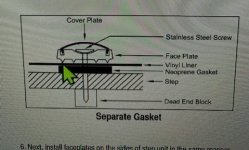 We'll have to ask someone with more experience in this like @jimmythegreek.
J

I don't get how these guys do this. It's so simple and basic stuff. If the screws hold, then the gasket amd faceplate are all you need. Have you checked the bottom 2 corners to see if the gasket meets itself. It's easy to leak at that intersection.
M

so game plan is to drain pool and open stairs up after pool season and do it properly. I had leaks along the corners which I fixed with pool putty, I have searched and search for another leak at step gaskets and nothing. I'm not sure if in removing the 2nd gasket may have moved things. I do see some screws in at a angle but no leaks I could see using leak dye. I suspect small leaks at the screws as I'm like 1/2" a day now and have a bucket test alongside. So idea was to use some underwater silicone pull each screw out and seal. After that I'm out of ideas. Guy that did the liner is a disaster any leak detection company is a month out or more, any other pool guy has a 2 year wait on pool and most even go near a vinyl pool anymore. No idea what to do for next liner in 8 years the builders down here are moving away from going near a vinyl pool.

Can you believe 2 gaskets obviously this guy has no clue so don't want him near my pool.
M

any thoughts on underwater caulk? I want to take each screw out again and apply good caulk, regular lowes just fell apart. I will be draining and taking steps apart myself after summer and redoing gaskets.
J

It's nearly impossible to remove the plates and gaskets amd re do them and install on the same liner. I wouldnt attempt it. You can glue a skinny patch strip for extra support and then re install that way all around the stairs, otherwise one missed hole and you have a leak potential. I'd make sure the stairs are the actual cause of leak. After season is done you might want to let it leak til it stops then you know for sure
You must log in or register to reply here.
Thread Status
Hello , There was no answer in this thread for more than 60 days.
It can take a long time to get an up-to-date response or contact with relevant users.

Everything Else Oct 4, 2021
jimmythegreek
J