Hi Andrew69, just stumbled across this as im also contemplating building a Lautner edge pool myself at our place in Sydney and am super impressed with your skills and posts. Did it ever get finished?
Marcel 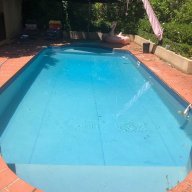 G'day from Melbourne, just across the border, I've also just found this great thread - how's your build going Andrew?
A

Hi All!
Been a while since I posted in this thread!

Pool is still under construction. Not much to go really (finish polishing pool surrounds, interior and pool equipment), Im just too busy to get it finished.

While try to get some more photos up soon 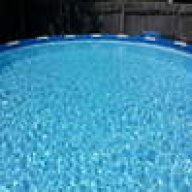 Oh wow! I was hoping you'd come back and not leave us hanging!
Welcome back. I'm seriously looking forward to more pictures!
A

Merry Christmas to all at TFP!

Surprise, surprise.....pool is still not finished!

Began a new business some time ago, so all my time (and money) has been devoted to getting that off the ground.
Now its up and running and actually making me money, pool is back on the agenda
Stay tuned for more photos in the next few months!

Hi Andrew - Impressive build - Just stumbled on your thread due to your post above - Will keep an eye out for updates - Awesome work....!
A

Cutting around the Launter edge to get it dead straight.
Yes it was "straight" before, but I want it straighter

Ive been told in no uncertain terms by the Boss that the pool MUST be finished this year so we can swim in it this summer.

Had some technical issues to overcome which I have now found a solution for, so the build can progress.
Will post pictures soon
Reactions: kimdurg

Cutting around the Launter edge to get it dead straight.
Yes it was "straight" before, but I want it straighter

Ive been told in no uncertain terms by the Boss that the pool MUST be finished this year so we can swim in it this summer.

Had some technical issues to overcome which I have now found a solution for, so the build can progress.
Will post pictures soon
Click to expand...

Please do post pictures. Its been awhile and we'd love to follow this build to the end!
A

Hello all!
Still going
Plan is to be swimming for Christmas
Will post pictures of the works progressing in a few days.
Currently have a fairly major supplier issue with some pool parts (in-floor cleaning nozzles) that is giving me sleepless nights so will post a seperate thread to see if someone knows someone that could help out.

I posted in your other thread.
A

So an update as there where we're at.
I did manage to source the body for the inflow cleaning nozzles. Astral Australia told my supplier half a dozen times that they no longer imported the nozzles into Australia, only for us to be told this week that they do have them in stock and that they have another 500 due early in the new year.
So, I now have the nozzles on the way, in Sky Blue (rather than white), but at a rather exorbitant price. Unfortunately, we dont have a choice at this stage, so just have to cop it.

Have made significant progress over the last few weeks, although it looks like we have done almost nothing.

So the wife and I spent several weekends clearing away all the debris and gluing the PVC back up to the concrete to make it watertight again.
A very slow process when you only have a maximum of 1/2" gap to play with.

Once that was completed, I still wasn't happy as I was concerned that the PVC could still come away over time and I was also concerned that heavy splashing in the pool could lead to water being forced into the drains and it could possibly flow over the back of the drain if there was any point where the water stop between the pool shell and the pool deck had been compromised, and unfortunately, there was no way of knowing.

So the wife came up with a idea to use a flashing that would cover the PVC and divert any splashed water so that it was unlikely to cause any issue.

I had a 316 stainless steel flashing bent up to suit. This flashing was then inserted into the drain and glued using an expoxy to the concrete pool deck. It also covers the top edge of the PVC so it cant come away from the pool deck.
We have had several storms as well as we have flooded the area and it works perfectly!
The previous leaks I had are gone and the flashing also stops you looking into the drain so you cant see anything so everything looks really neat.
While it was a time consuming and costly exercise, we're really happy with the result.

Biggest job left before completing the pool itself now is cladding of the bridge over the pool.

Cladding is an Australian made composite aluminium cladding that is non combustible.
I am bending the sheets so that they form the soffit of the underside of the bridge as well cover the stringers of the stairs in one sheet.
Manufacture isn't hard once you have ridiculously accurate measurements. The old adage of measure twice, cut once has never been more accurate!
Except its more like measure 10 times and cut once, because if you get it wrong, the sheet is pretty much scrap as they're too small to be remanufactured to be used elsewhere.

So working all day yesterday, I made and installed 2 sheets.
I will make another sheet today, but I won't install it yet (the sheets are bonded and secret screwed) as Im waiting for a couple of sacrificial anodes to be delivered so I can fix them to the structure of the bridge before I finish the cladding.

Sheets are temporarily propped until the adhesive cures, but I peeled off some of the protective plastic just to score some points with the wife
A

Pool interior has also arrived and it sitting in my garage on 4 pallets.

We decided on Quartzon
Colour is called Pacific Star. Its mid blue colour.
Not looking forward to carrying 210, 44lb bags upstairs though!
A

Work has been overwhelming this silly season so we are behind with the pool
Cladding will have to wait.

Found a bow in one wall of the pool. Its only 1/2 inch, but that more than enough to annoy me when each side should have been dead straight.
Have started to build out the bow with render so that the Quartzon goes on at 3/8" as per manufacturer specs.

Pool equipment is almost all here are well.

Also received my permit to fill the pool from the local water authority.
As other Aussies will know, we are currently suffering through an incredibly tough drought and have water restrictions in place.
You need a permit to fill any pool over 500 L in capacity.

My wife and I both feel pretty Dang bad about using so much water to fill a pool when farmers even 15 minutes drive away are struggling to feed their livestock, but we have done as much as we can to make the pool water efficient.
I have a 10kL (2640 gal) catch tank that will store rainwater than falls in the pool and then reuse it as evaporation lowers the pool level.
We also have a 27kL (7100 gal) rainwater tank that is fed off almost all of our house so any little bit of rain fall means we harvest a lot of water and store in onsite for reuse.
And as part of the permit, we are required to install a pool cover to minimise evaporation.

More photos to come this weekend

Plan now is to fill between Christmas and New Years and sit and enjoy a drink during New Years in our pool!

You have been busy! Good job finding the bow and taking care of it!

Glad you do the permit to fill the pool. Sad your area is going through the water shortage NOT a fun time for sure. Hope it ends soon.

New Years IN the pool would be awesome!!!

Its NYE hear in Australia and we didn't quite make it

Still waiting on some pool equipment (inflow cleaning distribution valves which were supposed to be in stock at my supplier on the 10th of December), but otherwise we have everything else and the missing parts won't hold up the progress of the build.
FINALLY finished work for a couple of weeks so now working on the pool full time.

Been spending a couple of hours each night on the pool plumbing and that's getting close to finished.
Depending on the weather tomorrow (ie if its really hot) I will finish off the plumbing otherwise its prepping the pool shell for the Quartzon interior

Hope everyone has a safe and joyous NYE and see you all next decade!

Man those valves have been a pain for this build! Here is hoping they show up and are what you need!!!

Wow this is an intense build. Thank you so much for sharing. Love the detail. We built a nearly net zero house and then a after pool and we would of killed to have someone with your level of detail involved.
You must log in or register to reply here.
Share:
Facebook Reddit Pinterest Tumblr WhatsApp Email Link