Iron in municipal water..not from a well.

I just received a report from my city water supplier and noted the following line item:

Interesting notes on the Iron content. Is this the reason why I have the problem?
Seem like maybe I need to get some of that Jack's magic pink stuff to get rid of the slight staining I see.

Some background on the issue: (Liner is now 4 years old and I began noticing slight discoloration last year).
I wouldn't say I have a big iron problem but definitely something. Every other year when
adding the first chlorine of the year just after winter, the water
turns clear green. What I usually do is replace some water until
the green goes away and it does eventually. I'd say around 1/3 of the water is replaced before turning back to blue with chlorine.
It may happen to be that sometimes my source water is from another place, they did mention in the report they have 2 water
sources to pull from which might explain why it doesn't happen every year.

I have also noticed brown stains on the skimmer (wiping the brown with a magic eraser get's rid of it for awhile) and those white
plastic mounts where the shallow end rope attaches to block little ones from going in the deep end, the submerged area is brownish. I also noticed
what looks like a beige colored stain at the water line of my gray colored liner all around
the perimeter.

Sounds like iron. If vitamin C gets rid of it, then your water has iron it. It doesn’t take much to cause stains when chlorine is around.

If you can find 3” cal-hypo tablets you could stuff some poly fill in the skimmer with cal-hypo tablet sitting on top of the polyfill. The iron will locally precipitate around the tablet due to the higher pH and FC levels and hopefully get caught by the polyfill. Otherwise you can just do what you normally do. Your water isn’t that bad, just a little nuisance staining.

Thanks Matt.
Ya it really isn't that bad and I do feel fortunate to not be on a well, as it could be much much worse.

I was trying to search the site I know someone had mentioned the number of when iron is a problem,
but couldn't find it to compare with the Iron content line item from the water utility.

You’ll notice their secondary MCL is 0.3ppm. That’s the mandatory level at which the water utility must take action to reduce the “contaminant”. 0.3ppm is when you would start seeing rust staining in sinks and toilet bowls.

I actually do get some rust staining in the toilet bowls occasionally.

At your levels, a greensand filter would virtually eliminate the iron content into your home. Might be worth the price of install....
Reactions: jtpipkin and borjis

I will look into that. Thank you! 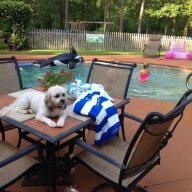 JoyfulNoise said:
At your levels, a greensand filter would virtually eliminate the iron content into your home. Might be worth the price of install....
Click to expand...

Could you add the ‘green sand’ into the pool sand filter? On top of the regular sand, maybe?

jtpipkin said:
Could you add the ‘green sand’ into the pool sand filter? On top of the regular sand, maybe?
Click to expand...

Nah. Doesn’t really work that way. All iron filters work by oxidizing the dissolved iron into insoluble iron oxide/hydroxide and then mechanical filtration takes it out. The greensand material simply catalyze the oxidation process. However, it has limited capacity and needs to be regenerated by soaking the media in a permanganate oxidizer. Then it has to be backwashed. If you put the green sand media in a sand it would just get all mixed up and eventually gets spent. Then it would be no better than the sand in the filter.
Reactions: jtpipkin
You must log in or register to reply here.
Thread Status
Hello , There was no answer in this thread for more than 60 days.
It can take a long time to get an up-to-date response or contact with relevant users.