Hey all I am new at installing above ground pools and just now finally able to put it up. We had a big problem finding someone to make the ground level and add sand for us. Most could do it but they were months booked. We finally found someone and had them level up the ground and compact sand on top.

That same day we started putting up the pool. First with putting down the tarp that comes with it.

Next we assembled the poles that slide inside the pools liner. It was difficult but we managed to get all of them inside the liner hole without errors. While we were putting in the poles we also propped up the pool while we were going around adding the poles. It seemed to have held it up for us pretty well.

We then assembled the legs around the pool as we went around it. one by one. The only issue here was getting the poles holes to match the cutout in the liner for the support poles to snap into. But again, we managed to do all of them without any errors.

Once we had all the support legs up and holding the pool we then began to fill it up to half a foot in order for me to go into the pool get any wrinkles out. I was able to get 97% of the wrinkles out so I was happy with that.

Then we put 20 16inx16inx2in paver concrete blocks under each let - though each block was sitting on top of the sand. They may be where things got out of sync.

When we continued to fill up the pool I installed the 2 inlets (the 2 holes coming from the pool) and 1 outlet (going into the pool) caps.

As it filled up a little a little under half way I looked at it and noticed that both the front and back poles (the 4 poles) were slightly going inward but still looked pretty straight across. The other 2 on the left and right were going inward a lot but I watch a few YouTube videos of this type of pool installed and they said that was normal to look like that as it fills up.

A little over half fool (almost to the inlet/outlet holes) I still noticed both left and side sides still being inward. I checked the lets to make sure they were extended all the way out and they were - but the paver(s) were pushing it toward the pool and not the other way. The poles were firmly down on the pavers - middle area. So at this point I stopped the water and re-evaluated about what needed to be corrected before going any further.

The decision was made to dig under the pavers and pull them out. So, as difficult as it was we did manage to get all the left and right poles off the pavers. The front and back were still on them I dug enough in front of the pavers to allow the paver to slant down-ward (digging the sand under the block about half way to its center) in hopes it would allow the pole to slide down eventually when the pool again started filling up to the water line and had the max weight applied to them.

But this is where I stopped. I wanted to get anyone's opinion as to what I should do at this point? Should I continue filling the pool up to the line and see if the poles push outward as they should be since it not longer as the restrictions of the pavers? Should I drain the pool and dig so that all the pavers would be flush with the sand instead of on top of it?

Of course the latter would be a pain but also would messing up the pool and whatever would go wrong. I wish I could tell you that everything went perfect but I am no Hannibal Smith - the plan defiantly did not come together.

Here are a few angles of my pool as it currently sits. 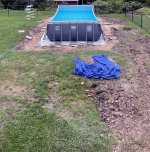 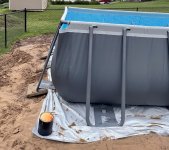 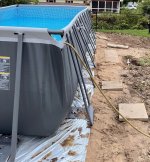 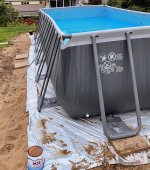 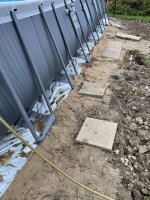 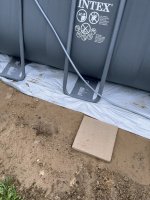 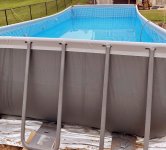 I did exactly the same thing 9 years ago with the next bigger size pool...

As much as it pains me to say this it would be better to empty most of the water.. Enough where you can get the pavers flat on the ground at the same height as the pool bottom under the legs.. once the pavers are flat then fill the pool back up.. As you fill the pool the sides will come out and be square...

I did exactly the same thing you did 8 years ago but I left my pavers sitting on the ground at the same exact level as the pool bottom... Most of the pavers were just fine.. However about 6 were not and broke in half... I had a hard choice and I made the decision to leave it alone in a wait and see what happens mode... That was 8 years ago and I am still seeing what happens.. The pool is just fine so far.. One corner where the 6 pavers broke is lower than the rest of the pool by about 1.5 inches...
S

That’s what I was afraid of having to do. Oh well at least I know what the pool should look like in this second go around
You must log in or register to reply here.
Thread Status
Hello , This is an inactive thread. Any new postings here are unlikely to be seen or responded to by other members. You will get much more visibility by Starting A New Thread

Just Getting Started May 25, 2021
cowboycasey