There seems to be quite a bit of questions lately regarding IntelliCenter Feature Circuits and how to associate those circuits with Pump Speeds and/or Flows and Valve Actuator associations. In addition, questions regarding the creation and uses of Circuit Groups (macros) appears to be another "hot" topic lately.

These questions are mainly due to the shortfalls of Pentair IntelliCenter documentation.
Since I had some time on my hands and frankly was kind of bored , I started playing around with putting a video together that hopefully takes over where the Pentair documentation leaves off.

This video is NOT professional grade quality (I know that ), but its the best this rookie could do based on my experience. Hopefully I will get better at these as time goes along.
Anyway, I had a bit of fun with it and I hope it helps some of the newer IntelliCenter users.
r.

A video of a polar bear in a snow storm would be a step up over any of Pentair's documentation.

Although, it is starting to look more a more like a Pentair release by the moment...

A video of a polar bear in a snow storm would be a step up over any of Pentair's documentation.

Although, it is starting to look more a more like a Pentair release by the moment...

It's youtube that's giving me a hard time. And on top of it, I'm just getting my "feet wet" with the whole youtube publishing thing. "video still processing" LOL....
Z

MyAZPool said:
There seems to be quite a bit of questions lately regarding IntelliCenter Feature Circuits and how to associate those circuits with Pump Speeds and/or Flows and Valve Actuator associations. In addition, questions regarding the creation and uses of Circuit Groups (macros) appears to be another "hot" topic lately.
Click to expand...

Hi @MyAZPool - In your video, it appears that your standard pool pump speed is 20 GPM and all of your feature circuits are higher volume/speed than that. While I have been playing with my feature circuits. My PB had set my pool to 60 GPM. I was creating feature circuits to slow down my volume/speed. However, they don't seem to do anything. Am I supposed to set the "Pool" pump to a low settings and use the feature circuits only to speed it up? thanks.

SlipperyPete said:
Hi @MyAZPool - In your video, it appears that your standard pool pump speed is 20 GPM and all of your feature circuits are higher volume/speed than that. While I have been playing with my feature circuits. My PB had set my pool to 60 GPM. I was creating feature circuits to slow down my volume/speed. However, they don't seem to do anything. Am I supposed to set the "Pool" pump to a low settings and use the feature circuits only to speed it up? thanks.
Click to expand...

@SlipperyPete
I've learned that setting the "pool" speed as the lowest speed is good operating practice. Remember, "the highest speed always wins". So using another Feature Circuit (speed) to set the speed lower as you are attempting to do now, will not work as long as the pool body circuit is on.
Try setting pool as your lowest speed and then use another speed/Feature Circuit to speed it up to the speed you want..
I think you will find this method will work out much better for you..
Thanks..
r.
Reactions: Charelston40, SlipperyPete and Jimrahbe
S

thanks @MyAZPool . That kinda what I was assuming. Thanks for the confirmation. If you'd prefer me to put this in a different thread, please say so.

What is the best practice for switching bt circuits and circuit groups? Prior to using this I only use the default spa and pool buttons on the app. It was nice that they knew to turn the other mode off. Now that I have the valves set up and I’m playing with different pump speeds and circuit groups, I’m learning the behavior of the ‘macros’. I’m doing some head scratching

Should I be completely cutting off my circuit group before turning on the next? A minute ago, I was in pool mode which is at 30 but I had a feature on that set the pump to 50gpm turned on too. When I turned on my Spa, the pump stayed in 50 gpm.

It would be nice to configure some “if this then that” with the macros. Am I correct to assume that I can't?

I’m trying to keep it simple at the moment. these are my circuit groups ...
While setting things up, I noticed a couple of issues with what I'd like..
So I guess my question is... what is the best practice to do what I'm trying to accomplish? Or am I thinking too much outside the pentair box?

@SlipperyPete
Okay, you're getting it but I should probably point out a couple of things which should clear up some misconceptions.

1. As far as the valves (Bubblers and Deck Jets). There are two positions. Home and 2nd position. When you make a "call" for that valve in the Circuit Group, it moves it from Home to 2nd position (the ON position).
There is no way to move the valve from the 2nd position to the Home position without turning off the Feature Circuit (Bubblers, Deck Jets). The simplest way to do that is to turn off the Circuit Group (Macro). In otherwords, those Feature Circuits are NOT like electronic switches that will turn off or on everytime you make a call for it.. If the valve is in the 2nd position and you make a call for that Feature Circuit again, it won't turn it off, the IntelliCenter will only think you want to turn it on (but of course, it's already on.)

3. If you want to keep it simple (and that would be my advice, especially as you are just starting out), then embed those Feature Circuits in the Macros' that you want to occur on a regular basis. Like everyday, once or twice a week, etc.

4. As far as schedules go, I would create a Circuit Group for anything that you normally want scheduled on a regular basis and always include either "Pool" or "Spa" body circuits (as the case may be) in the macro.

5. If you want to setup a Circuit Group that you only turn on manually (like bubblers or deck jets for a pool party etc.), no problem. I have several of those. Just set the egg timers for the Circuit Group to about the max that you think that you would want it on. Just remember though, to suspend the schedule of the cleaning functions for that time or right in the middle of your pool party, one of your cleaning/maintenance schedules might come on and change everything.

6. If your pool circuit is going right back on after you turn off a Circuit Group, then you have some overlapping schedules which you should not have. There is no better way to discombobulate things than having overlapping schedules. Ensure one schedule goes off before another one comes on.

If you want to post the various screen shots of your Circuits, Circuit Groups, Pump/Valve pages and Schedules (like below), we can take a look and possibly make some further recommendations for you. 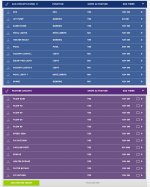 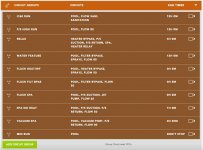 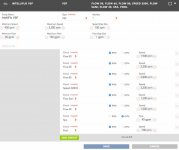 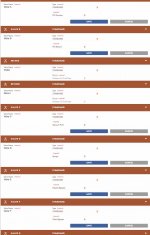 Hopefully, I have answered many of your concerns here...
Thanks...
r.
Last edited: Jun 2, 2021
Reactions: Charelston40 and SlipperyPete
S

thank again for all the info.

I found an old post from 14+ months ago which someone mentioned...

for all of the circuits that are controlled via a pump, the pump will defer to whichever circuit has the highest speed. If you are running a circuit that is defined by a flow rate, and not a pump speed, that is nested in with the others, it appears that the pump will only control to the pump speed.
Click to expand...

That explains one issue I'm having. My pump speed isn't changing if I turn on the spa while another circuit group that controls the pump flow is also on. In living with the understanding that the "highest speed always wins", i didn't realize the caveat about flow vs. pump speed. My spa is set to 3400rpm and the other circuit groups are all set on GPM so I can control the amount of water coming out of the deck jets and the bubblers. The logic behind the SPA & rpm is to get as much flow as possible no matter what.

I missed that before.

As for the circuit groups(macros), I think I'm putting all of that on hold. I have my intellicenter controls in my Home Assistant. I just started playing with node red. I've gotten it to work exactly like I want at the moment. The main goal to have buttons my wife could push when the kids were playing in the pool or when we want to sit outside and just listen to the bubblers. I don't think I'm ready to schedule all of these things b/c they happen at random times on random days.

Here is a screenshot of my HA dashboard and the node red flow that triggers when I toggle the deck jet or bubbler feature. I need to create some action for my 'Spa' button. When I press it, I want to make sure it turns off the other pump speeds.