Ideal FC for a NON closed pool in winter

I am not closing the pool in NORTH GEORGIA... I like to look at it!

Water is cold... no swimming.. no heater

There's a general accepted thought that algae won't grow in water colder than 60 degrees F, which yours probably is. However, I find it easy to maintain a normal chlorine level all winter because the cool water and low sun make last a lot longer (weeks between adding instead of days), so it's pretty cheap and easy to just keep the pool fully swim-ready, even if everyone ignores my offer to swim when the water's in the 40s! I don't obsess over the FC level much though, just testing it every week or so.

You also don't need to run the filter for 13 hours a day, really any time of year but especially in the winter. A couple hours at low speed is probably sufficient.

I just realized you have an SWCG -- most of them don't produce chlorine when the water temps are low anyway, so you're probably better off turning it off, reducing the pump time, and just adding some bleach when needed until spring. 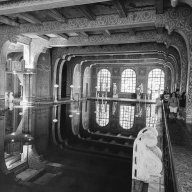 Same as above... water just hit the 50's here, so I figure my IC40 will stop producing soon. I kept my old cell and cut the cord from it and placed it in place of my new cell. I then just bagged the new one with rubber bands and disconnected it from the system. I'll just add chlorine from the bottle for now..
You must log in or register to reply here.
Share:
Facebook Reddit Pinterest Tumblr WhatsApp Email Link