Jump to latest Follow Reply
You are using an out of date browser. It may not display this or other websites correctly.
You should upgrade or use an alternative browser.
O

One would think that when mixing white cement with white limestone aggregate, the final pool plaster product would always be white. But that is not always the case.
Unfortunately, white pool plaster sometimes turns gray (or grey) either immediately or a few months after the pool is filled with water. So what causes that to happen?

The concrete/cement industry has documented that late hard troweling can cause a cement surface to darken, mottle, and spot. Also, adding a high dosage of calcium chloride (CC) to a plaster mix causes a slight darkened (graying) hue to develop. The combination of the two issues is really problematic. The pictures below are plaster coupons from an experiment conducted by onBalance and demonstrates how white pool plaster can darken and mottle. 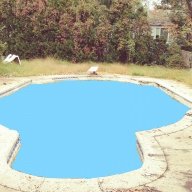 Ok, so I did follow your reccomendations for proportions of white pool plaster to fix some pop off areas in my pool. Interesting to note is some of the newly mixed patches are white, and some are a slight grey colour. I did use Sika white concrete bonding adheasive instead of water on them, but I may have used some additional water (which my water is very hard with calcium) on the mix to keep it a little more workable as it does dry fast. I am now about to plaster my whole pool with a thin layer of the plaster mix, but I don't want it to turn grey. I am not adding any calcuim to the mix, could it be in the Sika liquid bonder?
O

I am not familiar with the Sika bonding agent, so I don't know if that had an effect on color. It may be better to use a type of bonding agent separately that is applied to the old finish first and then placing the main plaster coat over the top.
Reactions: mikes112
You must log in or register to reply here.
Thread Status
Hello , This is an inactive thread. Any new postings here are unlikely to be seen or responded to by other members. You will get much more visibility by Starting A New Thread

My white pool plaster turns grey or off white when wet.