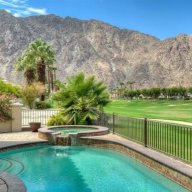 My MasterTemp 250 heater works fine and heats the hot tub to the set point (104F). It cycles on and off as the temperature changes while it's being used. The problem I have is only when the jet pump is running.

Once the Jet Pump is turned off, the temperature correctly reports and the heater fires up again.

Unless someone has a better idea I think I'll replace the thermistor and the high limit switch.

Which thermistor do you intend to replace? You have a few in your system.

A week or so ago I had gone into the "VSP Setup" menu and lowered the MAX speed from 3450 down to 2000. I thought that running the filter pump at a lower speed would result in electric savings.

I've just gone back in and and reset it back to where it was and everything now appears to be normal again. With the jet pump running the temperature drops a few degrees, firing the heater back up again till it reaches the set point.

FYI, your Aqualink RS does not use the thermistor in the heater for temperatures control. The Aqualink has its own thermistor inserted in a return PVC pipe.

ajw22 said:
FYI, your Aqualink RS does not use the thermistor in the heater for temperatures control. The Aqualink has its own thermistor inserted in a return PVC pipe.

When under control of the Aqualink the heater thermistor displays the temperature on the heater control panel but does not control the heater cycling.
Click to expand...