Let me just start off by saying, sorry for the long first post!

Recently bought a home with a pool, and since we are first time pool owners we knew that we needed to learn. Had a friend of a friend come out (who is VERY knowledgeable and a regular on this forum) and walk us through "pool school". Obviously I am still learning, and trying to recover from what the previous owner did (or didnt do).

Brief background on the pool. Previous owner was a DIE hard E-Z pool chemical user! He swore by the stuff. Told us multiple times that all he did was go out and throw 6 scoops of the stuff into the pool every Sunday and he never had any problems. When we tested the water we realized he was VERY wrong!

We bought the tf-100 test kit, and while waiting for it to show up took a sample of water to the local pool store. They tested the water, and stated that they couldnt even begin to tell us what chemicals to use due to our TDS being > 2500. They said to drop a sump pump in the deep end (which I dont have, it is 4' the whole way) and to place a garden hose in the shallow end, and to do this for 36 hours to replace some of the water. We did this process last weekend, and then our test kit showed up and we started to test the water for ourselves.

I followed the recommendations from pool math, and added 298 oz of 12.5% bleach and 389oz of Borax 20 mule. Not knowing any better I just basically added all the chemicals in quick succession by broadcast spreading them across the surface of the pool and using the pool brush to dissolve any clumps.

Proceeded to perform tests the second night, and they showed the following:
FC - 0.5
CC - 1.0
pH - 6.8
TA - 90
I didnt test for CYA or CH as I have a vinyl pool and it is my understanding that they wont change much from day to day.

I followed the recommendations from pool math, and added 298 oz of 12.5% bleach. I only had 8 lbs of Borax 20 mule left, so I added what I could. I then felt like I needed to run to a pool store that was open nearby (Leslie's) and get some pH up. While there I had them test my water too. Their test results were a bit shocking, to say the least.

Their recommendations were too increase the TA, and then to use products called Metal Free and CU later. I understand that the Metal free will bind to the metals, and cause them to sink to the bottom of the pool and then I could vacuum them to waste. I would ABSOLUTELY think that was a bad idea, but am looking for thoughts from the experts?

I keep adding the 12.5% liquid chlorine as prescribed, but am not seeing the desired increases. After reading around further, it could be due to efficacy decreases from it being stored too long at too high a temp (or just being plain old). I havent tested it to see what it actually was, I have just been assuming it was full strength and using it.

Based on all the reading i have done on the forums in the past couple of days, it looks like I should go back to pumping and then replacing water. Is it okay to do it at the same time? I have also heard that I shouldnt drain more water than to the lower lip of the skimmers before refilling it to near the top lip of the skimmer. Can I use the sand filter and backwash hose to just drain to waste in the yard, or should i just use the cover pump to remove (which works about as fast as I can refill)? There are wrinkles in the vinyl liner, and it is my understanding that it could be caused by poor chemistry (which we have) or by ground water pushing on the liner and then settling again.

If I do drain and refill multiple times, should I worry about my chemistry before/during/after?

I am so confused by all the misinformation available on the web, and just want to get this pool under control!
C

I swear, I REALLY tried to make sure I included all pertinent information.

Water looks amazing. Havent had any problems with clarity/odors/etc. *knock on wood*

I would keep adding about 5ppm per day of liquid chlorine while you are exchanging water.

Don’t add anything else. You need to get your cya down to 30 or 40ppm. This will also dilute your copper. Big exchange!
P

Just a quick update. Still working at it. CYA tested today at ~55. Garden hose is taking FOREVER to refill it, luckily we have had a bit of rain that has helped some.

Next stupid question / thought. Is there a way to test for copper dilution levels with the TF-100 that I am just missing? 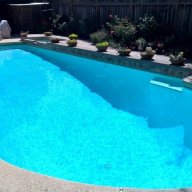 Maybe take another sample to the pool store for the copper test. That's the only test I'd pay any attention to from them. For the rest, trust your TF-100. It won't let you down.

If you still have copper, I'd go with a monthly maintenance dose of Metal Magic sequesterant. It will keep any metals (if you still have any) in solution and off your liner. I usually add about 16 oz. a month in my pool and it seems to do the trick.
P

@Dean, forgive my ignorance, but another person told me that I shouldnt ever use a sequesterant product since it would require me to have to change my sand out in my filter more often. I dont know how sand gets "used up", so no clue why you would ever need to change out the sand.

still a TOTAL newbie, so just trying to absorb and use what everyone is telling me.

Phelps.joel.a said:
I shouldnt ever use a sequesterant product since it would require me to have to change my sand out in my filter more often.
Click to expand...

Metal sequestrant has no effect on your filter. They must have been referring to flocculant or clarifier.
P

mknauss said:
Metal sequestrant has no effect on your filter. They must have been referring to flocculant or clarifier.
Click to expand...

That is good to know! I had done some google research and saw a product called Cu Lator that I was thinking about using. If my pump and refill cycles dont eliminate the VAST majority of the copper, would it be okay to use that? It seems to trap the metals in itself, but I am also aware that there are a lot of snake oils out there that promise things too.

You can try. I have not heard of much success with the culator thing. To be honest, the best way to get rid of copper is to drain the pool and refill with clean water.

I tried the Culator product one time and I didn't really notice anything on the bag. itself. It says that you should see some type of color on the bag based on the type of metal in your pool. Not sure if it worked or not, but at $50 a pop, I won't be using it again.
You must log in or register to reply here.
Share:
Facebook Reddit Pinterest Tumblr WhatsApp Email Link

H
how to remove copper

J
Copper in the Water