High chlorine level in winter cause damage to pool? 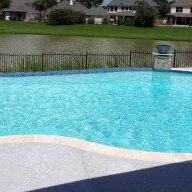 My friend around the block had his pool built at same time as I did this past summer in June.

He has a "pool guy" coming every two weeks. I've tried to convince him on how easy it is to do yourself with just a little knowledge and proper testing kit...but....no go

He told me he contacted his pool guy because his noticed his chlorine was only around 1. (knows nothing of the CYA/chlorine relationship)...uses trichlor pucks

He told me his pool guy said he'd be fine with his chlorine being 0 to 1 all winter...and that he's seen several pools ruined in the winter time by too much chlorine.

So I asked my friend if he mentioned anything about the Ph, water temp, and TA and how they affect the CSI.

Other than increasing the cya level too high, I don't know of any reason why a chlorine of say, 7 all winter would be bad for your pool.

This is my first winter with a pool so I'm keeping my chlorine level around 6-7 since my CYA is 50-60....with nobody swimming in the pool, and colder water temp, I imagine algae is not as easy to pop up compared to heat of summer.

Anyway, anyone know if there is any truth to this? My initial thoughts are this is just not fact...but figured I'd post it here and let the real experts chime in

Elevated FC will not harm the pool.

pH, CH, etc are far more of an issue.

The 'pool professional' has no clue about water chemistry.