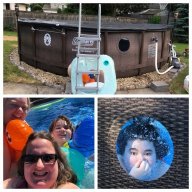 Hi pool friends! I’m in the middle of a slam and I have a couple questions. I added 10% liquid chlorine today to get it up to 16 I have tested like 4 times today.

my overnightCL loss yesterday/this am was 4 I ran my intex sand filter and the cartridge skimmer (also attached to a intext cartridge) all day today it was uncovered in the sun. So I lost more during the day. I added to get it to 16 around 6 pm and I tested at 10 pm it was still not at 16. So I added more per pool math. Btw my water is crystal clear. I brushed, vacuumed and cleaned my cartridge filter today.

2. my pump manual says to run my pump no more than 12 hours a day. Am I ok to run it all night? Slam instructions say run it 24 hours a day till you stop slamming but I don’t want to burn out my brand new pump?

Thanks for your help!
Ceri

New question this AM it’s down to 13 again. Do I add more chlorine now to get it back up to 16 during the day or do I wait till tonight?

TimandCeri said:
New question this AM it’s down to 13 again. Do I add more chlorine now to get it back up to 16 during the day or do I wait till tonight?
Click to expand...

Add liquid chlorine to raise your FC back to SLAM level. This should be done at least 3-4 times per day.
Read SLAM Process

I suggest you re-read the SLAM Process and follow it to the letter
The 'M' is very important... MAINTAIN - when you test and its under SLAM level, add to bring back to SLAM level. Since you reported CYA to be 40, your SLAM Process level is 16.

You also stated that you added yesterday at 6pm and at 10pm it was at less than FC 16. That's because the chlorine is killing the algae and in the process is being expended. Try this to be sure you are attaining SLAM Process level. Add the calculated amount of chlorine to get to 16 - 30 minutes later test to see if you got to FC 16. If you did, you know your pool volume is correct and your chlorine is at the listed strength.

If you can test 4 or so times per day and continue to bring the FC back up to SLAM Process level, you will get thru your SLAM quicker.

Check your ladder and anything else in the pool for hidden algae. Clean as necessary.

I can't speak about running your pump 24 hours per day. Maybe call the manufacturer and ask them.

Thank you both! I should have re-read it before I started it again. My bad.

As for contacting Intex about the pump.... ugg, I doubt I will be able to speak with anyone? They say they are 3-5 days backlogged) Anyone have an inxtex pump that can give insight??


"Test and adjust chlorine levels as frequently as practical, but not more than once per hour, and not less than twice a day. Chlorine additions should be frequent, especially at the beginning. Algae and other organic debris will consume chlorine very rapidly at first. As things progress, you will lose less chlorine each cycle and can add chlorine less frequently."
I should have had that reminder before I started!
I don't keep ladders in, we only have them in while we are swimming, after we get out, we take them out, and put the cover on so It can't be that? I have brushed all the seams along the sides. I think I am just not maintaining it up to where it needs to be. It may have happened last week when my pump died... Also, I don't know why I didn't think I could need to add chlorine it several times a day. Dough! I will say it would be helpful for it to say in the slam instructions to test the water 30 min after adding chlorine. Now I know!

I have read several of the articles on running tests, I need like testing for dummies I swear. Video instructions on how to actually do all the tests might be helpful. (You guys have helped me a lot over these past few weeks!) And then step by step, how to add the chemicals, then how soon after to test again. Just some suggestions .

When do you recommend vacuuming and brushing during the process morning or afternoon? I did it last night at 6 PM my pool is crystal clear. Thank you! Off to add more liquid chlorine and test 30 min after! My "cat box" is keeping me busy today. LOL

(My husband deals with the cat box in our house, I refuse, he refuses to deal with the pool my sister called the pool my cat box. LOL Only cat owners will get this struggle)

The pump should be fine to run continuously. Only issue is if the filter plugs up. If it is plugging quickly, take it out overnight so you have circulation.

A couple reasons to test FC 30 minutes after your last addition.....
For the most part, really no other reason to test 30 minutes after your last add.
You must log in or register to reply here.
Thread Status
Hello , This is an inactive thread. Any new postings here are unlikely to be seen or responded to by other members. You will get much more visibility by Starting A New Thread

C
Only add 17 oz of stabilizer?