After signing the contract mid January, followed by excuses, additional charges (resulting from their mistakes) and contractor issues we are finally in the going into the pre-plaster phase. Today the PB came out to make sure we were ready to request the pre plaster inspection, then walked me through the final steps of construction. When we got to the plaster he said "Is there anything I can do to talk you out of using quartz and going with quartz fusion instead? You wont be happy with the quartz, it's well worth the cost to up grade to quartz fusion" etc.. This is after the salesman told me I'd be happier with the quartz and the cost to upgrade to the fusion wasn't worth it. I should have done my research ahead of time but didn't. They offered to do the fusion at a drastically reduced price but I don't know if this just another unnecessary upgrade they are trying to sell me. Prior to this we have had escalate to district management in order to have them remove a total of over $10,000 in charges. Charges that management admitted would not have been necessary had they done their job correctly. I'm so beyond done with this whole process.

That said, I have a few questions for those building or that have recently built in North Texas.
1. Approximately how long from contract to swimming did your construction take?
2. did you encounter any additional charges during the build?
3. Any problems with contractors not showing up, then rescheduling?

For the Pros:
Is it worth the upgrade from quartz to quartz fusion(micro pebble)?

Thanks in advance for the feedback.

Each pool build is different and the delays are different..

I think you are having the typical pool build frustrations.. Some pools builds are perfect, but most are not, for a variety of reasons..

Additional costs cannot be charged unless you approved them with a change order or it is in the contact.. So a puzzle there.

I am not sure there is any real difference between quartz and quartz fusion, but if you go with quartz be prepared for the plaster to look streaky and blotchy, especially if you have a dark color.

I have fine or mini pebble and it does not have that problem, but it is like sandpaper on your feet..

Pool build was a nightmare. Process took from June to October with me having to finish the process myself, as PB went out of business in the process and with unpaid subs.

Unfortunately in Texas anyone can say Shazam and the next day they are a PB.

Unfortunately, your story is not uncommon. There are a host of reasons for schedule slips, but one of the biggest I know is a fact in my town, is most PBs dont have enough cash flow. They have to be paid by customer A before then can buy product to finish your pool.

Another reason for these delays are that a lot of PBs use subcontractors, and those subs have other customers too. And they might require down payment from the PB.

And then there is the weather. Rainy weather is not conducive to keep on schedule for any sort of construction project. If your project is pushed due to weather, then everyone else in front of you got pushed too.

Sorry, but I cant help you out with the other things you mention.
J

Not having cash flow is all the reason not to be in business and should not be an excuse. PBs require milestone payments before doing the work anyway.

The problem is the PBs get themselves in trouble bc they use customer Bs money to pay for customer As work and then when PB doesn’t have enough backlogged customers, they find themselves out of money.

Just like all other successful business, equity is required. 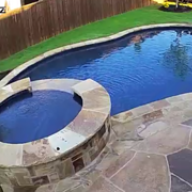 We signed with our PB in mid April and digging didn't start until almost 2 months later. It was mainly rain that caused the delays, but I think if our PB would have been a little more detailed in his note taking we could have shaved a week or two off of that. Once they started digging everything started happening pretty fast, that is until now. Gunite was finished two weeks ago and tile and coping was supposed to start yesterday, but the crew no showed.

I haven't been terribly frustrated with the process, I guess because I mentally prepared myself to expect that we wouldn't have the pool finished before the end of summer. If they happen to get it done sooner that will just be gravy on top. I have been a little frustrated with some mistakes the PB made in terms of not making sure things that we discussed in meetings made it to the construction plans. However, the PB has been great in owning their mistakes and not charging us for them.

We too are going with Quartzscape, but solely for the smoothness on the feet. Our PB really didn't seem very interested in up selling us, but I guess that I told him from the start that we were on a budget. I have read some threads on here about the splotchyness of Quartzscape. It does mildly concern me, but it doesn't look like anything that I couldn't live with. I would prefer Pebbletec, but the wife insisted on the Quartzscape for her feet.
You must log in or register to reply here.
Share:
Facebook Reddit Pinterest Tumblr WhatsApp Email Link

Tuesday at 11:13 AM
ajonesaz
A
D
New "Swimmer's" Pool in Houston Texas