Help, just opened after my first winterization. Stains of all seasons. 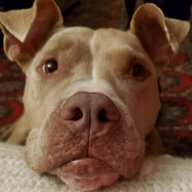 Opened late this year because if illness and once the cover was removed I knew I had a problem. I installed a SWG and aqua logic system while pool was still covered and was hoping for Clear water, but pool had algae growing. Numbers at first were
Fc&tc 0
Ph 9+
Cya 20
I have a Taylor K-1003 and strips.

So Added muratic to drop ph to 7.3, I started a slam and have been keeping levels maxed for chlorine as much as I can tell with my test methods. I put a few pucks into skimmer to bring up cya. My current pool store levels are as follows at the end of the slam with tc holding:
FC 7.5
TC 0
Ph 7.6
TA 80
Ch 220
Cya 60
Iron 0
Copper 0
Phosphate 2500ppb
Temp 72

I am just about to fire up chlorine generator as I added all the sale during slam. I was hoping the staining would get better during slam but no. I am considering a absorbing treatment but I tried a puck and vitamin C tab with no change. The new stains are like megapixels. Thousands of small dots everywhere. Other pics are from the amoeba shaped stains that carried over from last season. Any ideas?? Or should I acid wash next spring?

It almost looks like damage to the plaster. It's difficult to tell from the pictures. Can you feel the spots with your hands? Are they rough?

Hi sbc. I took those pics before I walked on the steps. They are very rough. The entire pool bottom was semi rough last year, (pool sat for 4 years before I bought house). I had planned an acid wash in April and possible paint to smooth out the roughness in lew of a replastered, but I was sick for 2 months so I skipped it. Now the bottom is 80 grit paper. And the stains from last year are back and the new microdot stains are everywhere. I went to Leslie's and they told me to lower phosphates. They said b they were 2500ppb. My water is at 1ppm fc and .5 tc after a slam. New chlorinator and new/used aqualogic been running for 2 days. Trying to get it up to 3-5ppm. We had a power outage for 2 days when I was coming down from slam and missed 5ppm. Oh boy!!!!!!!
S

If that damage to the plaster is as bad as it looks I don't think there's any way around a replaster. I think it's just that the rough surface gives the algae a good place to grip onto.

Phosphates won't matter as long as FC/CYA is correct. You could fill your pool with fertilizer and if the chlorine is kept sufficient nothing will grow.
You must log in or register to reply here.
Thread Status
Hello , There was no answer in this thread for more than 60 days.
It can take a long time to get an up-to-date response or contact with relevant users.

B
SLAM or Not