Help! Our brand new gunite pool was plastered (plain white) 11 days ago. Plaster was done on Friday and they started to fill immediately. We never received any instructions from our PB and knew almost nothing about pools bc they said they had someone starting everything up for the first 28 days. I noticed that the fill was going very slowly and tried to add a second hose, but in the process splashed some water into the shallow end.

The next morning I texted our pb because the splash marks were still visible (although almost dry at that point). He said it was no problem and would disappear once the water level got up to that point (whew!) He then told me to go ahead and stick a hose in the shallow end and let it fill from both sides, so I did. I noticed that the water pooled in a couple spots before running down into the deep end, but assumed it was fine because our pb said to do it. It took another almost 10 hours to get up to the shallow level and cover the puddles from the second hose, and at that point the wet marks disappeared.

However, yesterday they reappeared (along with a bunch of other stains), and now I’m worried. The people taking care of the startup keep saying it’s fine and they’ll be able to take care of the stains once the pool gets clean. But after reading extensively about plaster startups for the past week, I’m nervous that the water chemistry hasn’t been getting balanced the way it should have and that the pooling may have caused permanent discoloration.

Is there anything at all that can be done to address this issue? I’m sick to my stomach over the $$$ we’ve spent on this project, only to be faced with the prospect of immediately redoing the plaster...Since this all happened I’ve of course found tons of warnings about filling from the deep end, but no info about whether this can be fixed.

I can't imagine that causing permanent stains. I am a bit surprised that it's OK to fill it with a hose....I'm guessing this is a big pool?

I think normally you want to fill on fresh plaster as quickly as possible. There are some great pool builders and experienced people here that will give you some answers.

While you wait, add the info to your profile (where you are, pool size, type, etc). It helps people answer more accurately when you have questions
C

Yes, it’s a large pool (20x40 with an 8ft deep end). It took about 75 hours to fill with our garden hose (that’s what our pb said they always do, I asked about the fire dept doing it and they just laughed...

Cantabrigienne said:
Yes, it’s a large pool (20x40 with an 8ft deep end). It took about 75 hours to fill with our garden hose (that’s what our pb said they always do, I asked about the fire dept doing it and they just laughed...

Are you really rural or something? Where we live there are many companies with tanker trucks, like retired (and well cleaned) gasoline tankers that will bring 9,000 gallon loads until you’re full. Fire department tankers are fairly small in comparison and would take a lot of trips to completely fill a pool that big.

At least where we live if you have a well it would drain the well too much even though we have great groundwater and be hard on the well pump. For those with municipal water it would be cost prohibitive....really pricy.

I am no start up expert. But we know that you do not run water like that when filling a pool. And we know it can discolor the plaster if you do what occurred. Now, it should fade if that is all it is, though to be honest it will still be somewhat visible overtime, but most folks will not notice. Plaster finishes are not perfect.
Are you following a start up process now? If not, review Plaster Start-Up Guides - Further Reading
The plaster company should have provided a start up process. Relying on a pool builder to follow it is dicey. Get your own test kit ASAP and take control.
C

We are not rural, we are on city water. (Perhaps there are water truck services like this, I just don’t know anything about it and never knew to ask.) We just did what our pool builder said he always does. He is using another contracted person for the 28-day startup process, and said the person doing it warrantees the plaster. I’ve spoken with him a few times and he said everything he sees in our pool is organic staining that will come out once he gets chemicals into the pool. I’m just nervous after everything I’ve read here that they don’t seem to be following a standard startup process...
Now they are talking about a very light acid wash as a “worst case” scenario. (???)
Last edited: Apr 22, 2021
C

I wasn’t really planning to take on all the details of pool maintenance at this point (I have 4 littles ages 0-7 and was just planning to pay for a service until I have more time to learn all of this.) But the more I read the more it sounds like maybe I’m going to need to invest a lot of time into this now...

is there anything I should do to make sure we avoid damaging the pool / equipment at this point? It is ok to let them try to address these stains however they see fit? I asked if an acid wash would hurt tbe plaster and they said they would only do a “very mild” one.
Last edited: Apr 22, 2021 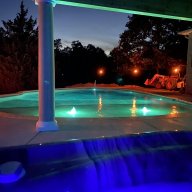 Good morning from a fellow Arkansan. I am a first year pool owner. There is an amazing support group here and once the readings are correct, things are easy to stay on top of and won't take much time. The stains will lessen with time but an acid wash will not cause any short or long term issues. It's a normal practice for stains on plaster. The amount of time between filling and protection of your equipment is no worry. All is well. It seems like a overwhelming task at hand but you have done yourself a great service starting here. If I was closer I would help you get things stable.
Reactions: Cantabrigienne
C

Ok, they’ve tried some stain removers with no luck so far. PB is talking about draining and acid washing the pool, but I’m worried that will compromise our brand new plaster job. He says it won’t because they will only do a very mild acid wash that won’t remove any plaster. Is this a bad idea? Is there anything else I should be doing at this point? I know very little about all of this but am willing to put in the effort to learn (I just ordered a TF-100 kit today) but am afraid of doing anything out of ignorance that we’ll regret later! Thanks so much for any/all advice!

I’ve attached more photos of what the stains look like.

The easiest thing to do to see if it might be iron is to take a handful of plain vitamin C tablets, put them in a thin sock, crush them up a bit, and set them on that step with the stains. See if they clear off with that. Do not let the sock sit a long time. If it is iron, it will clear nearly instantaneously.
Reactions: Snoobug and Cantabrigienne
C

Well, I tried the vitamin C tablet tonight with no luck. Any other ideas? Could this be a plaster defect / mottling? It’s more brownish yellow than gray.
Last edited: Apr 22, 2021

Hmm. Well, the pool builder has to present you with a quality product.

They should not have to acid wash this. That will take a significant amount of life of your plaster. Resist that until they expend all other options.
C

He’s saying they would only do a “very mild” acid wash that won’t impact the life of the plaster. Is that even a thing? Are there more specific questions I should be asking (such as what concentration of acid they would be using, etc.?)
Last edited: Apr 22, 2021

Cantabrigienne said:
Is that even a thing?
Click to expand...

No.
A Zero Alkalinity treatment is the least damaging of acid washes, but still will remove many years from the life of the plaster.
C

Is there some type of database for finding the type of “pool nerd” contractor or company that could give a second opinion in person? Are there known TFP experts out there that could take a look?
Last edited: Apr 22, 2021

TFPC does not have a list nor can recommend any one person.
Our online expert for plaster concerns is @onBalance . Lets see if he has any ideas for you to pursue.
O

Water running down a slope into the deep end can cause serious erosion of the finish, including discoloration.
You were told that the water marks discoloration would disappear once balancing chemicals were added. Didn't happen.
They tried some stain removers, didn't work.

Don't fall for an (inexpensive) and "mild" acid wash that will still remove some plaster, age the plaster finish, and does not guarantee that it will remove the discoloration or improve the finish.

Instead, a more effective remedy is to perform a sanding and polishing job. That procedure can provide a smooth (and non-etched) surface and finish. I think the builder should have that (more expensive) procedure done for free.

Thanks @onBalance - I’m still pretty confused about what might be causing the extensive staining all over the pool. I understand that the one spot with the puddle running into the deep end could have left marks, but now we’ve got this yellow staining covering the entire deep end floor and walls, and it’s also showing up in the spa, the steps, the tanning shelves, etc. so it’s definitely not just from running the fill hose in the shallow end. Doesn’t seem to be responding to any stain treatments. (?) Can you think of anything that would cause this on 10-day-old plaster? The pool looked perfect the first 9 days, and then these all showed up basically overnight.
Last edited: Apr 22, 2021
J

Sanding and polishing are probably the best options.

A zero alkalinity or sulfamic acid treatment might work.

If you're not going to do the sanding and polishing, I would try sulfamic acid.

If sulfamic acid doesn't work, I would possibly do a zero alkalinity treatment.