Maybe look in this valve.

When reinstalling the screws, rotate the screw slowly counterclockwise until you feel it drop into the original threads so that you do not cross-thread the screw and strip or crack the screw hole. 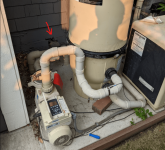 so the black piece you see looking down the return port of the pump would be the diffuser. You wouldn’t really see anything from that angle. You need to feel around the impeller which is flush against the diffuser on the inside. So feel around at the bottom opening of pot just to confirm to debris or hair is lodged inside impeller fins with tweezers.

Do you have any check valves in your system?
R

ajw22 said:
Do you have any check valves in your system?
Click to expand...

No no check Valve

Input valve to the pump looks good too

Are you sure that the filter pressure gauge is working correctly?
P

You should also check if that impeller spins freely. Maybe more friction is causing more watts which is throwing numbers off?
R

I cleaned everything and I don't think it is a flow issue. Flow may not be optimal but from the pool I am getting 50GPM-75GPM depending on RPM so I think that should be enough. When checking manually, I am getting the same pressure in the SPA that I used to have before.

I am fairly sure it is a heater issue. So what happens is the following:

1. it clicks, the gas valve opens and the ignitor does sum periodic wumm-wumm-wumm sound. I think the heater is somewhat igniting but when everything was working before, the heater used to emit a much louder and more constant burning sound and a not the periodic wumm-wumm. It gets a little warm so sth is burning and it smells of gas.
2. When I measure the fc+ and fc- pins with my multimeter it shows 300-400mV DC (don't have a true-RMS)
3. after a couple of seconds it clicks again and then the FC pins show 0V.

I double-checked the ground and added an additional wire between the control box and the burner. Everything looks perfectly clean and well. I exchanged the thermal regulator. No LEDs are on on the backside of the panel. When the heater is trying to ignite, the heating LED is blinking.

Could it be the flame sensor? Where is it and how can I clean it?

There is no flame sensor.

The flame rectification works through the igniter.

Have you replaced the igniter?

Is this a natural or propane gas system?
R

It turned out to be a gas problem. I have no idea how it happened but apparently the manual gas valve was not 100% open. I only figured it out because we had a small gas leak and had the utility provider coming to fix it.

Thank you so much everyone I learned a lot and now feel fully capable of maintaining my pool!