Jump to latest Follow Reply
You are using an out of date browser. It may not display this or other websites correctly.
You should upgrade or use an alternative browser.
F

Here's my prior thread just telling how I got here:

I just moved into this house and have been working on the pool. After ordering a new heater in Feb, it was finally installed this past week (Jandy Jxi400). I have an old Hayward pump that I have set to go on from 9p-9a with an Intermatic mechanical switch and a Starite System 3 cartridge filter...

Now:
Ok thanks all. Wound up upgrading to the Hayward Omnilogic system for all in ~2500. Everything is now able to be controlled by my phone and from what I understood about the system, it's also relatively futureproof as my existing pool equipment gets replaced over time.

But there's a problem. I tested my chems yesterday, granted after an extremely rainy day, and my FC was practically 0. Since it was late evening and the pump just turned on, I tried again an hour or so later and it was still 0. When I opened the SWG control panel:
Power light: green
Aqualink RS: Green
No Flow: Red

I saw that the flow sensor is now plugged into the Hayward Omnilogic instead of the SWG. I left it running overnight with the SWG turned up to 70%. This morning, same, minimal FC.

You say flow sensor is plugged into the Omnilogic.

Where is the T cell wire connected to? The Omnilogic or your old Aquarite panel?
F

ajw22 said:
You say flow sensor is plugged into the Omnilogic.

Where is the T cell wire connected to? The Omnilogic or your old Aquarite panel?
Click to expand...

T-cell is connected to the aquarite panel.

f30er said:
T-cell is connected to the aquarite panel.
Click to expand...

Not sure how your installer wired things but I think the cell wiring should have been moved to the Omnilogic board and the Aquarite panel removed.

Ok I opened up the Omnilogic, there's no place in there to plug in the cell. I did move the Flow sensor from the Omnilogic back to the SWG which fixed the flow light, but then the Omnilogic kept giving me an error for the flow sensor. Disabled the flow sensor in the settings, but still no Generating light. I dumped in a couple gallons of LC just till I can get the peeps that installed it to come over and check it out.

Your OmniLogic board should look like this and the cell should plug into K.

If you don't have this board post a pic of what you have. 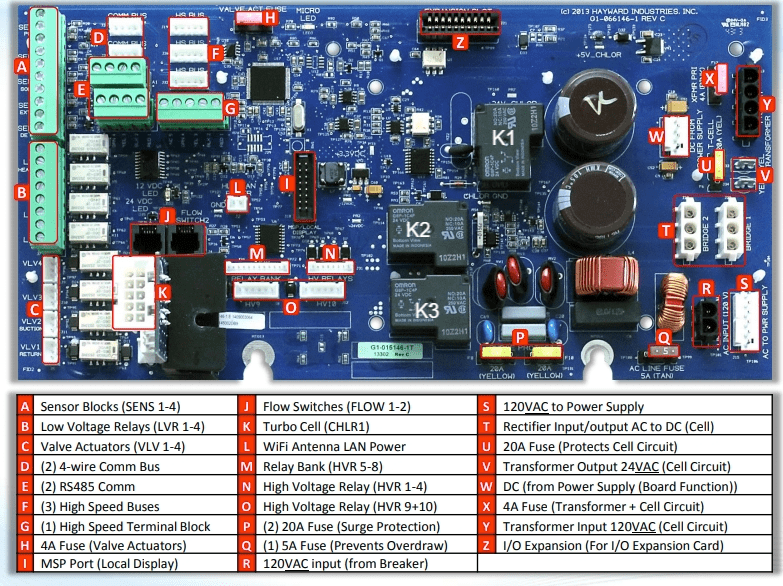 Looks completely different to me

That is not an OmniLogic system.

What do the labels on the cover show?
F

The Installation Manual is at https://www.hayward-pool.com/assets...ls/OmniHub_InstallationManual_092711_RevD.pdf

Optional Aqua Rite Salt Chlorination
The OmniHub can control an Aqua Rite chlorinator and generate chlorine based on the pool's ORP level (using HL-CHEM) or as a percentage of run time, producing small amounts periodically throughout the day. The standard Aqua Rite requires an HLAQRPCB communication board (sold separately) and connects to the OmniHub in the same manner as a Smart Relay. The HLAQR940 bundle (OmniHub + AQR940 Aqua Rite) contains the HLAQRPCB kit which can be used with minor assembly (see instructions included with the bundle).

You need the HLAQRPCB communication board to connect your Aquarite panel to the Omnihub.

Did your installer do that?
You must log in or register to reply here.
Thread Status
Hello , This is an inactive thread. Any new postings here are unlikely to be seen or responded to by other members. You will get much more visibility by Starting A New Thread

Everything Else May 11, 2022
mgshapiro7
M
J
Does the Hayward OmniPL upgrade work with EcoStar Pumps?