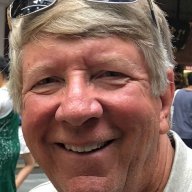 HELP! I Turned my heater on to get up a few degrees for a pool party and noticed no hot water coming out. Found that the heater did come on properly, but then after 10-15 seconds it turned off ("Heating" light goes out and so does flame). All burners do work for a while. I can then restart the heater, but it again lasts only a few seconds. Any ideas?

Is the heater displaying any codes?

The unit does not have a display for codes. And I can't find any documentation about this particular unit. There's no blower or pilot light (has electronic ignition). I've looked at the schematics for other H series and it seems like the problem would be one of the limit switches since it fires up great and hot water flows to the pool - for a short time before it shuts down! I assume all these sensors must be under the side panels but I can't find any docs that show me the location of the switches.
Then to diagnose just which one is causing the shutdown, can I just jumper around each one until I find the offender with process of elimination? 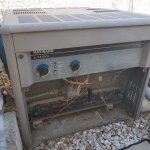 This should be your manual....

Consider that maybe the safety sensors are doing their job and your old heater is overheating internally. Jumping the sensors may cause safety issues if you don't know what you are doing to monitor the heater.

Sounds like it is not sensing flame and shutting down.
F

That looks like my old heater! Could be your flow switch (had a tech come out to replace mine in ~2006), not sure what else they did. I replaced mine with a mastertemp400 back in 2010, wasn't too hard. Newer will be more efficient.

1poolman1 is correct in that the most likely cause is the flame not being sensed. It appears that your heater is direct spark ignition ( main burners light off from a generated spark with no pilot ). It may be something as simple as pulling and cleaning the spark ignitor/electrode attached to the burner assembly on the lower left (single wire) and associated grounds. Since it does not use a gray box Fenwal ignition module with a label stating operating parameters it is difficult to tell the exact timing for trial for ignition ( time from when the gas valve is powered until the circuit board makes a go/no go decision based on whether the main burner flame is sensed or not). It could be about 10 sec give or take? Please note that not having the heater cleaned on a regular basis can cause problems that can snowball into much larger problems. I know that getting a competent service tech to work on a "pool heater" can be a very hit and miss situation. At a minimum, burner assembly should be pulled and spark ignitor/elctrode, burners and orifices should be checked/cleaned and heat exchanger visually checked above and below for any obstructions to insure safe/efficient operation.

I pulled & cleaned the igniter and all the orifices, problem remains. I believe you may be right about the flame sensor but I'm not sure of where it is! Is this thing at the bottom right of the photo the flame sensor (I believe I've seen it labelled "Temperature Limiter")? For testing, can I disconnect it and insert a jumper there to see if works? My ohm meter says it's open now with no flames, what values should I see from it 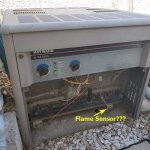 Yes, I already cleaned the igniter, but that had nothing to do with my problem since it does ignite the gas promptly every time. The problem is that the gas shuts down after 10 seconds, long after the igniter does its role. But it's now PROBLEM SOLVED!

Something in the works was either saying "there's no flame" or "there's excessive heat" and shuts it all down. Since I got hot water while it runs, I know nothings really wrong, just mis-reported.
There are 5 limiters in the circuit (and one of them is a manual reset). Actually, my wiring is slightly different than this diagram, but the same effect. I Decided to jumper over all 5 limiters and see what happens: IT RAN for several minutes before I shut it off! Then I narrowed the jumpering down to the one that is the problem: the one Temperature Limiter switch that I referred to in the picture a couple posts back. Right after I shut the thing down, I checked the resistance on the limiters: All were closed except that one was showing open. Everything ran well without that one switch in circuit. Interestingly, after a couple more system tests, I checked that switch again and it was CLOSED! Just a fluke? Now I know that if it fails again, I'll know to replace that switch. Thanks to all that helped me understand what's going on here! 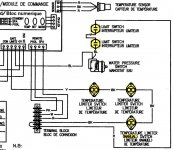 T
Raypak 406a-en-x Heater shuts off after an hour