I put on my solar cover this week which I inherited with the house. It was not trimmed so I trimmed it down a bit. Then it rained this week and my Oak? maybe maple trees decided to drop all of their little seed pods into the pool and everywhere around here. I was able to use a brush to sweep off the majority of those but the cover happily dumped a bunch of green water in the pool (probably algae). So the question is - how do you keep from making a giant mess with the solar cover? It seems to be an inevitable cycle of rain, standing water, algae growth, then dumping said algae water into the pool. Should I cut holes in the cover so all the rain can drain through?

Also when pulling the solar cover out I attempted the fan fold system but it got very dirty in the process. Also once the cover was out it was so wet I wasn't able to move it so now it's sitting outside through our 2" rain storm.

I'd love to use it, but right now it looks like more hassle than it's worth (5 degrees of trapped heat). Any suggestions or techniques? I was thinking about getting the solar roller. Maybe I can store the solar cover actually on the surface of the pool water when the pool is in use.
R

I definitely think a solar cover it worth using. Mine came with a reel, fortunately, or it would be unbearable (due to the size of my pool).

I remember a member here posting a link to a "how-to" on cutting your solar cover into strips to make it easier to handle without a reel. I remember thinking it looked really slick.

I tried to locate it, but unfortunately phpBB search feature can, at times, be about as helpful as a poke in the eye.

Perhaps someone knows what I'm talking about and can repost that.
K

Look at it this way, without the cover ALL of that stuff would be in the pool directly. So, the little that you could not sweep off or blow off it no big deal. A reel is a must have for a cover of any size.
M

I hope to get a reel this year, but I have been using a solar cover for 7 years without one. I usually remove the cover from inside the pool and last person out (usually me) puts it back on. I have done it from outside the pool but it is way more of a pain.

Here are the two folding methods that have worked for me in my round AG pool:

First one works for a lighter cover without the diamond shape bubbles. I start at one end folding it over about a foot... continuously folding until I get to the middle. Then I switch sides and fold until my folds meet in the middle. Then I go from the side and folder over about 2 feet... takes about 2-3 fold to get to the middle. Then I switch and repeat on the other side. This results in a cube-like shape about 2x2 wide floating on the pool. I push it to the edge where the deck is so the fold side is facing the deck, and then I can lean on it and push the fold side up on to the deck, then flip the other end up and over so now the fold is facing me in the pool. When it's time to put it back in I can grab that folded edge and drag it in and unfold.

With the diamond bubble cover, I can use that method, but it is a little trickier because you can only fold along the lines that the bubbles create. and the cube ends up a lot bulkier after folding.

I find it easier and faster to roll the diamond cover. I start at one end, fold over about 2 feet. Then from the fold I start rolling and it rolls up pretty quickly as long as I don't have a ton of pine needles to clear off it like I did today. Once it's rolled, I take one end and flip it over the edge of the pool so about 3 feet is hanging over, then flip the other end over the same way, and leave the middle hanging in the pool. It cuts into the pool space a bit but we usually don't have guests so it's fine like that. (My deck isn't wide enough to put the full length of it on the deck.)

I clear off the big chunks of crud as I go, but don't sweat the small stuff... because, like the person above said, it would have gone directly in the pool without the cover anyway.

Having written all that... I have seen the other member's innovation that robrinker is referring to and that would probably work well for your size pool. Hopefully that person will see this thread and post the link. 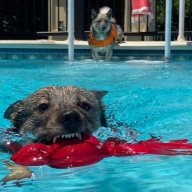 robrinker said:
I remember a member here posting a link to a "how-to" on cutting your solar cover into strips to make it easier to handle without a reel. I remember thinking it looked really slick.
Click to expand...

That would be me. The link is here.

ETA: We've done away with the styrofoam balls. The nylon hose bags we had made for them didn't hold up well and crumbled. Turns out you really don't need the balls, anyway. Once the solar cover section is on the water it sticks to it and you can easily push it in place with the pole.

Thanks for the suggestions. I've cut the cover into 4 individual pieces and can now manage it even when it's wet. Also the trees have finally finished dropping their load of seeds with our current wind storm so after I clean the debris off the cover tonight I'll probably be fine. I had the cover on and my temp was 70. Took it off and a day later it was 62. I'm convinced.

If you don't have the cash or want to spend the cash to buy a reel, you can make one. The basic design is the same whether IG or AG except that the supports are higher up for AG. We have an 18X33 and that cover is a monster without the reel. Ours works great and is a one person operation. Check out Matt4x4 posts and you will see his design, the supports are mounted lower for IG
You must log in or register to reply here.
Share:
Facebook Reddit Pinterest Tumblr WhatsApp Email Link

New to this process. My husband typically handles this.