onBalance said:
Gray (also spelled “grey”) or darkened blotchy or streaky discoloration of pool plaster (cement flatwork) is known to be caused by several improper plastering practices, including the addition of calcium chloride to the mix (even less than 2%), late hard or dry troweling, and sometimes a cement material issue can lead to this problem. Trowel “burn” is another cause of extreme dark discolorations of white plaster. It is also called “pinto concrete” in the cement industry. (Concrete Slab Surface Defects: Causes, Prevention, Repair Portland Cement Association 2001).

Although some discolorations are the result of metals precipitating and depositing various color residues onto the plaster surface, these are referred to as surface staining. Usually, this type of staining can be easily and safely removed from the surface by acid washing, sanding, using sequestering or chelating chemicals, or other stain removal products.

For this article, we are discussing a blotchy or streaky, and very smooth gray discoloration that sometimes develops during the first few months after plastering and being filled with water. This graying discoloration is difficult to remove, and is often termed as a “hydration problem” or “entrapped moisture.” This type of dark discoloration should not be confused with metal or calcium scale staining. 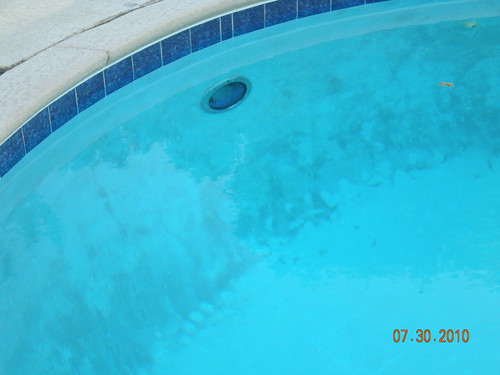 Gray mottling of new plaster pools is sometimes accompanied with “white soft spots” or streaking (also incorrectly called “spot etching” or “etching deterioration” by plasterers). Research by independent cement laboratories have documented that white spotting and streaking is not the result of an aggressive water (etched caused) condition, but is caused by improper workmanship practices and troweling techniques (such as adding lots of water while troweling) which results in localize areas of greater porosity (lighter soft areas or spots) on the plaster surface.

In an attempt to remove the smooth gray discoloration, it is sometimes suggested to perform a “zero alkalinity process” or an acid treatment on the plaster. That is the wrong thing to do. Acidic water treatments are an undesirable and improper suggestion for the service tech or pool owner to perform on a new plaster job. While this treatment may occasionally lighten gray discolorations, it often doesn’t work, or the gray color returns within weeks afterwards. But the most unfortunate issue is that the plaster surface WILL BE ETCHED after the acid treatment process is performed, which ages the plaster surface and allows for staining to occur much easier and sooner.

If an acid treatment is used to lighten gray mottling, how is it that slightly aggressive water caused white plaster to darken and turn gray, and in a blotchy, streaky, or spotting fashion in the first place? If the gray discoloration isn’t removed by the acidic process; it will then become difficult proving that it wasn’t aggressive water that caused the gray discoloration in the first place and the pool plasterer may be able to avoid being held responsible.

Sometimes, “torching” (heating) the gray area with a propane torch device is performed in an attempt to remove the gray color. It is unclear whether the torching process affects the long-term durability of a plaster surface, but there are studies that indicate some damage is done to cement products. It is known that the plaster surface may “pop” when heated to such high temperatures, so protective goggles should be used. Be aware that the above remedies may only be temporary as the gray discoloration may return after the pool is filled again with water.

There is also normal mottling of plaster where the white plaster surface has very slight shade differences from one white area to another. Again, this slight difference still has to do with the fact that plaster is made of a mixture of water, cement, and aggregate, and is a hand-crafted product. At its best, there will still be a slight variation.

As one can see, all of the above discussions regarding dark discolorations of white plaster has to do with workmanship, additives, hydration problems, and/or curing issues, not about water chemistry and whether the water is aggressive or not. Aggressive pool water does not cause a darkening of white cement, nor does it detrimentally affect the hydration rate of the cement compounds.

This exactly describes my problem. Would anyone know what the best steps are to get someone to write a report about that. It sounds obvious to get a pool guy out but not every pool guy recognises the problem.

What do you want to accomplish?
You must log in or register to reply here.
Thread Status
Hello , This is an inactive thread. Any new postings here are unlikely to be seen or responded to by other members. You will get much more visibility by Starting A New Thread

B
Mottling in New Pool

My white pool plaster turns grey or off white when wet.