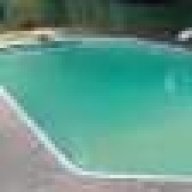 I felt in my other post my pool out shined my frog problem, so I decided to dedicate a post just to them. I have a swamp instead of a pool and with it, a frog problem. We started treating our swamp hoping to turn it back into a pool. In the process we have removed dozens upon dozens of tadpoles and frogs. Once we started putting chemicals in the pool the tadpoles died fairly quickly, along with a few small frogs. So far it seems we have removed all the dead ones. Now our problem with the live ones. Our backyard sounded like a jungle and I thought there were a million frogs out there croaking. We went night "fishing" for frogs with the kids and removed 23 frogs of various sizes, and one very large toad. We have no place to relocate them to (pond, creek, ect) so the kids started throwing them in the neighbors yard. Not going to help us a lot but they had fun. Next we got around to cutting the tree branches back, so they did not hang over the pool anymore. We had 3 days of quiet and no frogs in the pool. Then bam they are back swimming in our pool, and these buggers are quick, we have not been able to catch a single one. From what I can tell we had 3 or 4 last night and this morning I am pretty sure that number increased to 5 or 6. Anyone have any suggestion on how to get them out and keep them out?
T

I can't tell if it's permanent yet or not, but we had 5-6 frogs living in and around our pool since it was build last year (they love to hid under the ledges of our waterfall) but since I added 50ppm of Borates 5 days ago, the frogs have disappeared. I did find 2 dead ones in the skimmer a couple days after adding the borates, but otherwise the rest seem to have gone away.

Again, I don't know if the borates will keep them away permanently or not, but it seemed to have sent them packing for now at least.

It will likely get better in future seasons. I recovered a swamp in spring of 2012. The first year I couldn't keep the frogs away at all, as they seemed imprinted to the swamp. Lotsa frog-flipping that year I had added 50 ppm borates that first year.

Second year, fewer frogs, but still some, eg may one or two little idiots in the skimmer every morning, but tey seemed to learn to stay away when we were about.

In 2014 and 2015, could go days at a time without them in the skimmer, but still at least a weekly occurrence. At night I try to remember to put the skimmer pole in the stairs so they have a way out. There is a frog ladder you can buy, but I never got around to it.

This morning, had a dead one in my actual pump basket somehow...that must have been quite an end-of-life adventure between the line and the impeller.

So if you have frogs near you, you a ever be frog free, but if the swamp was the so breeding ground I predict the population will dwindle. I am near a river, so in my case, I'd have them, swam or no.
G

I was looking into a product sold by wayfair. Some type of wire mesh that goes on your fence to keep the frogs out of the yard. You may want to consider it.
You must log in or register to reply here.
Share:
Facebook Reddit Pinterest Tumblr WhatsApp Email Link

Frog Products: As if selling you a bill of goods wasn't enough....