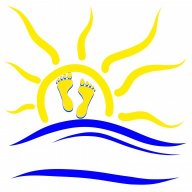 2 years ago I asked a question about reels for a 30' diameter pool, and what reels others were using. I ended up cutting my "old" solar cover into 6 lengths, and would roll each length up and set them out of the pool when we wanted to swim. That was a major pain, but we put up with it for 2 seasons.

Prior to cutting the cover, I had an Odyssey reel that worked great for 16 or 17 seasons, but it finally snapped in the center, and I couldn't find replacement tubes for that setup, as Odyssey had stopped making that reel.

This year I got fed up, and decided to build my own, based on the "Aqua Splash" reel system. I ordered a reel system for a 28' pool, and after assembling it, and stretching out a reel intended for 28 feet, to cover the 32' final pole length needed for my 30' pool, it ended up sagging A LOT in the center. Using the setup that I bought, only allowed for roughly 7" of splice joints between each 94" long tube. Aqua Splash is made by a company named Horizon Ventures, from the Chicago area. I ended up contacting the company, and explained my situation, and asked if I could purchase some additional tubes. They were reluctant at firsts, and passed me on to a manager, and I told him why I needed the extra tubes, and that I understood there wouldn't be a warranty claim IF the tube failed. After he heard that, he was ready to sell me the tubes I needed.

I ended up getting the tubes last Saturday, and promptly started working on getting the reel assembled. I don't connect the bases to the top rail of the pool, but rather to 4" x 4" posts outside of the pool, so the overall length of the combined reel tubes was 32' 0-1/2" long. I ended up with splice joint coverage of roughly 91" on each 94" tube, meaning the tube is roughly a double tube the entire length, with the exception of the last 42" at each end, resulting in a heavier tube, but also a much sturdier tube. It still sags in the center, but no where near what it did with the original reel for the 28' pool.

In the pictures the cover isn't yet attached to the reel, as the water was just a little too cold for me to get in and make the final attachments, that should happen this evening!

If we can get another 16-17 years out of this reel, like we did with the old Odyssey reel, then it was worth the extra $420 I had to spend to get the 3 extra tubes.

Well done! I can see how that would be nice to have!
Reactions: BarefootRob
You must log in or register to reply here.
Thread Status
Hello , This is an inactive thread. Any new postings here are unlikely to be seen or responded to by other members. You will get much more visibility by Starting A New Thread