I had a pool guy since buying my house, the pool never looked amazing, but this year it has been really bad and in recent weeks the pool just turns green a couple of days after he visits, and every week I'm charged extra for algae treatments.

This week was the worst yet, so I asked him what was going on.

He said that the pool was showing zero conditioner and so the chlorine wasn't lasting long, I needed to add conditioner. Earlier this summer he said the same thing, so I already added pounds of Clorox stabilizer to the pool at his direction.

I therefore found his comments very hard to believe so I went and bought some test strips and saw the pool was showing about 75-100 ppm for stabilizer, which if anything is too high, but certainly not zero. I told him this, and he said it was because he shocked the pool and the level would return to zero shortly. For CYA? That's now how it works, right? He also said that I added stabilizer and not conditioner which is different, and he was measuring conditioner at zero. He sent me an image of a product to buy on Amazon. But the product he sent was just 100% cyanuric acid, which was the exact same thing as I already added just with a different name. I don't think stabilizer breaks down in the sun which is what he told me, and frankly, I thought he was just making excuses. I also noticed that the pool had zero chlorine tabs, and in previous weeks when I checked there were only ever one or two tabs and they never lasted a full week.

I confronted him with all this, and he said there is a chlorine shortage and so he added liquid chlorine. I asked him to clarify what reading he saw zero at because I cannot see what difference there is between conditioner and stabilizer given that the ingredients are the same and the terms seem interchangeable. No response.

Basically, I think he has not had chlorine tabs and instead of just telling me, he is saying the pool lacks CYA and so the chlorine is not lasting. I think he has been rationing the tabs (I only ever see one or two and I have around a 25k gallon pool) and recently he is using liquid chlorine. My understanding is that liquid chlorine is fine, but I need to add this more than once a week and keep track of the levels because the chlorine won't last as long as it will with tabs. He doesn't come more than once a week, so it won't work. I live in a hot part of LA where it's in the 90s every day, the sun is on my pool all day.

I therefore fired him because no matter what, I cannot just live with a pool that only looks good three days a week and turns green by the time he returns.

I am now armed with a few gallons of liquid chlorine, some test strips, and I don't know what I'm doing! There is no chlorine tabs around here.

Basically, can someone tell me if my assumptions about stabilizer and me being told incorrect things are true? I just want to know if I'm not missing something here and might have wider issues to deal with other than keeping the chlorine at the right levels. The other results on the test strip are mostly in line, the water hardness is high but everything else is looking within range (chlorine was at literally zero so I added more). I am also worried because I read about chlorine lock and I am concerned that because of what he told me to do, I may have even added too much stabilizer!

While you are waiting on your test kit, add 5 ppm FC worth of liquid chlorine / plain bleach to your pool each evening with the pump running. This will replenish the FC lost each day to the sun and also inhibit any algae in the water from growing further.
I suggest you read ABC's of Pool Water Chemistry.

Hi, welcome to TFP! First thing I would do is get one of the recommended test kits, such as what Marty listed above. You are right that CYA, stabilizer, and conditioner are all the same thing. I don't know if your pool guy honestly didn't know this or if he was just blowing smoke because he can't get tablets. Irregardless, you probably do have too much CYA in the water and the only way to get rid of it is to drain and replace water. How much water you need to drain will depend on how high the CYA level is now, so a good test kit is essential. Once you have your test kit we can help you take control of your pool and it will look great every day. Please feel free to ask any questions you may have and we will do our best to answer. Switching to liquid chlorine is one of the best things you can do to manage your pool.

Could you please edit your signature to tell us more about your pool? That will help us answer your questions without having to ask over and over.
D

Just for some encouragement;

It honestly sounds like you already have a grasp on the basics and will do very well managing the pool yourself. Good work taking charge!
Reactions: Bperry
K

Thanks for the advice, really helpful. I will buy the better test kit as all I have now are those dip stick things, add chlorine to the water and test each day and report back once I can give more accurate readings! I feel bad for the pool guy if he cannot get hold of chemicals, but the more I look into it, the more I realize he should have just been honest with me so I wasn't making my pool even worse.
Reactions: GrandizerGo, Bperry, Danimal92Sport and 1 other person
R 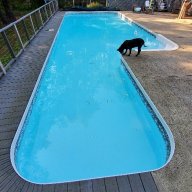 Just Getting Started May 31, 2021
LoneWolfArcher

Just Getting Started Aug 30, 2021
HKBob
H
M
Too much liquid chlorine and too little maintenance?