Fed up with the Polaris 380 so now what?

Jump to latest Follow Reply
You are using an out of date browser. It may not display this or other websites correctly.
You should upgrade or use an alternative browser.
Z

Here's my friend Sweepie in his natural state: 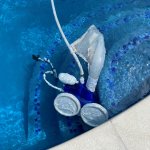 The curve of the pool and steps seem perfectly designed to trick him.

In the five years we've been friends he's had his entire hose replaced, his backup valve replaced, his guts replaced via a rebuild kit, his bag replaced, and he's been adjusted many, many times. Hours of our time together, me turning the valve a little, or a lot, adjusting the tail flow, the float position, watching, repeating. And yes, everything will be just right for a moment and he'll take the curve leading into the steps like a boss and we'll celebrate together, but then: get some leaves in that bag, or an insect in the little hose screen, or a full moon overhead, and he starts getting instantly, endlessly trapped again.

This was our silly game together riding out 25 year old plaster, but now with brand new plaster I don't want him grinding a hole in his same old spot. The picture is him failing his test run with the new plumbing, with a new wall spot, ... So! Would a four wheeled pressure-side cleaner NOT do this? Has anyone had success with this pool shape? Is everyone gonna try to convince me to go robotic?

It's not a big pool and it doesn't get very much waste. Some pine needles and an occasional leaf or two blow in - it's not a big job, just ... Sweepie can't handle it. It's over, bro.

Thanks for any recommendations!

You might have better luck with a Quattro. The 380's wheels only go forward, and it relies on a working backup valve to pull it out of stuck positions. Does Sweepie have a working backup?

The 4-wheeled Quattro does not have a backup valve; its internal mechanism causes the wheels to periodically reverse to change direction. That might work better in your pool, but you won't know until you try. I have even seen reports of Polaris advising users to splice a backup valve into the Quattro's hose to double the randomness.

I had a 280, and I won't bore you with the details of its ineptitude, but like you, I'd grown weary of dealing with it. I had my pressure port converted to suction port (some simple re-plumbing at the pad) and all problems are solved. Plus, I was able to rid myself of the booster pump! No more collection bag (debris goes to the pump basket instead, which is much easier to clean out), no more spraying tail, and no more getting stuck.

I doubt my Pentair Rebel scrubs as well as a robot, but like yours, my pool is relatively clean and doesn't need much help. I can leave my vac in the water 24/365, and it's much easier to lift out than a robot would be when I want to (parties and such). And while it has a hose, which doesn't bother me, there's no cord on the deck, which would.

It's got only two wheels, and periodically they travel in opposite directions, so it can change course, including rotating itself out of any stuck spots.

Suction side vacs don't get the respect here that robots do, but I like mine just fine.
B

My 380 would do the same. Now the robot never gets stuck, never sprays my windows with a tail, never sits in one spot doing nothing, never gets it’s cord tangled, doesn’t emit loud noise from its booster pump, and always just does what it’s supposed to do when I push a button. It’s a very different relationship. And I got $100 for the 20 year old booster pump and 380.
D

I have the same problem with rounded step corners with my Kreepy Krualy Legend. You might want to find a local pool store that will let you test drive a robot. I'm currently doing that with a Dolphin 300i. It's been very enlightening watching and experiencing the pro and cons of the robot.
Z

I didn't mention but we keep a security net cinched on the top, so cleaner has to stay in to be used regularly.

Yes to working backup valve. Replacing the broken original was one of my early "this oughta do it" attempts!

Discouraging that the Kreepy Krauly Legend does similar; I had the idea that the 380's asymmetric wheels were allowing the nose to get buried just right, where nose resistance exceeded wheel traction. I can see how it would be more it getting into a position where the jet thrust is just holding it regardless.

which I see expressed here sometimes, but it's sometimes unclear if the person has owned it, let alone consider all the general differences: maybe their pool is a huge rectangle, with a high debris load ... it seems like every little thing influences pressure-side cleaners!

Quattro owners, is it ... fickle? Or dump it in there and it mostly just works? I'll read through past posts here shortly.

Hadn't considered switching to suction. More reading to do there too.

zoonews said:
Hadn't considered switching to suction. More reading to do there too.
Click to expand...

I doubt it's a common thing to do, but it can work. Just wanted to point out that you have more choices than just robot or pressure...
You must log in or register to reply here.
Thread Status
Hello , This is an inactive thread. Any new postings here are unlikely to be seen or responded to by other members. You will get much more visibility by Starting A New Thread

A
Buying a Polaris online?

What are the odds of getting algae with FC of 1-2 in a salt water pool?

So I have two Maytronics Robots now....