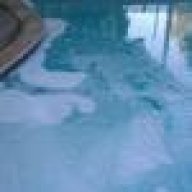 In June, I replastered, and replaced all of our existing equipment except our heater. Around that same time, I found this site, and finally understood why the previous 4 years of pool ownership had been so tiresome. (Replacing superstition with facts is a lovely thing.) My initial post http://www.troublefreepool.com/spectralight-ecopump-zeosand-new-plaster-etc-t35659.html recorded my setup. I felt that in the interest of following up, I should report on how the first season went with the new equipment while following BBB.

In years past, I was flying blind, "guided" by the SALES staff at Leslie's. Typically, the pattern was: Plan BBQ party for Saturday. Water mysteriously turn milky Friday. Panic. Shock and Awww.. Run pump overnight, and hope the water was passable in time for guests. Repeat process. Also, aside from lots of shock bags, don't forget algaecide, flocculant, and whatever else was recommended or on sale that week. I had no understanding of water chemistry; hearsay and anecdote guided my actions.

Thus, in June, I started anew. I went with what seemed at the time to be the best equipment; my hope was to have a steady state system, simple to operate and maintain. So, after the break in period (new plaster being very labor intensive, I hired a service to do the break-in), I fired the pool service and took over myself. Immediately, I had problems- the pool service had bumped my CYA to 80. ("We like to keep our residentials around 80.") So partial drain and refill to bring it down a bit. Then I added borates and salt for water feel. Then I read this http://www.google.com/url?sa=t&sour...-MyzAg&usg=AFQjCNFvZElxM3PV_XKo3KHPDqBesZEnXg, which seemed to make fairly compelling arguments against salt. So, another running drain and refill to get rid of the salt I'd added, as I didn't want my coping to melt. After which I re-borated, and overshot the mark, going up to 80ppm. Figuring that there was no difference between 50 and 80, I left it there.

Meanwhile, my test numbers showed a few consistencies. First, new plaster runs a really high CH- 425, to be exact, even after refilling. It will eventually come down, but for now, I live with it. Second, my pH drifts up- from 7.4 to >8.0 over one week, on average, requiring up to a gallon of 31.45% at a time to bring it back down.
Third, TA started high- in June I was getting 160 at baseline. This, obviously, would drop with acid addition, but rise again in step with pH rise. It has since drifted down- yesterday it was 130, adjusted down to 110 after acid was added. (The kids splashing must help.) Fourth, chlorine. After the refill, my CYA initially tested at about 45 (it was a running refill- drain and fill simultaneously, so as not to expose the new plaster to air; thus not all the water was replaced.) It has since drifted down to <30 (approx. 28 or so). Thus, my chlorine will be depleted after 2-3 days. I usually adjust it up to 5ppm; I need to add some more CYA, and get it to about 40. No particular hurry on that, either.

From those numbers, I should be at risk for scaling. My CSI has been as high as .33, it now runs about a .22. (San Jose, CA. tap water has a CH of 160, so we run hard to start with.) Additionally, I should be dealing with algae, as I am working major overtime right now, and sometimes only get to test and adjust once a week.

Thankfully, none of this has occurred.

From June onwards, the pool water has been pristine. (It passes the screw head test- I can see the screw heads (flat) on the drain cover at 8 feet). Twice, after heavy pool parties, I have had a slight haze to the water; by morning, though, it was gone, with no intervention on my part. Subjectively, my pool is now a source of pleasure- on Saturdays, I test, adjust, brush, and empty the skimmer basket and polaris bag; beyond that, nothing. I test during the week if I can; midweek, I'll add a liter of 12% chlorine prophylactically, if I don't have time to test.

Factors-
BBB- Knowledge is power. (i.e., "Know the rules before you break them".)

Equipment-
Zeosand and Pentair filter- Initially, I wasn't impressed. During break in, we still had dust issues. Since, then, though, I am quite happy with my filtration- the results of the pool light test are better than when I was running DE. The Pentair runs about 3 p.s.i. on low, 27 p.s.I. on high. I've backwashed it once since break-in.

Eco-Pump- Uses the AO Smith B2983, which is apparently http://www.troublefreepool.com/need-help-for-motor-or-pump-replacement-t36215.html the most efficient two speed made, right now. Runs 24/7. Powers the 360 nicely on high. 53 Decibels on low at 3 feet. My power consumption is down from the previous 12H a day 1 speed. No more booster pump.

Spectralight- The source of much debate- "you've been pool stored", "unnecessary on a residential pool"-, etc. I cannot say how effective it has been, as I have yet to do a side by side (one week with it on, one week with it off) to compare its effect. However, I suspect as a back-up sanitizer, it has helped me along quite a bit. As for the "bacteria and algae breed faster than the unit can handle" argument, true, but only under optimal conditions. They (bacteria and algae) rarely get those conditions.

GE timer 15087- Extremely simple, although not to install. Once set up, though, it has been reliable. I like the electromechanical design. (No LCD screens to die.)

Polaris 360- I felt the Polaris 280 was an excellent pool cleaner. In replacing it with the 360, I have been happy to find that the 360 does as good a job, without a booster. I run it 1 hour a day, and it keeps the bottom free of debris. It climbs the walls nicely at 30 rpm. No problems yet.

RayPak 2100- This unit was here when we bought the house. In keeping the pool at 82 degrees, it uses a large amount of natural gas. In essence, it costs as much to heat the pool in summer as it does to heat the house in winter. Solar would be nice; next year perhaps.

Summary- My maintenance costs in time and money are much lower than in previous years- $30 a month for chlorine and acid. I use no algaecide, flocculant, or shock. My time- approximately 1 hour a week. Electricity usage is down. Natural gas usage is the same.
Our pool use is the highest it has ever been in 5 years- the pool is always ready to go. The water feel is excellent- no odor, no eye stinging, smooth skin. Clarity is excellent- the water sparkles. The simplicity of the system is extremely appealing- there's not much to do, but swim.

Re: End of season thoughts and commentary.....

Very nice work! the Polaris looks suspended your water is so clear. That's about as compelling as a testimonial can get and reminds us all just how empowering it is to have the knowledge we all share. :lol:

Thanks.. although it is, suspended, that is. ( You know how Polarii (?) tend to float.) But yes; I feel very happy with this year's results. TFP is a wonderful resource.

Scale on one end of pool only