<Posted elsewhere but got the message that the thread was inactive, so summarizing here>

I had the 12A breaker pop on my EasyTouch that uses an IC40. The pool maintenance guys said it was a bad breaker, so I dutifully replaced it only to have the same problem. I tracked down the problem to the Surge board (521593). It turns out that there are two functions for this board:

1. Protect the communication lines between the controller and chlorinator from electrical surges. This is done using clamping diodes and is normally non-destructive, but sometimes the diodes are overloaded and fail. (Some pictures in this forum of this kind of failure).

2. Rectify the 24VAC from the transformer through a full-wave bridge rectifier to get ~32VDC for the IC40.

In my case the rectifier has failed with a direct short from one AC leg to the Positive voltage terminal. I only hope the IC 40 was not damaged.

I don't know if the unit is still under warranty, but if not I'll replace the component on the board with a heavier duty bridge (25A instead of 12.5A). The component cost is literally $4.00. An entirely new board is $250. I'm an electrical engineer and have dealt with similar systems before. The most common issue is failure due to exceeding current specs, and the component is chosen for lowest cost.

So, just wondering if anyone else has tried this? I'll let everyone know how it goes, but I have to say that it seems that for this failure the fix can be a lot cheaper 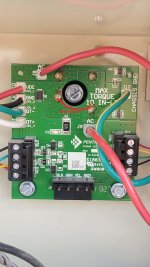 than what I've been reading about.

Recently there was this thread asking what the difference is between the surge board in the Power Center and in the IntelliCenter as they are different designs.

The board in the Power Center looks to be a more robust design with what I think are multiple rectifiers attached to a heat sink.

Then the surge board in the IntelliCenter...

When I was working with a Pool Guy helping me install my IntelliCenter we removed my Power Center box. He remarked that he sees the Power Center box blowing fuses that are cheap to replace while the surge boards in the Pentair automation panels self destruct and are expensive to replace.
Last edited: Jul 31, 2022
R

I ordered a bridge rectifier to replace the failed one and it works fine (yes, it was out of warranty). I found that the specs for the original rectifier were 25A max, 100v reverse, and 125C operating temp. The replacement is a 35A, 200V, 150C device. I suspect the failure of the original came from overtemp operation over a prolonged time. As part of installing the new device I also applied thermal transfer paste to the heatsink of the rectifier, and scraped off the paint in the cabinet where it contacts for a better thermal seal so the entire cabinet can act as a heat spreader.

The original rectifier is a MB251W and the device I used is a GBPC3502W. They can be found at Mouser.com or Digikey.com.

So, bottom line is I spent $4 + $8 shipping for a replacement. Even if you have to buy a higher power soldering iron and "solder sucker" to do the repair, you'll still come out way ahead. I'm happy to post an instructional video if anyone needs it; really it's not a difficult fix.

Since the Surge board has such numerous failures, it's clearly a marginal design. Pentair has clearly revised the original design from using diodes for overvoltage to now using Varistors, which is a step forward. I do not know whether they've increased the design margin on the rectifier on the newer units. Regardless, this failure seen in such magnitude is clearly a design problem and Pentair should be getting it fixed. $275 for a replacement board with this capability is ridiculous.

I certainly see why the Power Center board might be more reliable, but it does not add any surge protection to the incoming serial control lines. To be clear, blowing fuses and popping breakers under normal operation is anything but acceptable design. I have not dug into their IPH issues, but suspect it's much the same sort of issues given the descriptions from everyone.

Yes, I'm being critical of their design choices here, but overall the system seems to work very well. This is really the only system failure I've had to deal with so far as pumps, filters, the chlorinator itself, and controls are all pretty good.

I am not sure where you are getting your failure info, but without knowing the number of units in the field, it is useless info.

My pull it out of my rear estimate is that in the past 5 or 6 years I have seen less than 5 failed surge cards. I could certainly be wrong, but a surge card failure is not the first thing that pops into my mind.

I do appreciate your input about the option for a quick, cheap and easy fix.

Thanks for sharing. I added your fix to the Wiki - Pentair Intellichlor ICXX SWG - Further Reading

I am sure many folks over time will appreciate a video of the repair.
Reactions: guinness
R

I am not sure where you are getting your failure info, but without knowing the number of units in the field, it is useless info.

My pull it out of my rear estimate is that in the past 5 or 6 years I have seen less than 5 failed surge cards. I could certainly be wrong, but a surge card failure is not the first thing that pops into my mind.

I do appreciate your input about the option for a quick, cheap and easy fix.

My estimate is based on two data points, and is admittedly pretty weak. The first is the pool repair and Pentair "expert" in our area who says that the surge board failure is pretty common and the likely culprit in most of his "popped breaker" events. No, I don't have any numbers. The second is the plethora of pictures on this site showing burned up surge protection and descriptions similar to my own issue. The fact that surge boards are available not just from Pentair but also on Amazon and several pool supply places leads me to believe that there a fair number of failures.

My conclusions may be wrong on this. I would certainly hope so, but I'm pretty happy that I found a $10 fix instead of a $275 fix....
Reactions: Flying Tivo, guinness, Turbo1Ton and 1 other person
S

You can add my serge board to the broken list. I purchased new parts and soldering iron to replace the part tomorrow.
S

silverfun said:
You can add my serge board to the broken list. I purchased new parts and soldering iron to replace the part tomorrow.
Click to expand...

Part changed out like in your post and it is back up and running. Part from mouser was about $5 + $6 shipping so I ordered tow of them. Helpful neighbor desoldered and resoldered new component.
T

It's this the newer board you referred to?

It appears quite different as it has a pic24F microcontroller and its own RS485 transceiver. 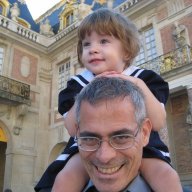 RSView said:
$275 for a replacement board with this capability is ridiculous.
Click to expand...

Amen. We had a short commiseration here recently.