For some reason I can't figure out how to program the easytouch to properly control my Intelliflo VSF. It seems like a pump gets attached to a circuit, but I can't figure out how to schedule the circuit multiple times with different flow rates. I want to do something simple like run the pump 9 hours at 25 GPM and then 15 hours at really low flow (5 GPM). I am prgramming through Screenlogic.

Happy to hear if others recommend some other control strategy too. First time pool builder and only on day 5, but want to get the pump setup right ASAP.

Here is how I suggest doing it...

1. Set your Pool Circuit for the lowest speed you ever want the pump to run. In most cases this will be what turns on the SWCG's flow switch plus 100 RPM..

2. Schedule "Pool' to be on the total amount of time you want your pump to run.

Here is an example of how it works... You can see where I have used Feature Circuits to make a circuit called "Skim Low", another one called "Skim High" and then the "Waterfall"

Below is how to assign a speed to each Circuit... 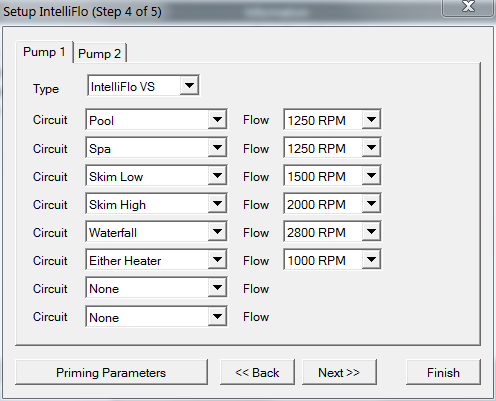 I am not a fan of GPM, but to each his own... I always suggest using RPM when you initially set up the pump.. Later, if you find you "need' GPM, then use it.. In most cases it is never needed and keeps the confusion down..

Let me know if that does not make sense.

Thanks. So you wouldn't run your pump overnight below the flow level for your chlorinator?

The program you are using looks different than mine. Is that the one developed for PBs as opposed to consumers?

The program I use is the standard one that goes on a PC.. Is it 10 times better and easier to use than the one on a phone..

If you are using a phone, you need two apps.. ScreenLogic and SLConfig...

I can't think of a single reason that I would want my pump running if I'm not making chlorine???

The only reason to run a pump is..

What do you want to accomplish by running slower???

Well as I stated am brand new to pools. Thought that some water circulating was better than none. My Chlorinator needs at least 15. Heater probably best to go about 40. So if I want to run my pump 16 hours per day, should just find RPMs to do just above 15 GPM and then when calling for heat increase that. So my chlorinator will be running the whole time. This makes sense. Do people put it up to high flow sometimes for self cleaning? Like 30 mins per day?

One of the things that I do not like about the "Flow" idea is that everyone gets hung up on GPM to accomplish some goal.. To turn on my SWCG, I might have to have more or less flow that you do to turn on your SWCG.... Instead of setting the pump to what someone wrote in a manual, I like to just adjust my pump's speed to match what actually turns my cell on.. Then I add 100 RPM so that I know if the filter gets a little dirty the cell will still work.. The same thing works for the heater... If you have a heater, your SWCG speed will be higher than mine as I don't have a heater.. The more stuff in the water path back to the pool, the faster the pump will have to run...

There is no right or wrong answer here.. Whatever works for you, is the speeds you should use.

Not sure what a "High flow" rate would do?? Self cleaning of what?

In my mind you never need to run an IntelliFlo at full speed for any reason.. Maybe if you had a spa with a bunch of jets... Other than that, you only need to run the pump at the speed you need to accomplish a goal.. (One of the three items I listed above)...

By High speed, I mean fast enough to move the water for skimming. Seems like not much circulation until I get up to higher speeds. Maybe I should shut off main drain.

I almost always recommend running with the skimmers full open and the main drain only open 5 or 10%..

If you are used to a single speed pump, it is a shock to see how little movement there is in the skimmers when using a VS pump.. Skimmers work because of the weir door and do not need the visual toilet bowel swirl you often see with a single speed pump..

I run at 1200 RPM and there is just a little water movement in my skimmers.. I initially thought they would not work and set up my Skim Low and Skim High circuits to get more skimming action. But, I found that increasing the RPM did little to make the skimming better. I use hair nets in my skimmers and they have proved to me that my skimmers work just fine at low RPMs.. They just collect a ton of junk..

I suggest that you try skimming at your SWCG speed for a day or so and see what actually happens. Forget about how the skimmers used to look with a single speed pump.. If you find that your skimmers are really not working, you can increase your SWCG speed or set up a faster speed circuit when skimming.