The Dolphin Maytronics vacuum works fine until it tries to go across the pool, when it loses power and stops. We discovered that the problem is inside the 360 degree plastic cylinder where the cord is near the unit under water. Something inside the cylinder stops making contact, then it loses power. If we lift the unit and push the cord together from both sides outside of the cylinder, the unit begins working again (until the cord tries to move away again.) Is there something we can do to fix it, or does it need to go into a shop? This is a new problem - it's always worked fine until now, and the warranty recently expired. 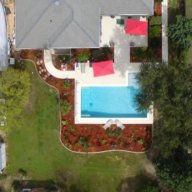 When you open the swivel connection, look at the cable side that goes to the power supply. See if the cable has pulled from the metal crimp. If it has it's just a matter of time before the swivel fill with water and/or the wires get pulled from the pins. New cable runs about $200.
Reactions: BB_Sacramento
B

We don't see how to open the swivel connection. Also, if we have to buy a new cord, does anyone know if this is something we can easily replace ourselves or do we need to take it to a repair shop to have done? Does it unplug from the unit as well as the power supply or is it hard-wired?
Last edited: Aug 27, 2020

If you need a new cord, Marina Pool Spa in Denver carries them.
Reactions: BB_Sacramento
Y

I just ordered a new cable along with a few other goodies from Marina Pool Spa. The cable for my S200 is $149 with the swivel. It is listed as a DYI cable in the description. When I asked how difficult it would be they said it’s super simple. Should be here tomorrow. My cable still works fine but it’s deteriorating a little as it’s always in the pool.
Reactions: BB_Sacramento
B

When I looked at the swivel it looks like it's sealed with some kind of product so I didn't unscrew it. Might just have to buy a new DIY cord. Thanks for all the information!
Y

Got all my parts in today. So I took apart my old swivel cord to look inside and maybe help others. Installation was really easy as Marina Pool Spa had said.

Although my cable was working fine I replaced it because it was deteriorating a little. When I took it out from the socket connection it had some moisture inside. You can see on the copper tips the slight corrosion.

I'm still having the same problem and it's worse now. As soon as the cord moves away from the power supply the Dolphin Premier stops working. If we lift the cord and push it together at the swivel it starts working again for a few minutes, then stops again and again. It feels like there is a spring inside keeping it open but when I push on the cord it makes a contact that starts the machine again. We have not opened the white plastic swivel - it seems sealed. Should we open it with pliers? I'm afraid we might make it worse if we force it open and even if we do could we fix anything inside? I am shopping for a new cord but unsure of what cord to buy! We want one that swivels but we don't use the remote control. I can't find a serial number on the machine - see my photos. I read on a thread the there is more than one cord for them and one is about $100 cheaper but you can't use the remote with it. I see many cords for Dolphin Premier and don't want to order the wrong one since they're so expensive. Advice?

Update: The cord on the Maytronics Dolphin Premier was broken inside the white plastic swivel and lost contact every few minutes. Maytronics customer support and the local stores who repair Maytronics pool vacuums were not helpful. Some Maytronics vacuums are only sold on the Internet, and some models are bought in stores. The repair stores only want to work on the vacuums bought in stores and the ones bought on the Internet have to be sent back to Atlanta, Georgia for repair if needed. Apparently this vacuum was a model only for sale on the Internet. Part of the communication problems I had may be due to Covid-19 and people working from home. My vacuum does NOT have a serial number or model number sticker on it so I had to spend time researching it to figure out my exact part number. I bought the cord through Leslies.com for $300. It was the same cord as the original, with a length of 18 meters, same as the original. Leslies local store said they would install it for me for no charge, but I decided to try it myself first and I was successful. I had to remove 6 screws and disassemble the top part of the unit, then remove 2 more screws inside that held the cord away from the fan blade. Using needle-nose pliers I was able to unscrew the old cord from the plug and pull it straight out. Installing the new cord was easy and the vacuum works again.
You must log in or register to reply here.
Thread Status
Hello , There was no answer in this thread for more than 60 days.
It can take a long time to get an up-to-date response or contact with relevant users.

H
Dolphin A30i shutting down w/ new swivel cable - is it the swivel?