I have now had my Dolphin (Maytronics) Active 30i for 2 seasons.

The good : it cleans my fiberglass pool with steps & ledges very well. The basket design is great & it seems even to get the fine silt stuff in addition to the big stuff.

The bad (I have posted a review about this issue on this board before): The @#5^*$ cord twists & tangles so much that after 1 use I have to take it out & leave the cord straightened out for a couple of days to be able to use it again. This issue is worse my second season with this robot. I should also say that in the off season i did not leave the cord rolled up - its was completely uncoiled & straight for several months. I can only imagine what it would have been like had I left it coiled on the cart all winter.

This twisting/tangling issue is so bad that after about 30 min of use in the pool the cord in effect is very short & wont allow the robot to travel. In fact, it even upends (but does right itself) because of the cord tension.

The cord has so much stress on it that I wonder how long it will last before some electrical issue occurs - and I have already had to replace a bad power supply under warranty. Since this robot only has a 2 yr warranty it makes me worried.

To me the issue looks very simple - the cord is too thin. It needs to be beefed up like my old Aquabots that never had this issue.

Another negative is Maytronics. I have tried to contact tech support on several occasions - cannot even talk with someone- it seems as if they don't want to talk with me ....until its out of warranty. It also took a couple of months to get a new a new power supply. In short.....buy an Aquabot or some other non-Maytronics Brand. Thankfully, my local Maytronics dealer in town will service it (i bought it locally & not online) as I suspect I will need it.

Now..after much frustration I did come up with a solution that has been doing very well for the past few weeks. A picture is attached:

I had to sacrifice a garden hose, a pool noodle, and some waterproof duct tape. I split a garden hose down its length with a razor then placed the robot cord inside it. (Wish I would have used a blue water hose for aesthetics in retrospect but had a spare green hose I was willing to sacrifice. I quickly found out that garden hoses dont float - so if you can find a water hose that floats you may not need the noodle. I had to play around a bit to find the optimal positioning for the noodle float segments but basically the segment closest to the robot it is far enough back from the robot to allow it run the floor of the deep end. I then placed a few more noodle segments spaced along the length of the cord. Thats it. It has worked so well with no twisting at all thus far, leading me to believe maytronics could easily fix this issue. Even if they simply had a retrofit cord cover that floated, this would be a non issue.

If the cord twists up like you are describing, usually it is something wrong with the robot itself. Maybe its not turning in both directions like it should be. I've only ever had an issue like this with any robot when my dual motor robot was having a problem with one motor. It would just turn and turn and twist up the cord.
O

Good point & I wish that would be the case. However, it seems to turn very well in all directions.

When I got the new power supply they said that Maytronics had installed new software to prevent this from happening, which makes me think they know this is an issue. I certainly didnt notice any difference though.

My Dolphin S300i is only a few months old so my cord is practically brand new. But here's what I learned about these units and the cord - you must NEVER coil the cord over your forearm like many people do with extension cords. You should always roll the cord into a large coil or otherwise use the "over-under" coiling technique. I have the caddy, so storing my cord is very easy as there is ledge on the caddy to hang a large loop of coiled cord on. I also "roll" my cord into a big coil so as to not introduce any twists in the cord.

Other than that, the unit is supposed to execute equivalent numbers of CW and CCW turns every cleaning cycle so that the cord does not twist into loops. I can honestly say, after months of cleaning, my cord is always straight in the pool or has, at most, one or two loops in it.

With a bad power supply already under your belt at less than 2 years, it sounds like your unit may have issues. Are you able to get the cord replaced under warranty? I'm sure if you show them pictures of the problem, you might be able to claim a defect and get it covered. 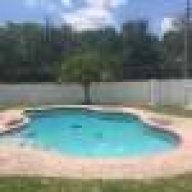 The s300i and Active30i now come with a swivel cord according to the website.
You must log in or register to reply here.
Thread Status
Hello , There was no answer in this thread for more than 60 days.
It can take a long time to get an up-to-date response or contact with relevant users.

R
Replacement pool robot - what are feelings on cordless?