Does CYA drop in a hot tub due to the heat?

After reading multiple threads about it, I recently converted to chlorine from bromine when I drained and refilled our tub. We chose bromine initially because my wife is very sensitive to chemicals, and has had a reaction to chlorine in pools in the past. The bromine was somewhat okay, but caused my wife's nose to itch, and definitely has a bromine smell. We've been using the chlorine tub for about a week now and love it. My wife has had no reaction to the chlorine at all, there is no smell in the tub, and no smell left on the skin.

I have used dichlor to build up the CYA level to 34 ppm by calculation. I was just reading a thread in the deep end about CYA being lost due to heat, including bright sun and the water getting over 90 degrees. Our tub is in the garage so there is no direct sun, but the temperature is kept between 90 and 100+ degrees. Since I set up my test kit for bromine, I do not have the test for CYA. Will the CYA dissipate over time in the tub? I have assumed up to this point that it would work to get the CYA level where you want it by calculation and that it would stay at that level, minus a small amount of carry out, until refill. Is that assumption wrong? As far as I can remember, there is nothing about CYA dissipating in the write-up about using chlorine either here or on the pool and spa forum. Do I need to get the test for CYA for my test kit setup?
M

I think it "drops" due to water evaporation and then replacing it with fresh water. I might be wrong though. 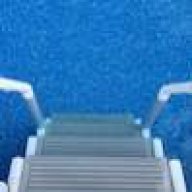 I've repeatedly read here that CYA degrades by about 5% per month, but there are times in my tub that it seems to go faster than that. I rarely add water to the tub, so evaporation or splash out is definitely not the problem. When I fill the tub with my already balanced pool water CYA seems to disappear at an even faster rate, so I dose with dichlor at first and monitor CYA weekly. As the level rises I switch off to bleach but continue to monitor CYA at least monthly, when it drops I dose with dichlor again. Continually using dichlor will increase CYA pretty quickly so you have to find a balance.

Your information is helpful. I just went back through Nitro's thread that you linked, and I find nothing about the CYA dissipating, even in the follow on posts by chem geek. In fact, Nitro suggests that you don't need to test, and chem geek seems to support that idea. Some posters on this forum have suggested that spa water can be replaced as infrequently as once a year, depending on use. I went six months on my first fill using bromine, and I will want to keep the water as long as is practical. I wonder if making an assumption of something like 5% CYA loss per month is a workable solution instead of regular testing?
A

Wojtowicz describes a chlorine loss rate due to oxidation of CYA at 12.5% per day at 85F which is roughly consistent with a 30%/3.6 = 8.3% rate especially since his 12.5% number came from FC levels starting higher (5.4 ppm for indoor pools, 7.6 to 9.2 ppm for outdoor pools). So, assuming a CYA loss rate of around 0.4 ppm/day in our pools this comes to 12 ppm per month which is clearly enough to be noticeable as the months pass during a swim season. If one shocks the pool, then the rate of loss could be about 2-3 times faster.

Wojtowicz also shows a strong temperature dependence on the chlorine oxidation of cynauric acid where every 10F increase in temperature results in roughly doubling the rate of degradation. So his data was with pools at 85F so pools at 90F could have degradation rates about 1.4 times higher.
Click to expand...

There is a large range in what people report here on how fast it goes away. Some say 5 points a month, I lose about a point per day because of heavy use and shocking the water.

The effect can snowball if you don't check. For example, add enough for 30ppm. You can shock to 12ppm chlorine at that level. A few weeks/shocks later, and cya might drop to 20ppm, but you're still shocking to 12, when you should only be shocking to 8..... max. The extra chlorine burns up the cya even faster.

I recommend buying the cya test kit, and testing monthly. When your test results are predicable, you can test less often.

I also recommend higher cya levels than 30. 60-80 give more buffer on chlorine levels. I run mine at 100ppm cya(and shock to the mid-30s), although that tends to interfere with the PH test cause chlorine needs to be 10 or lower to test PH.
M

I thought CYA never dissipates...? I thought nothing other than draining water and replacing will lower CYA?
M

I've read in other posts that the only thing that will break down CYA is soil bacteria which may come from algae that builds up from a covered pool in winter or a pool/hot tub that is not maintained. Maybe some of the bacteria people bring into hot tubs might cause some breakdown in the CYA? Although if properly sanitized, I am not sure the bacteria will live long enough. Just a thought.

But other than that, water replacement was the only way I was aware of dealing with CYA.
A

I am interested in this also as I just switched over to chlorine. Love, love, love chlorine over bromine!
A

I've read in other posts that the only thing that will break down CYA is soil bacteria
Click to expand...

I don't think this is true. Chlorine will clearly oxidize it.

Perhaps this not as noticeable in pools due to lower chlorine levels and temps so it's not talked about as much on TFP. But it comes into play with hot tubs.

I also suspect the the advice to lower cya levels in a pool before doing a SLAM to save on bleach may be unnecessary in a lot of cases. The SLAM itself will lower cya due to oxidation, and the higher cya levels will lower chlorine dissipation from the sun and evaporation, thus negating the supposed chlorine savings. But I don't have a pool, and the advice has been repeated so many times now here at TFP, that I doubt anyone would listen to me.

Someone would have to admit they were wrong after all.
M

The various ideas, especially those by @ant 83, are helpful. I have decided I need to buy the CYA test reagent and tools. Best to gather my own results. I was hoping a chemist, ie. Matt, would weigh in on this question though.

What I do is whack a 3 inch puck with a hammer into chunks, and grind the chunks up into powder with a mortar and pestle. I add the powder in small amounts to reduce PH. This offsets the slow rise in PH that happens over many days from adding beach.

It evens out the CYA loss from oxidation. Adjustments in CYA can be done by adding buffer to make it go up, or partial water changes to reduce it.

Results will vary depending on the alkalinity of your fill water.

Trichlor is VERY acidic, and it does not take very much to knock down PH a few notches.
You must log in or register to reply here.
Thread Status
Hello , This is an inactive thread. Any new postings here are unlikely to be seen or responded to by other members. You will get much more visibility by Starting A New Thread

A
Black Flakes in Hot Tub