Do I have algae now titled ... GREY MONSTER SLIME MYSTERY

This year I ditched the normal doses of algaecide in favor of the maintenance I learned in here.

the water is clear and the chemistry is balanced. I check on the FC frequently to keep my SWG on target. What I noticed today is grey slippery slime on the pool walls, mainly near the tile line and the crevices of the step. It brushes off quite easily and flakes into the water. I have not really seen this much before - occassionally I would feel it on the inset of the return outlet and the light and just brushed it away.

Now it is more prevalent although the water is in great shape. Is it some sort of grey algae I am getting? If so, what to do?

Your posted numbers certainly would not imply algae....they are great.

However, "slippery" is disconcerting and would seem to indicate something organic. Typically, algae growth is greenish so that further adds to the mystery.

How long has your pool been painted? Can you take a white towel and rub on the paint to see if any color comes off?

After all that, algae is still the most likely suspect. Has your FC been allowed to drop for periods of time?
S

Paint is fine. The FC has been in range - save maybe a day if that much. Still the CC is solidly 0-0.5 all the time since shocking a month ago so it's not like there are organics being chew up.

The only thing I can think of it some kind of crud building in places where the brush is not getting. Truth be told, I am brushing a little less this summer (rotator cuff tendonitis).

Your suspicion might just be the case. The "gray" color is a little puzzling. I usually find very vibrant green algae in little hidey places but can't remember anyone on the forum ever reporting gray. Still, It's the most likely explanation given what's been ruled out.
S

It's grey alright. Like wet dryer lint. Is there a way to confirm I wonder?

I'd see if I could gather a good sample of it and put it in a bucket of unchlorinated water for a day to see if it grows. I'd then add 1/8th teaspoon bleach per gallon of water and see if it kills it. Report back if you're able to get this done.
S

I found some hanging out by the vacuum port and started a culture.

The more troubling question would be if it IS paint, why would THAT happen in my case? Perhaps it is another organic/inorganic in the pool.

Here is a picture of the stuff, for what it's worth. Definitely slimy but it's is not green. 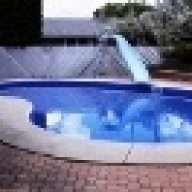 I had CYA levels over 200 when I recently moved into this house, the previous pool person had just been dumping pucks into the strainer hoping for the best I guess. When I did a nearly complete refill I had an algae bloom that required shocking the pool to 50ppm FC (CYA was still at 100 or so), this took care of the bloom and cleared the water.

...however, after my levels stabilized and I had the CYA at 60 I also noticed the walls of the liner feeling more and more slippery (CC was less than 0.5ppm). I tried brushing and brushing everyday, it just didn't seem to do much. So I shocked the pool again, this time to 25-30ppm and held it there for five days...I brushed everyday while it was shocked. It took a while but when I backflushed the pool every couple of days there was definetely something in the pool, the filter water was greenish white and milky. When I worked in water sanitation slime mold was a consideration we had to worry about since it was nearly clear and formed a biofilm on everything. I don't know if this is what I had (I didn't test it) but the prolonged shocking process got it out.

Today the liner walls are squeeky clean and the bottom is too, you may want to consider a longer shock period, biofilms are hard to remove and the FC takes a long time to work on it at lower levels.

My first culture was tossed out accidentally but after a week vacation I have come back to much more of the stuff and started another culture. I am very suspicious this is some sort of algae or grey slime. no I am even seeing a little green algae for the first time ever (so much for my new life of no added algae prevention). The FC has definitely not dipped below proper level so I am a little stumped here.

Here in the northeast I am getting closer to closing the pool. Is this something that should die off in the winter (I assume it hates to get frozen) or must it be definitively killed prior to closure.

I tried some googling and other than pink algae than can form grey colonies - there is no reference to any grey algae. Perhaps it is fungal or bacterial - and if so - I assume shock is an all purpose rx?

One other thing that is probably worth mentioning is that even/because of my adding borates this year, the pH wants to stay at 7.8-8.0 range. I am going through lots of acid. I assume this promotes an environment more favorable to microbes rather than hovering at the 7.6 level.


Any advice - please chime in - it's greatly appreciated.


shacke said:
I tried some googling and other than pink algae than can form grey colonies - there is no reference to any grey algae. Perhaps it is fungal or bacterial - and if so - I assume shock is an all purpose rx?

One other thing that is probably worth mentioning is that even/because of my adding borates this year, the pH wants to stay at 7.8-8.0 range. I am going through lots of acid. I assume this promotes an environment more favorable to microbes rather than hovering at the 7.6 level.
Click to expand...

As described in this paper and this paper, algae growth rate peaks at a pH of 7 and falls off as the pH approaches 9. However, what you have doesn't sound like algae, but more like some sort of mold or bacterial biofilm. I think 4JawChuck's advice may be your best bet with superchlorination and vigorous brushing to completely kill off what you've got in the pool.
G

Yeah, that sounds like a biofilm to me. Can one do a hyper-decontamination on a painted pool like we can do with spas? That's what it took to get rid of the bio-slime in my spa; chlorine 100 ppm for a period of time. (I actually did it for longer than recommended as we had a neighborhood emergency while I was treating. It stayed at 100 ppm for several hours and then I lowered it to 50 ppm, via partial drain refill, until I could finish the next morning. Not really good for the equipment and surfaces to do it that long but it certainly killed everything.) I tried twice, using commercial spa flushes, at twice the recommended dose for 24 hours, each treatment, with a good standard level FC shocking period afterwards and that did not knock it out. It took the hyper decontamination to get rid of it. BTW... if it is bacterial is is unsafe to swim in the pool.

Question for 'xperts. In the case of a pool where draining and refilling is not as practical as a spa could one use the very inexpensive chlorine neutralizer to quickly lower FC after treatment? Would it leave an undesirable residue of any type? I purchased a bottle of it, granular, from Leslie's, to use in my spa when the Bromine is too high. The bottle will last me beyond my lifetime and probably that of my grand children.

It is really, really, cheap.

Thanks - I started the shock-n-brush campaign. I seem to recall having bits of this stuff pop up in recesses (light, return port) but it has taken a liking to the tile line now in a big way and on some walls. I am happy to reach such detente with it again but first I want to really blast it out of there.

I would be interested in knowing about the Cl neutralizer GG spoke of in this situation since - if I have to get that nuclear - I cannot drain my pool effectively. Still I am hoping a few days at shock level is what is needed.

Use of a chlorine neutralizer such as sodium thiosulfate would be fine. So you could super-chlorinate at a high level, kill off what is there, then lower the chlorine level with a chlorine neutralizer. Though I've heard about this being done in spas quite a bit, I haven't heard this done in a pool so don't know how effective it will be since the temperatures are lower. Longer exposure times might be needed. I'd lower the pH first to at least 7.2 before super-chlorinating since it's going to raise the pH quite a bit. If your pool has a saturation index near zero, you might promote scaling during this process. At least you've got some borates in the pool that will help to buffer the pH.

I like 4jawchuck's idea of simply following a prolonged shock process and keeping the numbers within (or fairly close to) the guidelines pre-established.

That can be done without concern and, if it fails, another more exotic method could be considered.
S

Could it be that I have 'white water mold'?
C

Yes, what you describe sounds like it might be white water mold. White water mold is like tissue paper on the surface of the water and in pipes and on surfaces. It falls apart easily and is readily brushed away. What you have might be some kind of mold (fungus) like white water mold though it doesn't seem to fall apart as readily or it could be bacterial forming a biofilm. It is unlikely to be algae as it is not green or colored since by definition algae is a plant and has chlorophyll which makes it colored, usually green or yellow/mustard -- even black algae when smeared on a white piece of paper is dark green.

Traditional shocking normally will get rid of white water mold and normal chlorine maintenance usually prevents it from returning. It is most commonly seen in Baquacil pools since the mold can develop a resistance to Baquacil.
S

Thank you Chem geek. I will see if 3 days of shock levels, backwashing and brushing will have done the trick.
S

Just an update, 3 days of shock did not do the trick. I am going to try again with a longer shock time and also use a supplement (Aquafinesse pool pucks I found online). It may be overkill or unecessary but this slime is very persistent and for me it's worth the money to hit it from 2 flanks. Should be easier now at season's end where swimmers wont eat up FC.
You must log in or register to reply here.
Share:
Facebook Reddit Pinterest Tumblr WhatsApp Email Link

A
SLAMing the Green Monster